No, it’s not just you: Google’s search results may look different right now, thanks to a very large “bucket” test currently underway, which has dramatically changed the look-and-feel of Google’s list of blue links. Most notably, the search result links are no longer underlined, the fonts are larger, and ads don’t have the usual yellow-colored background, but are rather just flagged with a small yellow label that says “Ad.”

Google often runs experiments like this to determine whether or not a change is either financially viable, benefits its user base, or, in the best case, both. Often, these tests fly under the radar, but in the case of something as significant as Google’s search results pages themselves, it’s hard not to notice when they change.

Some users are able to see both the current design and the new design when they switch between browsers, but your mileage may vary, as they say. (In my case, I see the new results in both Safari and Google’s Chrome browser on Mac.)

According to a report from Search Engine Land, Google’s head of search, Amit Singhal, told the audience at the Search Marketing Expo West conference this week that the changes users are seeing were just an “experiment” as per usual.

However, the company points out to us that these changes were actually announced last fall for mobile and tablet users. This update, then, could be seen as an extension of a broader series of changes already in the works, meant to better unify the desktop and mobile experience.

As for the yellow “Ads” labels, those also were originally introduced on tablet and mobile, before being later tested on the desktop. Google notes that they’ve been testing these new labels for several months now, in fact.

Though this may still be “just” a test, this particular experiment has been rolling out to more and more users as of late, which can indicate that the company is aiming for a wider release in the near future. 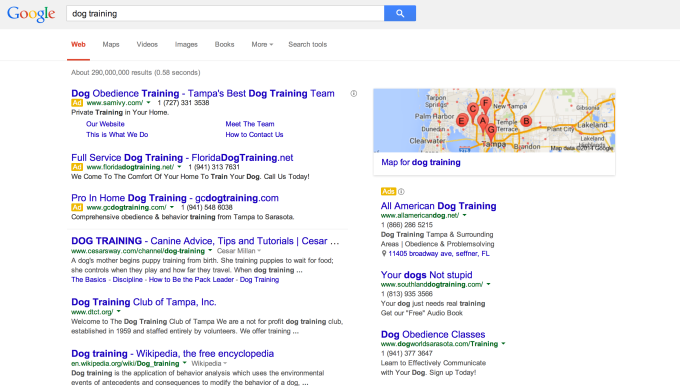 UPDATE: Google on Wednesday officially announced the changes, in a post on Google+, copied below:

You may have noticed that Google Search on desktop looks a little different today.

Towards the end of last year we launched some pretty big design improvements for Search on mobile and tablet devices (mobile first! :-). Today we’ve carried over several of those changes to the desktop experience.

We’ve increased the size of result titles, removed the underlines, and evened out all the line heights. This improves readability and creates an overall cleaner look. We’ve also brought over our new ad labels from mobile, making the multi-device experience more consistent.