PayPal, the eBay-owned online payments platform that made up some 40% of its $16 billion in revenues in 2013, has turned on a redesigned website — it’s biggest attempt yet at putting a contemporary, simplified face on one of the older services on the web (founded: 1998); and to introduce users to some of the newer features it’s hoping will take off, such as mobile and physical store payments.

The design was first announced last month but with little detail as to how the pages would look. Now, users in countries like the U.S., UK and France can see for themselves.

On first arriving, a site visitor finds a much more simplified “front door” that is banked on a full-screen, 15-second silent video clip that changes with each visit (or each refresh). The clip is slick in a very familiar way, reminiscent of the video Facebook used to have to promote its Android launcher Home, along with the homepages of countless other apps. In the middle of the silent video is a single call to action (“send money now”, etc.). One example illustrated above, and another here:

The idea behind taking away a significant portion of the text is to make the the whole experience more “mobile first,” in the words of Christina Smedley, PayPal’s Global Brand VP. So, too, is the touchscreen-friendly scrolling beyond the video, which introduces other services further down the page. Again, these are light on text and heavy on images.

(And yes, for those who are not visiting PayPal for the first time or don’t really care for the new song and dance, you still have a list of simple, utilitarian tabs at the top that take you directly to different actions on the site to pay people, request money and so on.)

This is not the first aesthetic update PayPal has made to its site in recent times. (It made another in back 2012, for example.) But as with the company’s general direction under new president David Marcus, you get a sense that it’s trying to accelerate how it iterates and keeps up with the times.

With all the noise that activist investor Carl Icahn has been making, arguing for eBay to spin off its PayPal payments division, that acceleration and growth are taking on perhaps an even more urgent note under the wing of the e-commerce giant.

Touchscreen-friendliness aside, what is perhaps most important about this round of refreshes to the website is that it’s part of a wider overhaul, both at the front and back ends, and deeper into specific services within PayPal.

“Imagine this as our new ‘front door’ to PayPal, the pages behind will also reflect our new approach over time,” Smedley writes. “So although the homepage and more will have this new look and feel, we continue to chip away at the rest of the older content that doesn’t reflect the very best of what we want to bring to you. More to come on that.” She doesn’t mention StackMob, the mobile backend service provider that PayPal acquired in December 2013, but you have to wonder if this is exactly where they are playing their part.

(These are not new features, PayPal notes.)

But there will likely be more to come. I’ve seen promises of PayPal improving the user experience on third-party merchant sites — for example, making it unnecessary to go to new, PayPal windows to pay for things (perhaps a response to the very simplified UI of newer entrants like Stripe). But just earlier today I had to pay for something via PayPal and although I can see the new interface for PayPal in the UK, the merchant experience looked and behaved just as legacy-bound as ever.

Looks like I’m not the only one to notice that.

I think #paypal has redesigned their homepage about 3 times.. but the internal application still hasn't been touched.

This also points to another issue, though. Given how widely used PayPal is by third-party merchants on their own sites, updating will involve not just PayPal, but trying to get these thousands of partners on board as well.

PayPal noted in February that it will be rolling out the new look across all of its 194 markets eventually, but not all countries are seeing the new look yet. Take Portugal, for example — a reminder what all users were getting when logging into PayPal not that long ago. 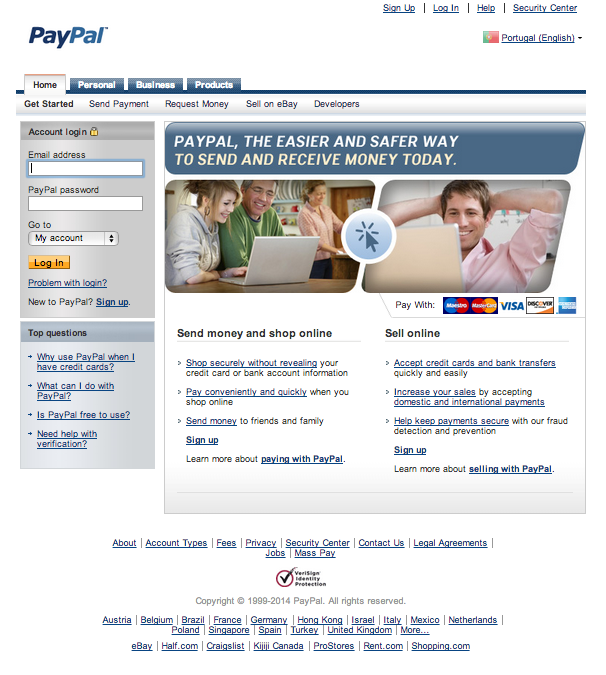