The Blackphone, a security-focused smartphone from Silent Circle and Geeksphone, is kicking off pre-sales today after an official unveiling back in January. The Blackphone is billed as the “world’s first smartphone which places privacy and control directly in the hands of its users,” which essentially means that it offers a forked version of Android called PrivatOS and comes pre-loaded with apps that offer special privacy features.

Blackphone retails for $629 for an unlocked handset, with specs that keep up with most standard Android gadgets in that range, including a 2 GHz quad-core processor, a 4.7-inch IPS display, LTE connectivity, 2GB of RAM, 16GB of storage and an 8 megapixel rear/1.3 megapixel front camera. Those specs aren’t set in stone, however: official PR dictates that they could be subject to change before the phones actually start shipping in June.

The privacy tools include Silent Circle’s apps, which include Silent Phone, Silent Text and Silent Contact for secure, private handling of each of those features via encryption so that only you and someone receiving said communications with a compatible device can access the contents. There’s also a Wi-Fi connection manager for greater security on public networks, and a software that makes it possible to securely remote-wipe your device, and facilitate its recovery.

Another selling point: PrivatOS will get updates directly from provider SGP Technologies, rather than relying on carriers to approve and deploy them, which could make for even greater levels of security. Plus bundled in your cost of device are multi-year subscriptions to a number of security services, including two years of Silent Circle, two years of Disconnect (secure/non-trackable search), two years of SpiderOak (secure cloud storage), unlimited use of Kismet (Wi-Fi analyser product), and some gift subscriptions to Silent Circle so that your friends and family won’t have to sign up separately to talk with you ‘off the record.’

Blackphone also announced its first carrier partnership — with Dutch mobile operator KPN. Jaya Baloo, CISO at KPN, said: “We’re hoping for hundreds of thousands of BlackPhones to be sold.” She added that the telco is aiming to differentiate itself from rivals by focusing on preserving its users’ privacy. “[We] believe privacy and security is a basic right,” she said. “It’s not about having nothing to hide; but determining what you want to reveal.”

The Blackphone is clearly designed to capitalize on the general paranoia (and justified fear) invoked by the Snowden revelations regarding the breadth of government surveillance.

Asked specifically about this, Blackphone general manager Toby Weir-Jones said: “The Snowden disclosures have certainly raised awareness. But our plans to make a secure phone have been in the works for longer.

“We’ve never made the claim we’re offering an NSA-proof device, but we are offering a tool that makes a huge difference to someone who’s using no privacy tools at all,” he added.

Whether Blackphone will translate into significant sales remains to be seen. All those subscriptions sound like a lot of work if you want to keep up the cloak, but it could be worth it if you’re the type of person who doesn’t put a price on peace of mind. 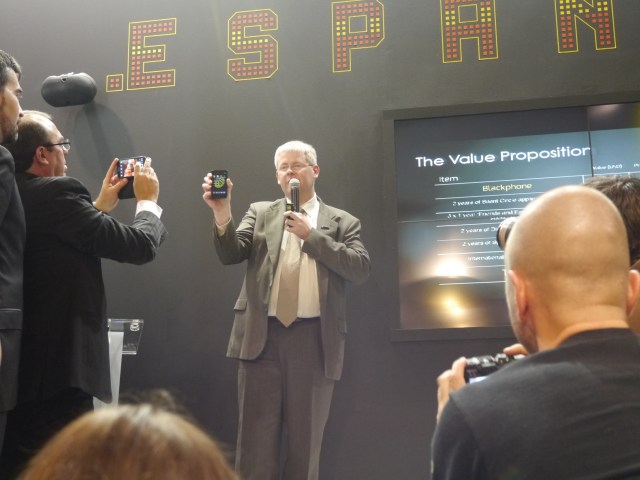