With 450 million monthly users and a million more signing up each day, WhatsApp was just too far ahead in the international mobile messaging race for Facebook to catch up, as you can see in the chart above that we made last year. Facebook either had to surrender the linchpin to mobile social networking abroad, or pony up and acquire WhatsApp before it got any bigger. It chose the latter.

Facebook recently said on its earnings call a few weeks ago that its November relaunch of Messenger led to a 70 percent increase in usage, with many more messages being sent. But much of that was likely in the United States and Canada where the standalone messaging app war is still to be won.

Internationally, Facebook was late to the Messenger party. It didn’t launch until 2011 after Facebook bought Beluga, and at the time it was centered around group messaging where SMS was especially weak.

WhatsApp launched in 2009 with the right focus on a lean, clean, and fast mobile messaging app. And while the international messaging market is incredibly fragmented, it was able to gain a major presence where Messenger didn’t as you can also see in the chart above.

Unlike PC-based social networking, there is no outstanding market leader in mobile messaging. Still, WhatsApp absolutely dominates in markets outside of the U.S. like Europe and India.

[Update: WhatsApp was much more popular than Facebook in several large developing markets, according to data from a small survey conducted by Jana Mobile and published by The Information (which requested we remove the graph of the data). In India, Brazil, and Mexico, respondees were 12X to 64X more likely to say WhatsApp is their most used messaging app, compared to Facebook. Those are big countries with tons of users that Facebook needs.]

It’s also impossible for Facebook to acquire certain other Asian competitors like WeChat, which is the one hope of Chinese mega-giant Tencent to have a global consumer product.

So it’s clear that WhatsApp had strategic interest to Facebook, and we know that the two talked from time to time.

We made the map above using data from Onavo, another Israeli-based company that Facebook acquired for — ahem — competitive intelligence. Because Facebook scooped up Onavo for more than $100 million in October, we don’t have access to active usage data anymore. The only thing outsiders can see are app store rankings, which imply download rates and not current usage. 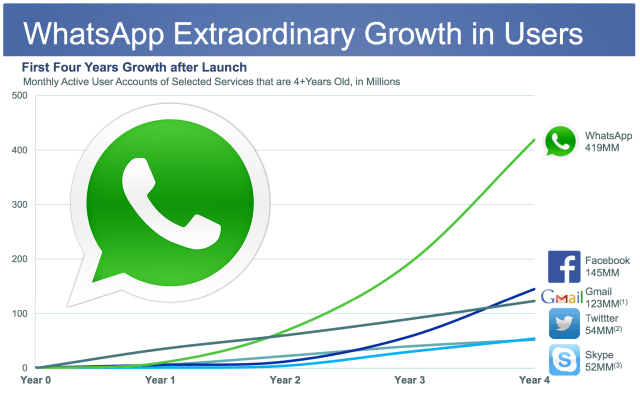 So what happened in the last year? WhatsApp looks to have pulled so far ahead of Facebook in developing markets that there was no way to catch up. Mark Zuckerberg said in a post today that the app was on its way to reaching 1 billion users.

We’ve heard Facebook has been interested in buying WhatsApp for two to three years. We reported in 2012 that Facebook was in talks to acquire WhatsApp. But over the past year, it became clear that Facebook couldn’t afford not to pay whatever it would take to get WhatsApp on its team.

So the answer to Facebook’s problem ended up being $19 billion.

Apparently, that’s what it took to take Jan Koum and his backers at Sequoia Capital (the fund that Zuck originally spited) out of the market. If it waited any longer, that number probably would have just gotten bigger.

You might wonder how WhatsApp will ever earn back the money it cost to buy, but this acquisition wasn’t about increasing Facebook’s total revenue. It was about surviving the global shift to mobile.