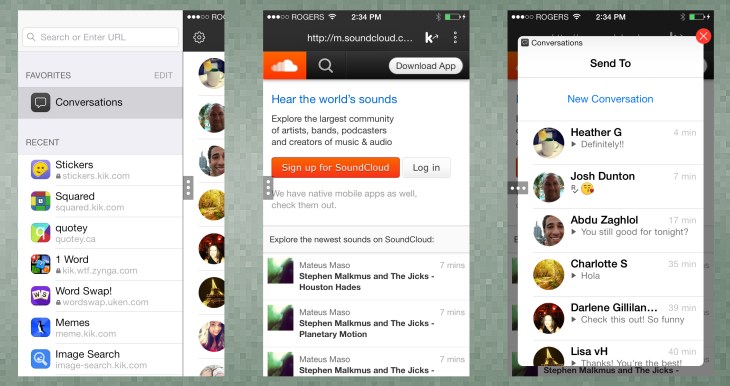 Kik has a new version out today that makes it the first messenger app to offer a built-in browser experience that’s integrated into messages themselves for easy sharing. The browser is designed to capitalize on the popularity and abundance of HTML5 in mobile-optimized websites, and should lower the bar for devs looking to offer an in-app experience for a large messaging network.

Kik had previously worked on a way to get HTML5-based interactive content into its app to make it easier for its users to find, share and have conversations around content. That effort was called ‘Cards,’ and it debuted back in November 2012, ahead of Kik’s most recent funding announcement last April. Cards represented a huge investment in the idea that the way to stand apart from the rest of the mobile messaging field was to bring apps and web content within the experience, and the new in-app browser is an extension of that vision.

“We’re going to be the first smartphone messenger with a built-in browser, and that’s really exciting for us because now the pitch to developers is much more clear,” explained CEO and founder Ted Livingston in an interview. “Before, it was like ‘Hey Soundcloud [for instance], you should build a Kik card and submit it to us and we’ll make a decision.’ Now it’s like ‘Hey Soundcloud you’re already on Kik.”

The new browser looks the same as the one used for Kik card integration, which goes beyond using just a standard Safari frame in-app by providing easy search for Kik-optimized sites and more intelligent sharing that makes it easy to find your most commonly used web applications. Devs that previously built Kik cards still get priority, coming up first in the browser tray when it’s open depending on what keywords users search for, but now even if something isn’t in Kik’s directory, users can find it by typing in the URL direct.

For Kik, this will hopefully mean that selling developers on the next step becomes easier. Livingston noted that they can now go to sites like Soundcloud and essentially say ‘Hey, you’re already on the platform, and you’ve got X number of users sharing Y amount of content. Why not take the next step?’ In this case, the next step would be adding some of Kik’s basic APIs to their existing code (a few lines that would amount to a couple of minutes of work, according to Livingston) in order to optimize their site for Kik and make it appear higher up in the Kik browser search results.

Kik is doing well in terms of signing up new users, with 100 million announced on the platform before the holidays. Livingston isn’t sharing new figures yet, but he says that they had an “amazing holiday season,” and notes the app climbed to number nine on the free app charts on iOS in the U.S., and number 10 in Google Play as well, and the only other private company to break the top ten on either platform during the period besides Kik was Snapchat.

Livingston talks about Kik’s HTML5 content push as a route to monetization, noting that discovery now offers it a chance to do something with promoted content. But until now, the Cards mechanic, while well-executed, has seemed daunting to outside developers. Rethinking their strategy with a focus on pointing out how the in-app browser works with existing made-for-mobile content should help drive new partner platform buy-in.

Kik has a new version out today that makes it the first messenger app to offer a built-in browser experience that’s integrated into messages themselves for easy sharing. The browser is design...