Kathryn Minshew wanted to be Zorro when she grew up. Like, literally, the guy with the mask and the cape. “I was like, ‘I’m going to learn how to use a sword and wear a black mask.’ I would honestly answer that when people asked me what I wanted to do for a living.”

While she didn’t quite make it there, what she did end up doing is nothing to scoff at. After paying her dues as a management consultant at McKinsey, Minshew started looking online for her next gig and ended up frustrated at how clunky the job-search process was.

“I could sit in the McKinsey office in downtown New York City searching for business strategy jobs, and Monster is telling me I should be an Assistant Manager at a 7-Eleven in Secaucus, New Jersey,” she said. “LinkedIn is showing me 5,402 results with no sense of which one might actually be the most interesting or relevant. I was like – are you kidding me? THIS is the best we can do?”

Minshew decided to stop complaining and ended up building out the tool she wanted to use for her search into her own company, The Muse, which helps people figure out what to do for a living.

In addition to catching the eye of the recruiters at Y Combinator, The Muse has grown to 1 million active visitors a month, since we first covered them in September 2011. It has also brought in some new money, announcing a $1 million seed round today from Tyra Banks, Alexis Ohanian, Dan Rosensweig, Sallie Krawcheck, Chris Herrmannsen, Tracy Brennan, Mike Walsh, Ruth Ann and Bill Harnisch, Anjula Acharia Bath, Gordon Crawford and WGI Group. 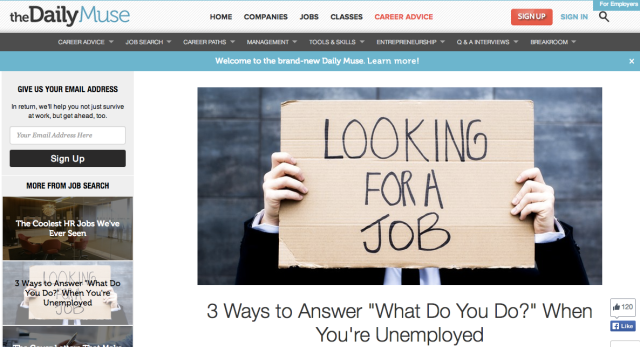 The site, which was co-founded by ex-McKinsey consultants Alexandra Cavoulacos and Melissa McCreery, aims to take on incumbent job-search portals like Monster.com and Careerbuilder, by going beyond the “death of a thousand rectangles” that Minshew compares the traditional online job hunt to.

“If you told me you wanted to work at Coca-Cola, we could find you 10 mutual connections between the two of us who could get your foot in the door,” she said. “But if you don’t know where you want to work — LinkedIn’s not going to help you.”

She thinks that The Muse’s added value is that it provides guidance, in the form of simply designed stories and videos, about workplaces that job hunters would not normally consider.

The individual packages for The Muse subscribers are created in-house. And becoming a subscriber isn’t as simple as paying thousands of dollars upfront; The Muse staff cherry-picks the 150 companies like Pocket and Uber who advertise their job openings on the site. Much like Y Combinator, not everyone who applies gets in.

She considers The Muse’s unique selling proposition to be the strength of its job-seeking community, as well as the caliber of its employers, which is held together by the content the site produces. “There’s a selection bias both on the individuals that apply for jobs, and the startups that apply,” she says. “If we have terrible companies on the site, that doesn’t bode well for us.”

Like her Zorro ambitions, Minshew again hopes to accomplish something pretty impossible — create a job-listings site that people love. And yes, she, too, is hiring.