People may warn you that parenting can be a tougher job than you expected, but they never seem to warn you that it can be a lonely one, too. Mom Meet Mom, an up-and-coming service built by three women who have struggled with this difficult, but often undiscussed, aspect to parenting, is trying to help.

Having kids changes everything, or so they say. And while it brings joys of its own, your social life can easily go down the drain, too. You can no longer drop everything to rush out for dancing and drinks. A date night turns into a $100+ affair once you factor in the babysitter. And even if you could afford these things at every turn, you still have obligations to…you know… actually be around your kids sometimes.

Mom Meet Mom, which is most easily understood as a sort of “Match.com for moms,” was founded a couple of years ago by longtime friends, Julia High, who has a background in computational cognitive neuroscience, and Christa Terry, an independent editor and content developer for websites. The two were later joined by Meg Gerritson, whose background is in advertising.

High says that the idea for the site came about after she moved from D.C., where she had spent years working for an area think tank, to Seattle. Her eldest daughter was one-and-a-half at the time, and meeting new parents, especially moms, was a challenge, she says.

“I was spending time at playgrounds…and either everybody was already in one of those groups – you know, where you look over and all you see is backs,” she explains. Or when she did meet someone interesting, there was that awkward moment where you have to try to get the mom’s number – “without being in a bar and having a beer first!,” laughs High.

So High and Terry decided to do something about it, and build a website where moms could connect with others for not just playdates, but also real friendships. Around a year into development, Gerritson reached out – she had been working on a similar site of her own. So the three decided to combine forces.

The new site, which launched last year on Mother’s Day, originally focused on the Boston area where two of the three founders now reside. It has now grown to over 10,000 users and expanded nationwide, where it’s currently gaining traction in NY, Seattle, and parts of California, in addition to Boston.

Unlike competing services where moms congregate, like Meetup.com, which has more “mom meetup” groups than any other meetup category, Mom Meet Mom is not about organizing group activities. Instead, it’s about matching two people based on their personalities, interests and values – not entirely different from a dating website, as it turns out. Playdates would be involved, of course, but they’re not the only reason for signing up.

After registering, and filling in some brief data about yourself and your children, you’re walked through a questionnaire where you answer questions about you, your kids and family. You’ll also drag a slider to answer various personality questions, like – are you shy, outgoing, energetic, calm, creative, ambitious etc.? 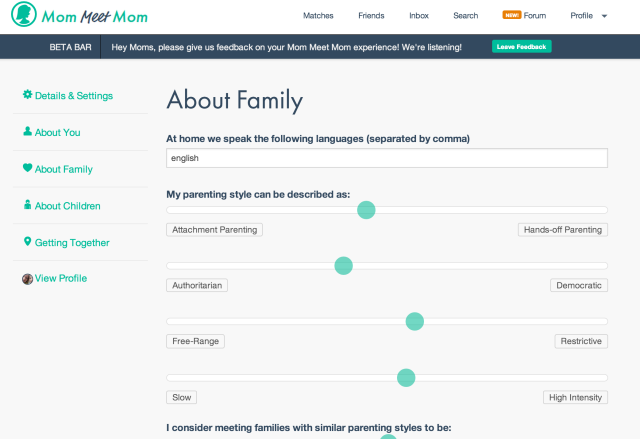 When answering questions about some topics, like religion, politics, diet, and more, you can also drag the slider to indicate how important those items are you to. That is, are you looking to commiserate with other moms whose kids have severe allergies? Or are you interested in finding parents who share your same beliefs?

You also tell the site about your schedule and availability, and whether you’re a working or stay-at-home parent.

The end result, in theory, is that Mom Meet Mom will find you matches. (This is more likely in the areas where the service has an established user base, however.) From that point forward, it’s up to you how to take action. The site offers a messaging component, but even though you’re both there for the purpose of finding other mom friends and playdates, someone still has to take the initiative to reach out. Mom dating is hard!

The founders say they’re now adding hundreds of new members each week. And they’ve been getting the word out on places like Good Morning America, DailyCandy, StrollerTraffic, and other mom-focused blogs and news websites.

The company is currently bootstrapped, and will be ad-supported for now, with plans to introduce premium (paid) features in the future. Further down the road, a mobile app may come into play, too, as 70% of their traffic is mobile. But for now, the site is mobile-optimized and that’s working out well, says High.