In a move that could give brands and publishers more insight into what to tweet, today Twitter is rolling out Analytics For Twitter Cards. The dashboard shows impressions, URL clicks, and app installs of a publisher’s tweets and mentions by other users, as well as easy ways to measure favorites, retweets, and follows. If Twitter can teach publishers how to create better content, the service as a whole will become more informative, engaging, and monetizable.

Twitter has provided a basic analytics tool for all users since June, though many people don’t know it exists. But Twitter card publishers and advertisers will gain access to the new in-depth analytics dashboard over the next few days, and developers can check out details on how it works on the documentation page. You can check out this video which explains its features in more depth than Twitter’s blog post:

Instead of only showing insights on a publisher’s own tweets, the analytics measure the impact of all tweets to a publisher’s site. Twitter tested out the product with BuzzFeed, NBC News, Time Inc., ESPN, MLB, Flipboard, Etsy, Foursquare, and Path, but soon it will be available to anyone using Twitter cards.

On the dashboard there are three tabs at the top for URL clicks, install attempts, and retweets. You can select a date range to see details for that time period. A high-level snapshot shows how many links to your site have been tweeted, how many impressions they’ve received, and how many clicks.

A Card Types tool lets you compare your metrics against the average Twitter publisher, and provides tips that highlight what’s working best for your account. For example, you might be getting the best click-through rate and much higher rate than other accounts when using the Summary Card, so Twitter will suggest you use more of that one.

The Influencers sub-tab helps you determine which other accounts are giving you the biggest boost. If there’s some web celeb who always tweets your links and they drive a ton of traffic, these analytics could inspire you to build an even better relationship them. 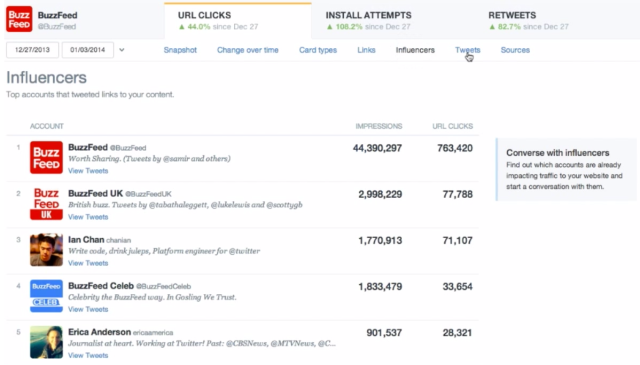 Analytics For Twitter Cards also provides dedicated stats for your own tweets, and the ability to track how your follower account has increased over time. it even provides demographic breakdowns of location, gender, accounts your followers follow, and their top interests such as “mobile” or “open source”. Meanwhile, the Sources sub-tab shows what interface people tweet about you from, such as TweetDeck, Twitter’s website, or Twitter for iPhone. For now, there doesn’t appear to be a way for users to opt out of having this information shared with the accounts they mention. 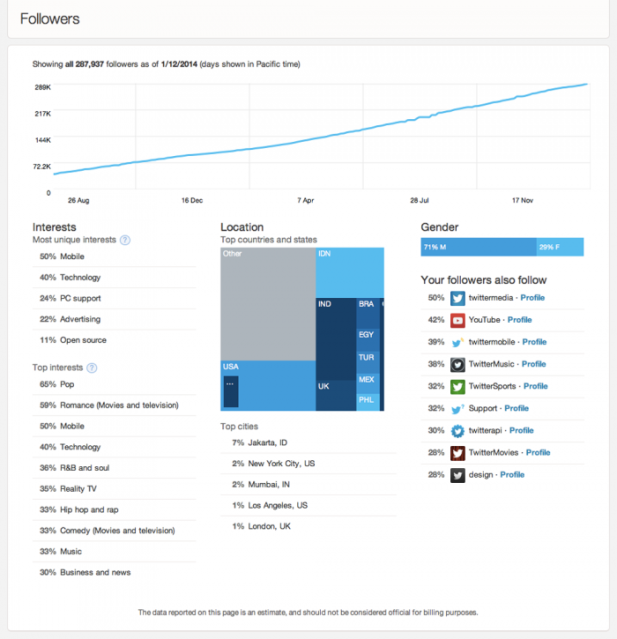 Two parts of Analytics For Twitter Cards that are sure to grow more important with time deal with app installs. The Devices sub-tab that shows what percentage of users who view your Cards have your app installed, while the App Installs tab shows how many clicks to the app stores your Cards generate.

With millions of apps available for download, the app stores are becoming hopelessly cluttered. The only organic way to really gain big traction is to the the top charts, but to do that you need to hit a threshold of installs. Twitter’s App Install Cards, including paid ad App Install Cards, can give developers the boost they need to reach the charts. These new analytics could give them the confidence to spend more on Twitter’s App Install ads. The same paid app discovery business has been big for Facebook, and could be a highlight of future Twitter earnings calls.

Until now, Twitter’s most important content creators have to some degree been tweeting in the dark. The analytics dashboard could let them hone their publishing strategy, whether they’re trying to gain widespread mindshare through retweets, drive specific business objectives through URL clicks, or grow their audience for the long-term.

And that won’t just help publishers but Twitter itself. The better content it’s filled with, the more informative people will find the service, and the more often they’ll come back and see its ads.