Entelo launched in late 2012 to join a new generation of startups attempting to leverage technology to help companies address the age-old struggle with finding and recruiting great candidates, particularly engineers. To do so, Entelo has developed software that aims to help companies, HR departments and recruiters use alternative means and data sources (namely social) to search for and identify top talent.

Last summer, with 80 corporate customers having adopted its recruiting software — including the likes of Groupon, Square, Box and Yelp — Entelo took on $3.5 million in Series A financing from Battery Ventures and Menlo Ventures, among others. Since then, the company has turned its attention to mobile and to the dearth of quality enterprise productivity tools available for mobile devices.

While people want to use their smartphones to be productive, says Entelo co-founder Jon Bischke, today, the world of mobile enterprise productivity is limited to email. However, as enterprise software companies (particularly SaaS companies) begin to provide apps and services that allow employees to be more productive on the go, things are beginning to change, he says.

Capitalizing on the ongoing “consumerization” of the enterprise and productivity software, Entelo recently launched its first mobile app, Entelo First Pass, which Bischke says takes several cues from the consumer product world, especially the popular dating app, Tinder. The founder says that the product design goal behind Entelo’s new mobile app was to create an equivalent to the “Tinder for recruiting” — in other words, one that makes the process of discovering the best matches during the recruiting process simple and easy — and hopefully, more addictive.

“We found that recruiters and hiring managers spent a huge amount of time on triage, particularly in finding candidates to source and moving candidates through pipelines,” he says. “After trying multiple different approaches, we ultimately found that the easiest way to help companies was to take a similar approach to user flow as Tinder, and so we set about attempting to replicate that experience in a way that works for recruiting.” 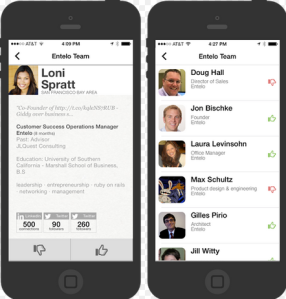 Primarily developed by an ex-Twitter engineer who the company found using its own hiring software, First Pass is intended to be the mobile companion to its enterprise recruiting software, meaning that, at least initially, access to First Pass will be limited to Entelo customers. (However, Bischke says that the company will likely add a public, freemium version at some point in 2014.)

In practice, this means that, once teams have created lists of candidates using Entelo’s software, they can then view and evaluate those candidates while on the go. Like Tinder and other consumer applications, users can quickly swipe through candidates, upvoting and downvoting as they go. The idea is to transform the experience of using enterprise recruiting and productivity software into a more familiar, consumer product-like feel and maybe even make it slightly enjoyable — relatively speaking.

For those unfamiliar with the company’s recruitment software itself, Bischke and co-founder John McGrath created Entelo to leverage the ever-advancing technologies behind this Brave New World of “Big Data” (and data mining) that everyone’s talking about. In other words, Entelo has developed a massive database of tens of millions of potential job candidates, tracking and aggregating data on the activity and statuses of candidates’ contributions to StackOverflow and Github, their locations (gleaned from Twitter) and updates to profiles on LinkedIn, for example.

When we last covered Entelo, the co-founders described the key difference between Entelo’s software and the other enterprise recruiting services out there as the attempt to create a more robust resume than one typically finds on Facebook or LinkedIn. That is, to create a more detailed profile of a candidate’s job status, qualifications and contributions by analyzing data inputs from a wide range of sources, particularly social.

As the platform accrues more data about candidates, the idea is that Entelo’s predictive analytics in turn become more accurate, and are able to better understand and identify the signals and footprints that developers leave across their networks. In particular, those which might have recently changed jobs or are quietly looking for new positions.

First Pass, then, makes Entelo’s core products, including its candidate search tools, predictive analytics and its dashboard for monitoring those candidates available in simplified form for mobile.

However, alongside the launch of First Pass, the company is also releasing a new product, called “Entelo Inside,” which takes the company’s realtime social data, search tech and predictive analytics and applies them to a company’s applicant tracking system. The idea, Bischke says, is to help companies unlock more value from their tracking systems and more easily identify candidates for current jobs from those that may have already applied.

Since September, the company has grown its headcount from seven to 15, secured a partnership and integration with Jobvite, and its enterprise customer base, which includes names like Box, ESPN and Yelp, has grown to more than 100.

For more, find a quick demo of First Pass below: