Why bother with a gift registry or wish list, when you can just pin favorite products to a Pinterest board? With newly launched iPhone app LoveList, you can do just that, even when you’re out shopping in the real world. The app lets you quickly expand your Pinterest collections with products you find on store shelves, simply by scanning an item’s UPC barcode.

The app itself is a side project created by Cincinnati-based Brad Mahler, currently a creative director at global digital ad agency Possible, and Mark Tholking, an independent iOS developer located in San Diego, who previously co-founded BigSho. The two have known each other for nearly a decade, after meeting through the same agency where Mahler still works.

The idea for LoveList, explains Mahler, was prompted by his own shopping trip out in the real world.

“My fiancée and I were shopping and we found an item we wanted to add to our Amazon registry,” he says. “We keep a Pinterest board for that purpose, so as my fiancée was pinning it she asked, ‘why can’t I just scan this to Pin it?'” Mahler knew this would be possible, but no one had built a tool that made that easy to do yet. (Pinterest’s own app lets you pin places, photos or links, but not actual products via barcode scans.) 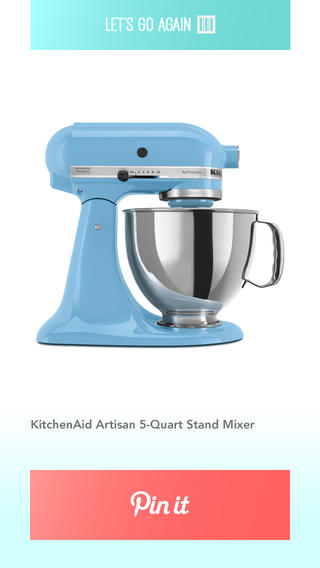 Mahler adds that he believes Pinterest works best when pinned products are actually available for purchase. As it turns out, this has been a problem with Pinterest for some time. According to mobile commerce vendor Branding Brand, almost 60 percent of Pinterest traffic to retailers’ sites during the 2013 holidays came from those in search of a product that doesn’t exist anymore. And this figure has been over 50 percent since the service launched. Of course, pinning real-world items to Pinterest doesn’t necessarily solve that problem. Eventually, those items could also disappear while Pinterest continues to recycle their links.

Mahler says they built the LoveList app quickly. It went from an idea to proof-of-concept prototype in a day, and not too much later, it went live in the App Store.

Not surprisingly then, the app is exceedingly simple. Similar to how you can use Amazon’s app to scan items and add them to a wish list, LoveList also lets you scan barcodes while out and about. That’s all it does, too, which means it takes fewer taps to do so than with Amazon’s own flagship application. You just scan, tap the board you want to pin the item to, and you’re done.

Currently, the app is only connected to Amazon’s own product database, which, while large of course, is still limited. But Mahler says they want to quickly put LoveList in the hands of users, and hopes to add support for large and small individual retailers in the future, including those with online stores.

For now, the app is a paid download at $0.99, but they’re considering an affiliate model and retailer partnerships further down the road.

LoveList is certainly a useful tool to have on hand while shopping, but until it expands beyond Amazon.com products, it may not be worth moving away from Amazon’s own wish listing feature just yet. (Unless you’re heavily into Pinterest, or never use Amazon wish lists, perhaps). Plus, Pinterest could also just as easily add a barcode-scanning function to their own app if such a behavior proves to be popular, which could be a problem for LoveList if it doesn’t grow its feature set to offer more than product scanning.

LoveList is available here on iTunes ($0.99). Below, a quick demo video. (And thank you for not choosing that cloying Apple-esque music everyone is using now.)