Apple’s latest iPad spot demonstrates that tablets have general purpose computing strengths that have never been exhibited by laptops.

Laptops have had decades in the spotlight as our portable computers of choice and were on their way to eradicating desktop machines before tablets came along. But they’ve never managed to exhibit the flexibility of purpose that tablets can.

Apple’s spot presents examples of people using iPads in various real world situations, which is a note they’ve struck before. But this particular spot focuses not just on the things that people are doing with iPads, but specifically things that would be cumbersome, irritating or impossible with a laptop.

It’s a brilliant rotation of the argument that tablets can’t be ‘seriously’ used to create.

In many ways this is the realization of the dream for the original ‘tablet computers’ of Microsoft — something you can view with more or less irony depending on what chances you give the company of succeeding in a crowded space.

It’s not that you can’t use a laptop to do any of these things. I’ve used a laptop as a tethered shooting companion for photography for years now. Seeing instant feedback as I shoot speeds up the process and makes editing faster, it’s great. But I’ve never wanted to use a laptop. They’re bulky, they’re not the right form factor and they’re not optimized for easy one-handed operation (not counting the one you hold them with, thank you). And some of these cases, like diving, present an impossible challenge for laptops. They’re simply not the right tool for a lot of jobs.

And I think that more of the jobs laptops aren’t any good at are becoming part of our lives every day.

It’s not as if laptops (or desktops) are going to go away over night, but they’re definitely going to fade in importance as new general purpose computers like the tablet and smartphone grow bolder. And they’ll work in concert to allow us to do stuff better — I wrote this piece on a combination of phone, tablet and computer as I’ve been traveling. 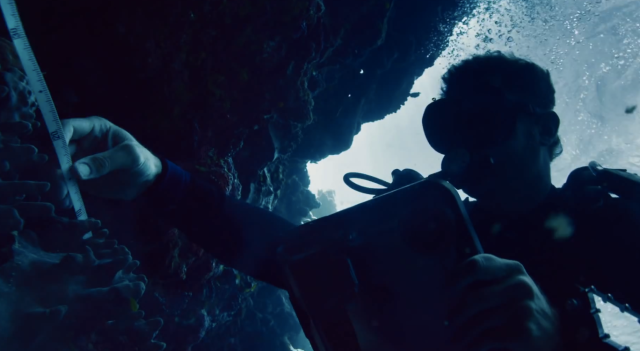 There will always be things that will be accomplished more efficiently with a dedicated keyboard and a device that allows us to perform several tasks ‘simultaneously’. But neither of those are sacred cows limited to laptops. If you pull the thread a bit technology-wise it’s not hard to see machines that run off of the power of our phones or tablets without having to have dedicated CPUs. Just flip open your display and keyboard and start typing, with your pocket computer doing the calculations.

The spot isn’t just a good ad for iPads, though I think it is pretty good. It’s also a case study in what makes tablets in general such good ‘general purpose’ computing devices. I’m under no personal illusions that Apple will maintain dominance over the tablet market forever (and I don’t think Apple is either). Android is getting better with every iteration, and they’ve been improving rapidly in the areas that matter for the scenarios described in this spot.

To illustrate, the iPads here, for the most part, are being used in conjunction with apps written by developers for niche professional use. Those apps were written for iOS because it’s a more friendly environment for niche developers to sell apps in. But there are factors shifting that balance as we speak.

Google is heavily investing in improving its developer services and even now offers features that many of the iOS developers I speak to speak about with envy. Supportive beta testing frameworks, built-in a/b testing and translation services and a bunch more stuff that just makes developer’s lives easier. Which is good, because the nature of Android devices means that the testing and polishing stages of developing on Android are a massive undertaking in comparison to iOS.

There’s still a sort of ‘social proof’ that needs to happen in the Google Play market — namely that Google needs to demonstrate Android users are willing to pay for these kinds of utilities. Even that, though, is being subjected to disruption. Recent data shows that for pay apps are even more endangered this year than they were the year before, etc. All of that plays into Google’s hands fairly well with Android, though I do think that a market for paid apps with specific use cases will always exist.