Apple’s iBeacon technology, which uses Bluetooth LE to send notifications to users when they’re inside a physical store, is making another mainstream advance today: Shopkick — the location-based offers startup that was one of the early movers with its shopBeacon service — is today announcing a new retail deal, installing iBeacon functionality in 100 American Eagle Outfitters stores nationwide, including locations of sister brand Aerie.

This will become the largest deployment of iBeacons in apparel sales to date — although there have been others in different retail sectors, with Apple started rolling them out across all 254 U.S. stores in December 2013, and inMarket is adding iBeacons to some 200 Safeway and Giant Eagle grocery stores. (Eagles appear to figure prominently with iBeacons.)

For Shopkick, the move follows a Shopkick trial in two Macy’s stores in November 2013, which was, at the time, the first retail trial of the technology.

Like Macy’s, American Eagle Outfitters is a longtime partner of Shopkick’s — it was in an American Eagle Outfitters store in Times Square that Shopkick launched its first alerts app back in 2009. That original and still-live technology is a mixture of hardware and software: Shopkick gives participating retailers a piece of hardware that it has designed itself that works by emitting very high frequency signals that trigger actions on a person’s phone, and the app installed on it, when they walk through the doors of a store. Retailers used a dashboard to pass deals and other messaging via those signals.

What iBeacons allows is for more targeted and specific messaging, say depending on a particular section of a store, and also a much easier and low-cost rollout. 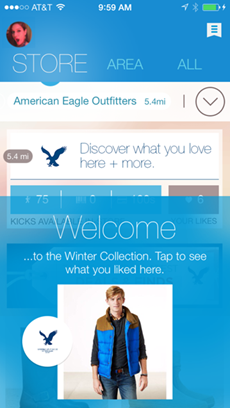 For the American Eagle Outfitters rollout, Shopkick says that shoppers will get a welcome message when they enter an American Eagle Outfitters, with details of location-specific rewards, deals, discounts and product recommendations in the store. (Getting those alerts when in specific locations in the store are coming soon, the company says.) The key is that these messages get pushed without customers needing to open the app — as they would have had to do with Shopkick’s earlier technology. Products that a customer tags when not in the store will also get reminders to search for those items when entering the store.

Cyriac Roeding, the founder and CEO of Shopkick, has hinted to me in the past that existing customers of Shopkick’s legacy technology are likely going to be early partners for what the company is now doing with iBeacons. So following that logic, expect to see news coming from the likes of Best Buy, Crate and Barrel, JCPenney, Old Navy, The Sports Authority and Target, as well as consumer brands from large FMCG companies like P&G that also promote product offers directly through Shopkick’s app.

For these companies, it’s a way of developing a more constant relationship with customers and trying to leverage new technology to drive more sales — key at a time when large portals like Amazon and online-only retailers are vying to become the first port of call for consumers. While brick and mortar retail is still vastly bigger than online commerce in terms of overall sales, there are signs of a lot of pressure on traditional retailers to continue innovating to keep customers interested. Just today, Best Buy announced disappointing results for the holiday sales period, leading to a statement from CEO Richard Schulze vowing that it would continue to keep pressing ahead with new ways of reaching consumers.

“AEO has always been an early adopter of cutting edge technology, which is why we are partnering with Shopkick once again, in order to provide our customers with the best mobile shopping experience available today,” said Joe Megibow, SVP of Omni-Channel eCommerce at American Eagle Outfitters.