Just before the holidays, a new mobile marketing platform targeting brands and agencies, Carnival, quietly made its public debut. Based in New York and New Zealand, the company is aspiring to chart a course similar to what Buddy Media did for social on the web, but for mobile campaigns, engagement and retention.

Mobile, of course, is quite a different beast from social, but it’s one that the company’s co-founders have a lengthy experience with.

Shortly after the iPhone debuted, Carnival CEO Guy Horrocks, CTO Cody Bunea and others began creating some of the first applications to ever run on the iPhone – before there was even an iTunes App Store. Through their company Polar Bear Farm, they had at one time reached 6 million downloads of their apps for jail-broken iPhones when there were only 10 million iPhones. They even drew the attention of Apple, Horrocks notes. At an Apple developer conference just ahead of the announcement of the iTunes App Store, an Apple employee told them that about half his company wanted to shut down Polar Bear Farm, but the other half was running its software.

Over the years, the co-founders also contracted for Tapulous to create Twinkle, one of the first Twitter clients for the iPhone. And later on, after selling their stakes in Polar Bear Farm in late 2008 to start Carnival, they began building apps for brands like Kraft Foods, Gerber, HBO, Dreamworks and others. They also worked on startup’s apps, like Ptch (acquired by Yahoo) and Voxy.

In other words, the pair has been active and invested in mobile for years. And, explains Horrocks, their experience building apps and working with brands allowed them to spot what they believe is an untapped opportunity in mobile today.

“All these [brands] are producing a lot of apps, but they don’t know how to maintain them, and they don’t really focus on the users after they launch them,” he says. “And the other part of the problem is that a lot of these brands have multiple apps…but most of them are very siloed.”

At Carnival, which has now shifted from being an app-building agency to a mobile platform maker, the goal is to aggregate all of a brand’s users in one place, so they can run analytics on that user base, and allow the brand to run various campaigns, targeting users with content through push notifications, in-app messages, contests, and more.

The platform lets brands reach users using more standard content like text, photos, videos and links – which could be delivered in a “News Feed”-like experience within the app or pushed to the end user’s device via a notification. But Carnival supports other, more interesting or interactive content, too, like coupons, sweepstakes, or polls, or even sending users a fake FaceTime phone call. Users can also be geo-targeted (including via geofencing), or targeted based on other metrics like loyalty, engagement, device, or software version, for example.

(The FaceTime call happened to be tested on One Direction fans, 50 percent of whom accepted the opportunity to FaceTime singer Harry Styles when the band arrived in their city during its tour. The call is actually a mockup of FaceTime with a pre-recorded message designed to boost ticket sales.) 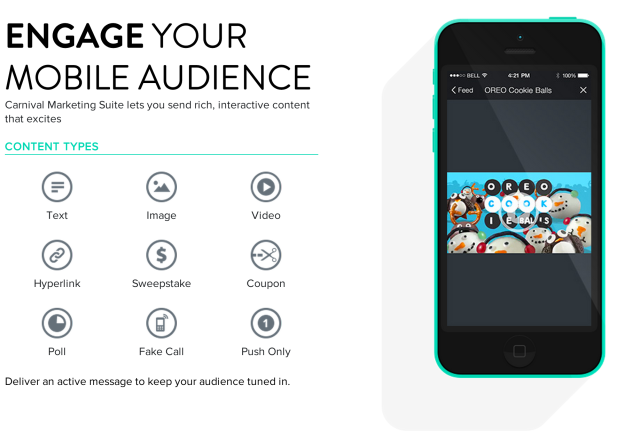 Many of the things Carnival handles are the kinds of things that many other mobile platform makers provide today, too, but Horrocks believes there’s a need for a platform that specifically targets brands that have different goals than the typical app or game developer.

The company currently has around 60 branded apps using its SDK, including CNN, TIME magazine, Coca-Cola, Dreamworks, Mondelez (a Kraft-owned brand behind Oreo and Cadbury, for example), and more. These companies (or their agencies) pay Carnival on a subscription basis somewhere in the range of the low five figures to low six figures per year for access to the mobile platform, and additional support, if needed. The long-term plan is to grow that base and push them to six-figure contracts.

“A lot of brands are still treating mobile like a billboard. They build an app and do a one-month campaign,” says Horrocks. The guys that are winning are those who “have built an actual audience, utility and value,” he adds.