Twitter has just announced a couple of small but useful updates to its Twitter Alerts system, which allows participating organizations to send out notices to subscribing users about emergencies or disaster areas.

The alerts system gains the ability to pop up an in-app notification inside of Twitter’s apps today, utilizing the same pop-up ‘toast’ notifications that its new apps use for mentions and retweets. The notifications are red instead of blue and will only display if you’ve subscribed to an organization’s alert system.

Twitter says that you can now also subscribe to Alerts as notifications inside its iOS and Android apps by visiting an organization’s profile and tapping the bell icon. 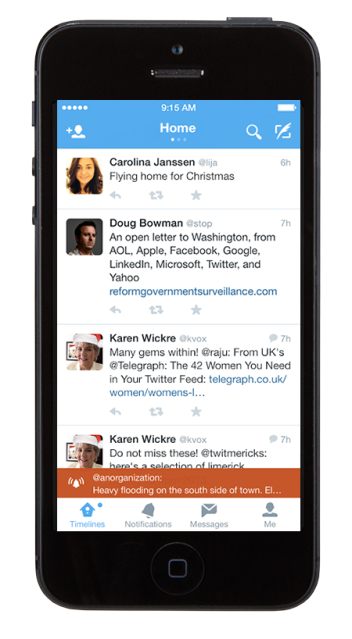 As we mentioned with the program launched, the U.S. Department of Homeland Security has already recommended networks like Twitter and Facebook over other forms of communication during emergencies. And it fits in with the narrative of Twitter as a communication channel rather than a ‘social network’.