Many video apps have come and gone over the past few years, all of which have promised to help users find new content that they might not have already known about. But Showyou is one of the real survivors of the social video discovery scene. And with a major web overhaul and a new mobile app, the company hopes to even thrive.

In a big strategic move in the fall, Showyou put more effort behind its website, making video viewing there just as possible as through its mobile apps. The results have been near-instant and pretty dramatic, in terms of the amount of traffic that it’s seen as a result.

“We always treated Showyou.com as a second-class citizen,” co-founder and CEO Mark Hall told me as he was demoing the new app. In September, that changed, as the company decided to make all 120 million videos available through its apps up on the website. That has had an incredible effect on overall traffic.

The number of minutes spent watching videos on Showyou has more or less tripled, thanks in part to a dramatic rise in the amount of web viewership that the shift has prompted. In addition to the increase in desktop viewing minutes, mobile web has also increased. While not broken out in the below chart, Hall told me that mobile web accounts for nearly half of all mobile traffic. Whereas, you know, before it was all native apps. 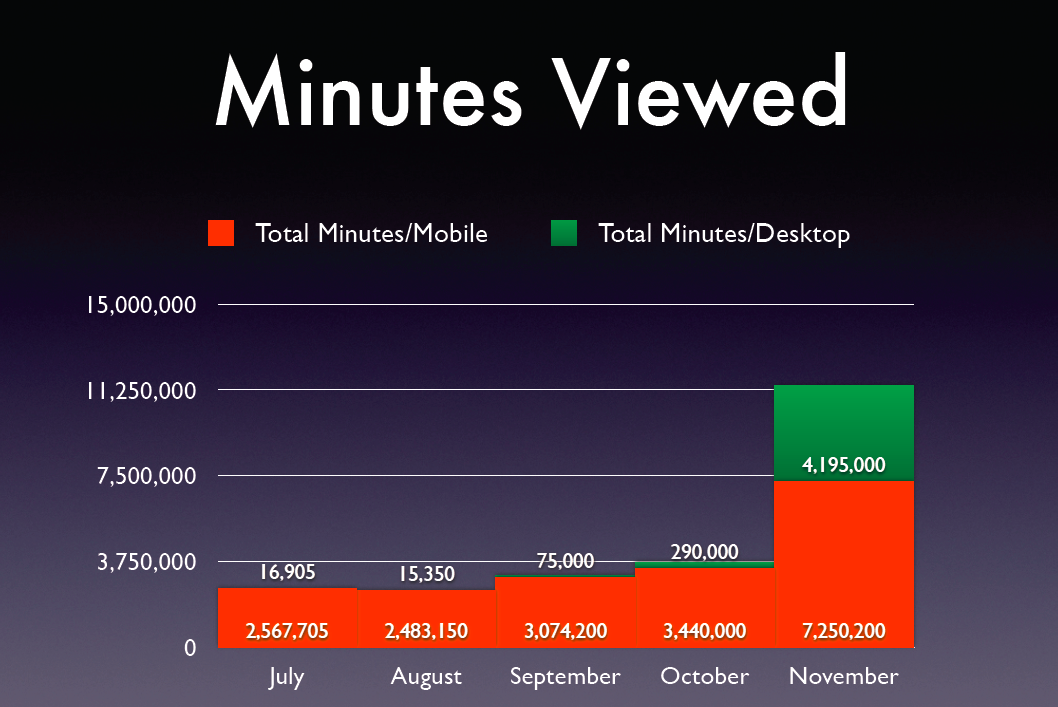 Anyway, originally launched as a tool for discovering and watching videos on mobile and tablet devices, the app has evolved a bit over the years. It started out with that big-ass wall of video, and eventually refined its user experience from there. But Showyou version 5 — can you believe it’s seen that many versions?!?! — is one of the biggest revisions of the app the company has rolled out.

The first thing users will notice is that the newest version of Showyou, for iPhone and iPad, is designed to be a lot cleaner, with all the flat design elements that are evoked in iOS 7. That includes an all-white background that videos are framed by as they expand to be viewed full-screen.

Speaking of… When you tap a video to watch it, the app loads the entire channel that the video comes from, and then slide back and forth to watch the next videos in the playlist. But some of what’s new is actually what’s not in the app — for instance, Showyou did away with its social tray in an effort to make the app as simple as possible.

For now, the update is for iOS apps only, but Android is coming soon. Stay tuned.