Wow, Yahoo just can’t catch a break. Yahoo’s photo-sharing service Flickr went down this morning, in a brief outage that appears to have started around 11 AM ET, lasting for over an hour. The first report of the site’s issues were posted to Twitter around 11 AM ET, but the velocity of tweets kicked in just after noon, which indicates the site may not have been fully down for everyone.

It seems that Flickr.com had been failing to load for users. The message that was returned was “inactivity timeout.” The text on the site read: “Description: Too much time has passed without sending any data for document.” 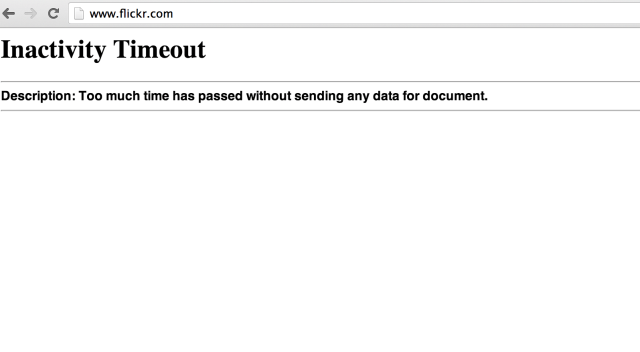 Other users are reporting seeing a cuter error message with a picture of a Panda on a leash. One “flickr down” report came in just a few minutes ago (12:52 PM ET), sharing this photo, so it’s unclear if the outage is only partially resolved. And another showed up at 1:11 PM ET.

(Didn’t Yahoo acqui-hire a bunch of engineers to fix things like this?)

The site has come back up, at least for some, but it’s unknown what caused the problem, how widespread it was, or whether it’s been fully resolved for all affected users.

This has been a bad week for Yahoo. Yesterday we reported on Yahoo Mail’s ongoing outages, and its overwhelmed customer service staff dealing with the numerous requests to reactivate websites that small business owners never wanted shut down. Yahoo’s public response has been minimal. No big mea culpa from Yahoo, and finally after press reports detailing the issues, a few basic tweets and posts which acknowledged the issue and that fixes were in the works.

A reblogged post on Marissa Mayer’s Tumblr falsely claimed “Yahoo Mail Restored.” That is not the case, as the Yahoo Mail Status page still reads:

“Some users may still have trouble accessing their accounts but we are working through the night on this and will post again in the morning Pacific Time with the latest updates.”

As for what’s going on with Flickr, we’ve reached out to Yahoo for more information. Though notably, the company declined to respond to our inquires from yesterday, only posting tweets and posts for us to interpret instead.

Update: A slight glitch – Yahoo didn’t see our email inquiries today because they were sent to deprecated email addresses for press/PR. (Which don’t bounce but don’t route correctly, apparently). We’ve since resent them to the proper main Yahoo account, as of 2:10 PM ET. We will wait for Yahoo’s response and update when and if provided.

For customers who missed the original deadline, we are in the process of reinstating these accounts to give them an opportunity to transfer to Yahoo Small Business so that their services may continue uninterrupted after January 19, 2014.

Once the account is reinstated, it may take up to 72 hours for the websites to propagate and become visible again across the Web. Customers can find more details here:http://tinyurl.com/lp3qbxu.