Adam Jackson and former Stanford physician and White House fellow Dr. Pat Basu want to help modernize healthcare by bringing the house call back — mobile-style. To do that, today, they’re officially launching Doctor On Demand, a service that aims to connect consumers to a licensed U.S. physician via app an on iPhone, Android or tablet — from anywhere.

Well, in saying “anywhere,” that’s the eventual goal. For now, at launch, the service is available in 15 U.S. states for a price of $40 per video call — a price the co-founders believe puts Doctor on Demand on par with most insurance co-pays and cheaper than most urgent care. The idea is to make a quality, experienced physician available to any consumer for just $40.

Because this model is not without its antecedents, Doctor on Demand is looking to remove as much friction as possible from the process, allowing patients to connect with a doctor in real and pay with their Health Care Spending Account, Flexible Spending Account or any major credit card. The other, ancillary benefit (so to speak) of this is the ability to reduce wait times at doctor’s offices and practices across the country, and allow patients to receive quality medical care from the comfort of their couch.

To do that, Doctor on Demand uses a HIPAA-secure network and synchronous video chat to allow patients to communicate with doctors. However, there is a caveat: Doctor on Demand is to be used for “non-emergent clinical issues that do not immediately require a direct presence, lab work or imaging.”

While this limits the network’s utility to some degree, it still covers a significant portion of medical issues. For instance, you could talk to a doctor about symptoms of common colds, fevers, coughs, sinus infections, allergies, upset stomachs, fevers, rashes, eye problems and so on. You can even get your prescription refilled, and upload high-res images during the call so that, say, a busy parent can give the doctor a sense of how their child’s symptoms appeared at their worst. 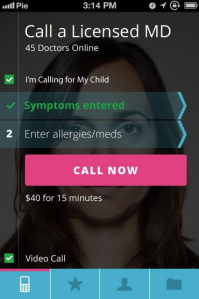 Jackson and Basu tell us that, through partnerships with health systems, their network of physicians has grown to 1,000 nationally and are overseen by Basu himself — the co-founder and CMO (Chief Medical Officer). They are also in the process of putting together a multidisciplinary team of doctors, so that, eventually, when one signs on to Doctors on Demand, they will be able to be routed immediately to a specialist (say an Ear, Nose and Throat doctor) based on the keywords they input from the start.