By teaching a computer to think, Facebook hopes to better understand how its users do too. So today the company announced that one of the world’s leading deep learning and machine learning scientists, NYU’s Professor Yann LeCun, will lead its new artificial intelligence laboratory.

MIT Technology Review first reported that Facebook would launch an Artificial Intelligence lab back in September, but now it has something of a celebrity scientist at its helm. Facebook’s AI research will be split across its Menlo Park headquarters, London office, and a new AI lab built just a block from NYU’s campus in Manhattan.

LeCun has been pioneering artificial intelligence breakthroughs since the 1980s when he developed an early version of the “back-propagation algorithm” that became the top way to train artificial neural networks. He went on to work for AT&T Bell Laboratories where he created the “convolutional network model” that mimics the visual cortex of living beings to create a pattern recognition system for machines. This model was used for optical character recognition and handwriting recognition that powered how many banks read checks in the late 1990s and early 2000s.

Now, LeCun’s knowledge could help Facebook determine exactly what people want to see in their News Feeds, how they want to organize their photos, and possibly more exotic projects.

In a Facebook post this morning, LeCun gave some early details of his plans for the Facebook Artificial Intelligence lab, and noted CEO Mark Zuckerberg will reveal more at the NIPS Deep Learning conference in Lake Tahoe today. 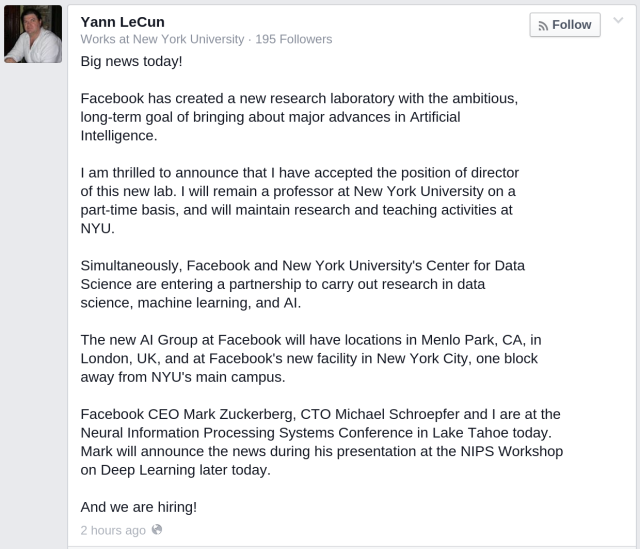 LeCun’s appointment will help Facebook compete with other tech giants as they all seek to gain business advantages and bolster science with deep learning. Google recently hired futurist and artificial intelligence expert Ray Kurzweil as a director of engineering to work on AI projects. IBM’s Watson supercomputer is now working on deep learning. Even Yahoo just acquired photo analysis startup LookFlow to spearhead its new deep learning group.
Facebook has no shortage of problems LeCun could work on. Deep learning could help Facebook recognize and categorize the content of News Feed posts so it could better tell who to show them to. Right now we Like Facebook Pages and status updates to teach its feed algorithm, but Deep Learning could allow Facebook to recognize you frequently discuss topics related to cats, detect posts from friends about cats, and deliver them to your home page.
Photos and videos could also get a big boost from Deep Learning. LeCun could improve Facebook’s facial recognition technology to be more accurate or work on videos in addition to photos. Deep learning could also let Facebook determine landmarks in photos for location tagging, assess which photos from the hundreds you took on vacation are good enough to share, and more.
If Facebook can teach a computer to learn what we like, it could teach us to keep visiting and sharing every day.