Today, Valleywag got its hands on leaked screenshots of Uber’s dashboard, along with a series of numbers from two weeks ago that show raw revenue, signups, active clients and ride request/completion ratios.  TechCrunch has verified with a source that this is Uber’s official dashboard.

TechCrunch also contacted Uber, who said that they would ‘take action’ against the leaker. They did not deny the authenticity of the screenshots and numbers.

The numbers span a period of between mid-October and mid-November of 2013 and allow us to form a picture, though incomplete, of Uber’s income and user statistics over the period. According to our calculations based on the information laid out in the dashboard screenshots — and assuming some similarity in numbers for the rest of the year — the car service should be pulling in over $1B a year in gross bookings. At a rough 20% cut, a figure Valleywag notes Kalanick has alluded to, that would place Uber’s slice of the revenue around $213M a year. 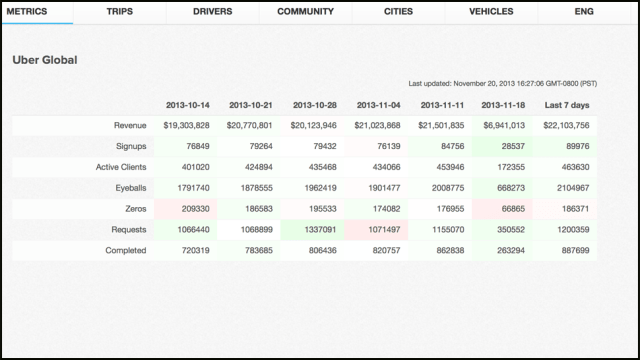 The five week period also showed over 11% in revenue growth, with over 398,000 new signups in aggregate at just under 80k each week. Uber is also clocking around 1M requests every week and completing around 800k each week. The data points to a healthy business which maintains a strong ratio of continuing users to new signups and big ‘conversion’ rates between people who look at the app and people who actually use it.

A recent filing uncovered by Kara Swisher at All Things D put Uber’s valuation at $3.5B, and sources had pegged revenue for 2013 at around $125M. Going by that, Uber is doing significantly better than estimated.

We contacted Uber CEO Travis Kalanick about the leak, and he did not deny that the numbers were accurate. He also had a few things to say about how the story was reported by Valleywag.

“The surprising part is that Valleywag knowingly outed their own source. Valleywag actually knew the screenshot had identifying information of the individual leaker prior to them publishing this story,” Kalanick told TechCrunch in a statement. “We told Nitasha Tiku from Valleywag that we would protect her source from legal ramifications if they did not publish the document. Nitasha and Valleywag decided to publish anyways. We obviously take the dissemination of our proprietary information seriously and we will be looking to take action against the individual leaker and Valleywag source in short order.”

TechCrunch then reached out to Gawker about the details of how the piece was reported. Editor John Cook told us that the screenshots did not, in fact, have any identifying information.

“We didn’t publish any identifying information about the source of the screengrab,” Cook says. “We don’t know who sent us that shot, and neither does Uber. As you know from reading the piece, the person who sent us the information got it after an unidentified Uber employee logged into an Uber administrative console from a computer that our source had access to,” Cook wrote.

“When we reached out to Uber last night, CEO Travis Kalanick helpfully confirmed the veracity of the information by threatening to claim we “outed” our source by failing to redact the timestamp information displayed in the screengrab. What he fails to understand–or is lying about in an effort to smear a critical reporter–is the fact that the person who provided us that screengrab is not the person who logged into Uber’s administrative console. If Kalanick retaliates against that employee, he will be not be punishing our source.”

Regardless of the details of how they were leaked, it seems clear that these are indeed screenshots of Uber’s internal dashboard. And the vehemence of the response by Uber also appears to indicate that the information on the dashboard is revealing.

Note, of course, that the interpretation of the data is not confirmed, and we’re only working off of leaked information here. The math is rough, to say the least and whatever this is, it’s likely not a complete snapshot of Uber as a company. If the readings by Valleywag, and our own crunching, are correct though, Uber is in fantastic shape.

Article Title updated to refer to revenue, rather than profit.