Just in time for the holidays, virtual gift card service Kiind today announced that it now offers an API, which will allow third-party vendors to hook right into its services and to create gift cards from their own systems.

The company also today said that it has added Nike and Apple’s iTunes as gift card options to its store. These are two major deals for Kiind, which already offered gift cards from major retailers like Amazon, Columbia Sportswear and Gap. 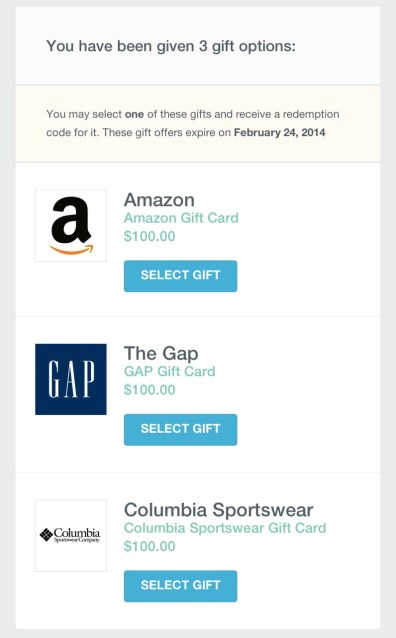 Unlike other gift card services, Kiind’s system, which launched earlier this year, is based on deferred payments. The sender is only charged when the gift card is actually claimed (and a surprisingly large number of gift cards remain unclaimed). For shops like Amazon, Kiind also offers gift givers the ability to pre-select certain items from their stores, though the receivers can always change these selections.

The new API allows developers to easily create and send cards from Kiind, but also to create their own gift card marketplaces based on Kiind’s inventory.

As the company’s CEO and president Leif Baradoy told me earlier this month, the Victoria, Canada-based Kiind has seen good traction in the B2B space and decided to focus on this over making its service available to consumers. In the business world, most enterprises already use similar services to offer their employees or good customers gift cards. Kiind hopes that at least some of these services will use its API to also offer cards through its service. Some businesses, the Kiind team believes, will also integrate this API into their regular CRM or HR tools (and real estate agents, apparently, have taken to it to send gifts to homebuyers after a deal closes). The idea here, Baradoy said, is to extend the reach of the Kiind platform as wide as possible.

As for the relationships with Nike and Apple, Baradoy couldn’t say too much, given that these deals tend to be confidential. He did, however, note that the company likes to create direct relationships with vendors whenever possible. He sees the fact that some of these major brands are now interested in the service as a sign that Kiind “has something interesting going on.”

The company also recently launched a user-based referral program to attract more businesses to its platform. Referrers now get 5 percent of the first gift and 0.5 percent for every gift after.