Firebase, a real-time back-end service for managing apps, has added an integration with Zapier, a platform for connecting services such as SendMail, Twitter and Twilio. The new integration means developers can connect multiple apps without having to do any back-end server management themselves.

A developer using Firebase can now integrate apps that before would have required a fair degree of work. “You do not have to do all these small server spinups,” with the new integration, said Firebase CEO and Co-Founder James Tamplin during a phone call today. It may only be five lines of code to connect a new app with Firebase, but with that comes the need to provision a server, run it on a service and then do the maintenance and everything else that comes with doing it yourself. All that goes away with Zapier connected to Firebase.

Now a customer can use Firebase to connect different services to do a variety of tasks such as email notification. 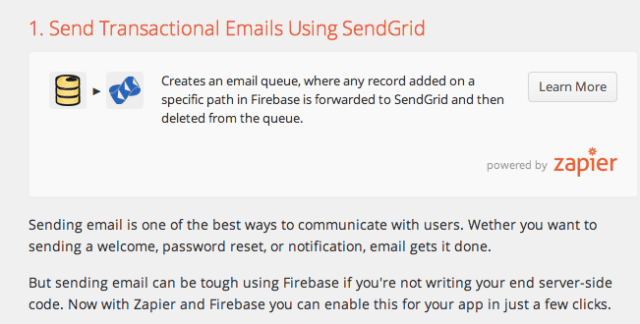 Here are some additional examples.

Developers increasingly just have to learn how to code in JavaScript, use frameworks like Angular and then integrate platforms like Firebase to manage their back-end. It’s this new generation of front-end developers who want to focus on the app, not the back-end that makes Firebase so pertinent. It manages the heavy lifting with its data storage API, which Tamplin says has the real-time capabilities that other back-end service providers do not have.

He describes Firebase as a service that abstracts storage into a sync paradigm. Every time new data is added to the app, the end user sees it without refreshing the browser. With Firebase, developers focus on the app without having to manage any back-end tasks, such as the database or the server code.

API Evangelist Kin Lane writes that this syncing capability makes Firebase a service that can scale from one user to millions without the need to change any code.

The Firebase API is built from the ground up for performance and scale. You simply specify which data you would like to synchronize with each client, and Firebase calculates the minimum set of updates that need to be sent to keep everyone in sync. In addition, all Firebase API functions are designed to scale linearly with the size of the data being synchronized and to shard well into a distributed cloud environment. More importantly, Firebase handles all of the scaling and operations for you. Your Firebase app will scale automatically from its first user to its first million without needing any code changes

With the help of syncing, Firebase handles all the authentications for the apps that a user connects through the Zapier service. That removes a level of complexity that gives users the ability to make apps talk to each other in new ways.