London-based Lifecake, a new photo-sharing service designed for families and built by former Skype, Qualcomm, and Yahoo engineers, is launching out of beta today, backed by an additional $1.1 million in seed funding. The round was led by Balderton Capital, and comes on top of a previous $300,000 angel round from earlier this summer.

Also participating in the new round were Techtopia, a team of London-based entrepreneurs and fathers, who were among Lifecake’s first users. Meanwhile, the company’s seed round investors include EC1 Capital, Serge Alleyne, and several of the founders’ former colleagues, like Tony Saigh and James Peck. 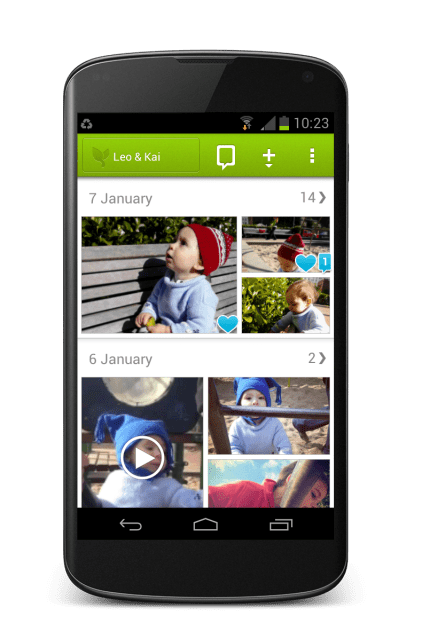 Lifecake, which competes with similar startups including 23snaps, Origami (now acquired by eFamily), and Notabli, is primarily a photo and video sharing service. Users can upload their digital memories from their devices or PC, even dragging and dropping in large folders, if they choose. Lifecake will then organize their photos in a chronological timeline, using the metadata associated with the file, and will tag items appropriately.

Lifecake co-founder Nick Babaian says he was inspired to build a more private photo-sharing service for families following his nephew’s birth. He had flown out to San Francisco to visit the family’s latest addition, but when he returned to London, he felt cut off from the experience.

“We would Skype once in a while, but it never really worked because of the time difference,” explains Babaian. So last summer, he got together with Ed Botterill (former Skype, Microsoft), Matt Sheppard (former Qualcomm, Yahoo, and social games startup Zattikka) and Pete Triplow (former Qualcomm and Zattikka) to try to solve problem of keeping families in touch. 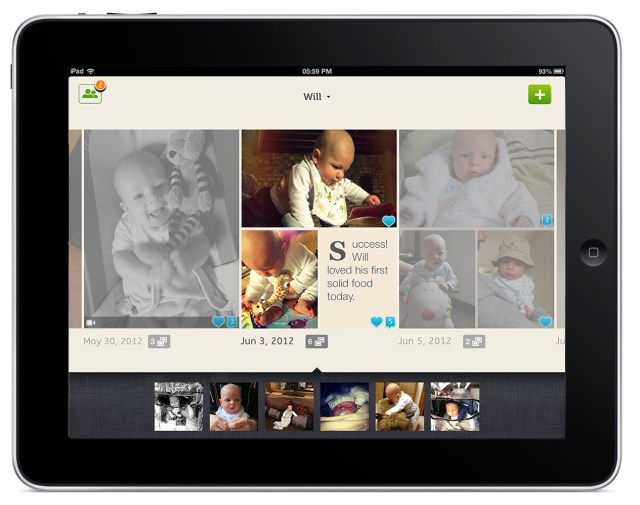 They must have worked quite a bit, as it turns out, because at launch, Lifecake has apps for iOS (iPhone, iPad, iPod touch), Android, Mac, Windows and web which is almost unheard of for such young companies. “It was a huge challenge,” Babaian admits. “But if you want to build something for family, it’s not really useful unless everyone can use it,” he says.

While the service shares a lot in common with competitors, what makes Lifecake interesting is an algorithm they’ve built to better highlight the most popular content users share, which is ranked based on comments, likes, and other engagement metrics. For example, photos pulled in from Facebook are weighted higher than those stored on Google+ (Picasa) because they’re more likely to have been thoughtfully and purposefully shared, rather than simply backed up. The algorithm also looks at words surrounding content, like “love,” “amazing,” or “beautiful,” for example, which would rank a piece of content higher.

The new funding will be focused on making this ranking engine as smart possible, so it can pick up other social signals based on how users interact on content, says Babaian, as well as on other usability improvements. 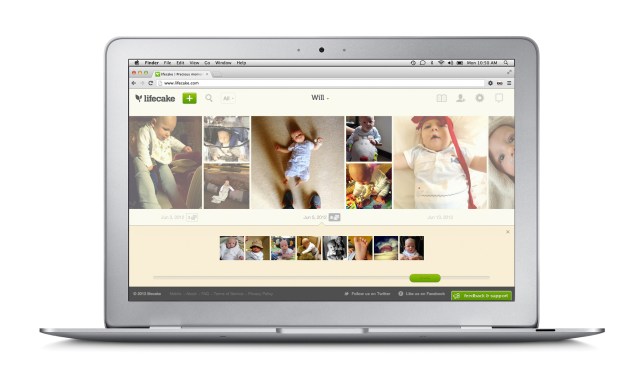 Lifecake generates revenue in a couple of ways. Photos and videos are uploaded in their full resolution, and the service offers 1 GB of free storage to get users started, then provides a premium tier with 100 GB for customers who pay a $36 annual fee. That’s considerably cheaper than Dropbox, which charges $120 (or $99, if paying by the year) for the same amount of storage.

Babaian explains that the company is able to do this because it also has another business model in play as well: photo books. Customers can order premium, hardcover books with 80 pages – one photo per page –  for $50 apiece. (Additional pages are $0.50 each.) The company also makes the process of building the books easier by automatically laying out photos, based on orientation and image quality, while users can edit things like the background colors, captions and more.

Lifecake’s apps are well-designed, with clever little touches, like a “shake” feature which pulls up the ten most popular photos in a slideshow mode for easy access, for instance. You can download the apps that work on your device of choice from here.

Update: the round is a seed round, not a Series A. The post has been corrected.