Acquirers and investors fear (missing out on) what they don’t understand. That’s one reason Snapchat might not be revealing its user count. But everyone wants to know. The problem is that ephemeral messaging isn’t like posting to Facebook or texting. It’s a new medium with a unique behavior pattern, so you can’t estimate Snapchat’s size by comparing it to anything else.

But you don’t have to. With some science and anecdotal reports of how many snaps people send a day, you can get a range that illuminates how many daily users Snapchat might have.

[Update: Earlier today BuzzFeed’s John Herrman wrote a smart piece questioning how little we know about Snapchat’s metrics. However, it used stats about WhatsApp and text usage to estimate Snapchat’s user count. We don’t see as accurate since Snapchat’s ephemeral messaging is so different and takes much longer than texting or instant messaging, so we wrote this breakdown using no comparisons to other communication mediums.]

We start with two ‘facts’ directly from Snapchat team:

To calculate user count, we have to make a few assumptions that we can’t verify as accurate, which we’ll mark with a *. We’ll then note that all our final user counts are based on these assumptions by marking them **. Seriously, these are clever but speculated projections that aren’t necessarily right.

Let’s make our first assumption that the average snap that is sent to more than one person is sent to four people*, based on our anecdotal usage. If 12% of snaps are sent to more than one person, and each is sent to an average of four people, 35.3% of received snaps each day are multi-user-received snaps. [Correction: we originally had 48% instead of 35.3% here, so we’ve corrected it and all the subsequent numbers.]

We can get the number of snaps sent to multiple users simply by dividing the total received count for that type of snap (141 million) by the average number of recipients (4), yielding 35.25 million sent multi-user-received snaps.

Using that figure, we can derive estimated daily active user (DAU) counts for Snapchat by laying out different ranges of user activity. In short, on a day that a user is logged in, how many snaps do they send? Using the above daily sent snap count, we can derive the following ranges. 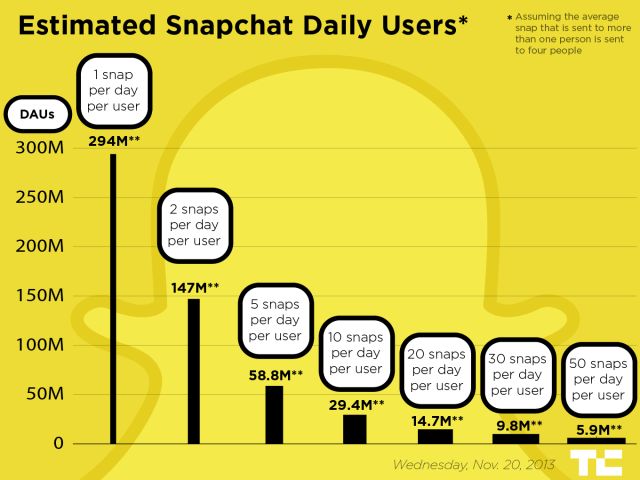 Snapchat’s user base is surely distributed across this range (with some crazy snap-happy outliers), but using these averages gives us a range of estimated user counts.

A caveat. It is very unlikely that the average Snapchat DAU sends one snap per day, or 20 snaps per day. Those numbers are included for reference, and are not endorsed by TechCrunch as probable.

Why The Hell Does This Matter?

Snapchat won’t share its user count. Why not? Reasons. Many of them.

It could want to maintain an air of mystery as it courts acquisition offers in the billions of dollars. It could hope to avoid direct comparisons to longer-standing social networks like Instagram or more traditional messaging apps like WeChat that may have higher user counts. Internally, it may focus on engagement — getting people deeply addicted/in love with Snapchat rather than courting a larger, less passionate user base.

Or it might think press and people are dumb enough to directly compare its 400 million snaps privately sent per day to Facebook’s 350 million photos uploaded and usually shared widely/publicly. “Wow, Snapchat is bigger than Facebook!” No, though I’m sure Snapchat has successfully  confused some people. 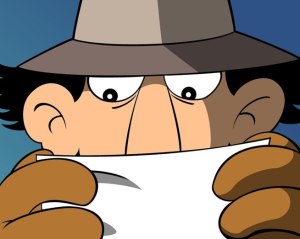 But why does knowing Snapchat’s user count matter? Because it explains whether ephemeral messaging is a niche activity frequently done by a small audience — or — a widespread phenomenon a large audience is dabbling in.

If a few million people love it, the question will be whether Snapchat is appealing beyond hyper-chatty mobile-first young people, and can gain exposure to more people. It would mean with the right distribution, it could grow very large, as each additional user brings a ton of engagement. This might mean Snapchat would benefit a lot from being acquired by a massive service like Google or Facebook that could promote it.

If many millions kind of enjoy it, the question is whether the world is still getting used to disappearing communication. If it’s a medium humans naturally take to, Snapchat might not require much help, but would just need to bide its time and let people grow into self-destruct sharing. This could support an argument for Snapchat to stay independent.

But whether 147 million** people send 2 snaps per day or 9.8 million** people send 30 snaps per day, we know Snapchat is pretty damn popular. And as much as some want to write it off as a fad, ephemeral messaging translates a core aspect of offline human interaction into the online world. The silly jokes, funny faces, and intimate encounters you share with the people you love disappear when the moment ends. It’d make sense that we’d want the same freedom from the permanent record when communicating digitally.

**Estimate based on assumption