We’ve previously described GrabCAD as a ‘GitHub for mechanical engineers‘. It offers an online community and marketplace for CAD engineers, along with collaborative tools to share designs and 3D models as ‘work in progress’ with engineers, clients, customers and other stakeholders in the design process.

Today, the Boston-headquartered startup (which also has a development office in Estonia and an R&D outpost in Cambridge, UK) is pushing out a significant update to its Workbench product, adding a raft of new features that it says now makes it a complete platform for what it calls Collaborative Product Development (CPD) and the ideal tool to help hardware startups and other small to medium-sized hardware companies. In other words, GrabCAD is keenly positioning itself to ride the hardware renaissance.

We see the new type of hardware companies coming out and building products two-to-three times faster.

“Hardware is definitely changing and the Internet is the key driver for this,” says CEO and co-founder Hardi Meybaum. “For most hardware companies it still takes at least 5 years from the idea to actual product on the store shelf. At the same time you can build a software company in months and start making money. But we see the new type of hardware companies coming out and building products two-to-three times faster.”

It’s these new types of faster-to-market hardware companies that the newly updated Workbench appears to be targeting. Features being introduced or enhanced include a desktop client with Dropbox-esque file-sharing capabilities but tailored for CAD files, a redesigned Version control specially built for CAD (powered by Git on the backend), and a web-based 3D Viewer that supports all native CAD formats with the ability to see changes in the 3D file, interrogate them, and comment on those changes.

In addition, “partner spaces” let engineers invite manufacturers or customers to their projects and share updates, all in one place. 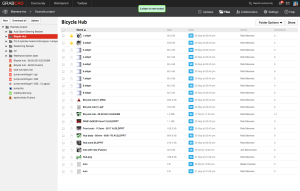 Specifically, Meybaum cites two typical examples of the types of customer that have been using Workbench since its original launch. First, he says, are small teams who are distributed, whereby the engineering teams or the manufacturing teams are based in different locations.

“I just met a company who have a product design office in SF, mechanical and electrical engineering in Boston, and they manufacture everything in China. Designers create sketches or pretty pictures, engineers turn them into CAD files that can be manufactured, factories will create tooling to manufacture this type of product. All these people need to be up to date every hour and you just can’t make it work with the desktop tools where you need months of setup time and training”.

We listened and now we believe we have a tool that is aimed at small hardware teams.

The second (and, perhaps, more interesting) group are Internet of Things (IoT) startups. “The products these guys are building have software plus hardware components and they are already using modern software for some parts of their business,” says Meybaum.

“For example they are using Git for software engineering and were looking for the same type of tool for their CAD data management. But there were nothing like that out there (most tools in the CAD industry have been built 20 years ago) and the first release of GrabCAD Workbench wasn’t really aimed for this type of work. We listened and now we believe we have a tool that is aimed at small hardware teams who want to build their products faster.”

The first revolves around the ability to validate an MVP, secure funding and the changing retail model enabled by crowdfunding platforms like Kickstarter, IndieGoGo, or hardware incubator-type companies like Dragon Innovation, and Quirky.

“You can make a Virtual Prototype with CAD software or 3D print a prototype and start selling before you spend time and money in large scale manufacturing,” he says.

Late last year the company raised an $8.15 million series B round led by Charles River Ventures, with participation from new investor David Sacks (co-founder of Yammer and former chief operating officer of PayPal), and existing investors Atlas Venture, NextView Ventures, and Matrix Partners. This brought total funding to around $14 million, having previously disclosed a $1.1m seed round, followed by a $4m Series A.

It should be noted, however, that GrabCAD isn’t the only company putting tools for CAD in the cloud. Competitors include U.S.-based Sunglass, and Finland’s MyCadbox.