Carousell, a Singapore-based consumer-to-consumer marketplace app for iOS and Android, has raised a $1 million SGD (about $800,000 USD) seed round led by Rakuten. Other investors include Golden Gate Ventures, 500 Startups, Danny Oei Wirianto and Darius Cheung. The startup will use its funding to expand into Indonesia and Malaysia before tackling other Southeast Asian markets.

The startup’s founding team, Quek Siu Rui, Marcus Tan Yi Wei and Lucas Ngoo, demoed the first version of the app at Startup Weekend Singapore in March 2012 and began working on it full-time two months later. Rui says the trio wanted to create a marketplace app because they found using classified listing sites and online forums to sell secondhand books, clothing and other small items tedious and time-consuming. Carousell is very easy to use: listings can be made by taking a photo and writing a brief description of the item, and buyers can browse listings based on their location.

Southeast Asia’s mobile penetration rates are already high and still rapidly growing. Carousell hopes to fuel its growth by giving smartphone users an easy and social alternative to online classified listings. The startup’s founding team spent a year working on the app. Carousell’s features include photo filters, Facebook and Twitter integration and mobile-optimized Web pages that are automatically created for each listing.

“We were inspired by Instagram’s ease of use,” says Riu. “It also has the scale that we aspire to.” 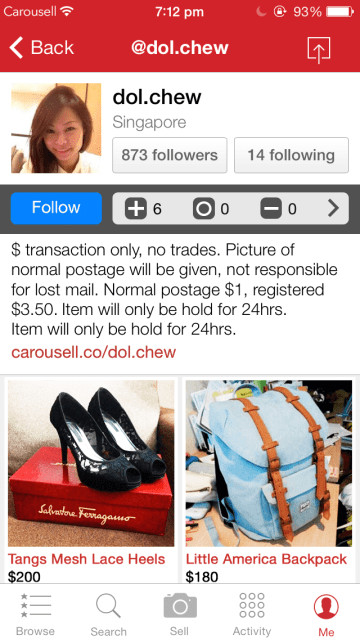 Carousell’s target users are women between 16 to 34. The startup has not disclosed the size of its user base, but says that its community has already created a million listings, 20% of which get purchased. Most listings are fashion and beauty products, secondhand tech gadgets, and handcrafted items. Riu says the app gained traction by marketing on university campuses, placing magazine advertisements and looking for potential sellers in flea markets and online forums. So far, Carousell’s early adopters are highly engaged. The startup claims that its users open the app about 10 times each day on average, spending a total of 24 minutes on it.

Though Riu says that his company’s relationship with new investor Rakuten is “not a strategic one,” Carousell fits into the Japanese e-commerce’s strategy of growing its global footprint by investing in or acquiring Southeast Asian tech startups. In September, Rakuten spent a reported $200 million to buy Viki, a global video streaming platform that crowdsources translated subtitles. Like Carousell, Viki is also based in Singapore. Earlier this year, Rakuten also set up a $10 million fund to invest in startups primarily from Taiwan, Thailand, Indonesia and Malaysia.

“There is an entire generation of Internet users that will leapfrog the desktop computer and come online through the smartphone. The first apps they are going to use are the likes of Facebook, Twitter and Instagram. If they wanted to buy or sell something online, they are going to expect an experience that is equally simple, intuitive and fun to use. Carousell is in the best position to ﬁll that need,” said Sae Min Ahn, managing partner of Rakuten’s investment arm, in a statement.