Founded by former Sony, Olympus and Toyota engineers, TechCrunch Tokyo 2012 grand prize winning hardware startup Whill not only wants to redesign the wheelchair, but also combat stigma by creating sleek and modern mobility devices. The company’s first retail model, the Whill Type-A, is now available for pre-orders and will be ready for delivery within the U.S. early next year.

Whill is currently part of 500 Startup‘s accelerator program and has raised a total of $1.7 million so far. Other investors include Itochu Technology Ventures, Facebook Japan engineer Eric Kwan, SunBridge Global Ventures and Wingle Co., and is currently closing its seed round.

The company entered TechCrunch Tokyo last year with a prototype of an electric add-on that allowed wheelchair users to go longer distances. After exhibiting at the Tokyo Motor Show and conducting market research in the U.S., Japan and the UK, however, Whill decided to develop a complete device with a four-wheel drive.

First the team interviewed 150 wheelchair users from the U.S., where they’d received the most demand for an alternative based on their research. Whill found that people wanted devices that were both nimble and stable. Most importantly of all, however, people sought something that would help remove the negative connotations attached to wheelchairs.

“Imagine a car, bicycle, scooter or skateboard, all devices that basically make you feel happy,” says Atsushi Mizushima, Whill’s director of business development. “Only the wheelchair, as a mobility device, makes people feel uncomfortable. People’s perception of those devices are that they are limiting.” 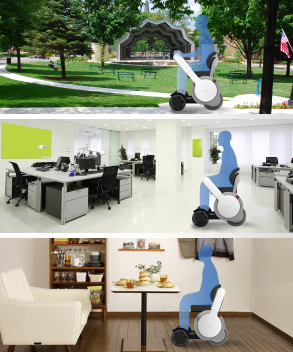 Whill’s devices are designed to look modern (CEO Satoshi Sugie was formerly a product designer at Nissan). One of the biggest differences between the functionality of the Type-A and traditional wheelchairs are front-arm controllers that let users navigate by leaning forward, echoing the posture of bicycle and motorcycle riders.

“In addition to the aesthetics, what we try to achieve is the feeling of driving a car, motorcycle or skateboard,” says Mizushima. “They can choose to take the lean-in position, which makes them look more active and lets them feel like they are riding a motorcycle or other cool mobility device instead of forcing them to take a passive sitting posture.”

Whill’s controller can be operated with a single hand, like a joystick. Two other modes lets users sit close to tables or lean back and relax when they are stationary.

The other major improvement Whill makes to traditional wheelchairs is a better balance between turning radius and terrain coverage. In order to make small turns, wheelchairs need to have small front wheels–but those tend to get stuck on cracks or when rolling over rough surfaces like gravel.

Whill’s team developed a unique all-around wheel with rollers that can move freely back and forth, as well as transversely. This enables the Type-A to have a turning radius of 28 inches and gives it the stability to navigate rough terrain and clear bumps as high as three-inches. 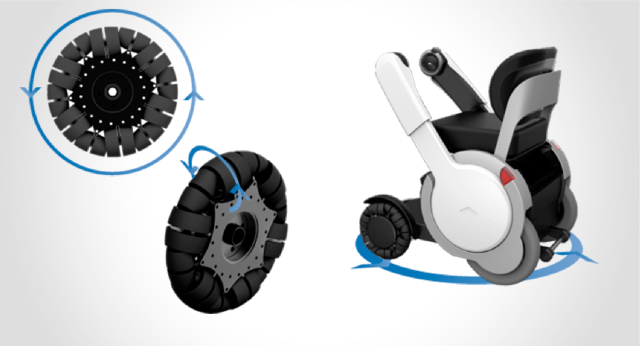 The Type-A’s price is yet to be determined, but Mizushima says the first batch will include premium features as an incentivefor early adopters. While Type-A is considered non-medical device (which means it is not FDA-approved), Whill plans to have their future products approved as medical devices by the U.S. Food and Drug Administration so that some will be eligible for insurance coverage,

To scale up manufacturing, the company is currently talking with original equipment manufacturers in Taiwan and Mexico. Future models will include software integration, such as apps, data analysis and alerts that warn users about dwindling battery supplies and obstacles in their path.

Mizushima says the company wants to “create the iPhone of mobility devices” since the Type-A goes everywhere its user does, like a smartphone. He adds that Whill hopes its mobility devices will eventually be seen as not just as an alternative to traditional wheelchairs, but as an energy-efficient car replacement that, like the Segway, can go where other vehicles can’t.

Whill’s main objective, however, will continue to be improving the lives of disabled people. The company’s team members have known each other for more than 10 years (except for Mizushima, who joined at the beginning of this year) and collaborated on mechanical projects for fun. They began developing a wheelchair alternative after hearing about a friend’s experience with stigma.

“He said he didn’t go outside for groceries even though the market was only two blocks away unless it was absolutely necessary because he didn’t wanted to be seen negatively as a wheelchair user. There were a lot of obstacles for him to get around,” says Mizushima.

“Two blocks is not a big deal for us, but it was a big deal for him. Hearing that was a shocking moment for us and the beginning of a journey. It’s why we started to create devices to solve problems for wheelchair users.”

To test drive Whill, visit the company’s site. The Type-A will be exhibited at Abilities Expo San Jose later this month, as well as CES and Abilities Expo LA early next year.