Remember Unbaby.me? The browser extension that promised to end the endless torrent of baby photos uploaded to Facebook by your proud procreating pals, replacing those posts with pictures of dogs, or cats, or whatever?

Take that concept. Expand its focus, from “babies” to “anything you’re tired of hearing about”. That’s the idea behind Rather.

Like Unbaby.me, Rather scans Facebook and Twitter for mentions of things you don’t care to hear about, and replaces it with something else of your choosing. Tired of hearing about Kanye’s latest antics? Set up a filter for “kanye, kanye west, yeezus, yeezy, louis vuitton don” etc. and set them to be replaced with pictures of, say, baby pandas. Next time your friend tweets about yeezy, you’ll get pandas instead. If you’re curious as to what lays behind the self-imposed censor panda, an “undo” button above the image returns the tweet to its original form. (You can also swap out any tweets that link to websites you don’t like, if you want to get fancy with the filters.)

Now, before anyone declares this thing a ripoff of the aforementioned Unbaby.me concept: it’s actually built by the same folks. After Unbaby.me proved to be a bit of a viral smash, co-creator Chris Baker left his gig as Creative Director at Buzzfeed, and he and his two co-founders, Pete Marquis and Yvonne Cheng, expanded the concept beyond blockin’ all things baby. 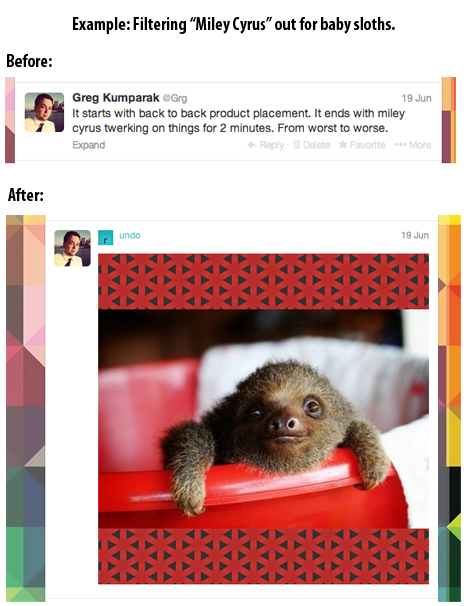 Alas, there’s a challenge or two inherent to the concept, and neither of them are very easy to overcome:

Alternatively, you can mute posts, hiding them outright instead of replacing them with images. That’s probably a better option, really; if the people you follow are posting about things that annoy you so often that you’ll go out of your way to filter it, a page full of pandas (or whatever) will probably be just as annoying as the alternative you’re avoiding, if not more.

You can find Rather for Chrome right over here.