This is a pretty cool new iOS app from Russia’s Displair, maker of the Minority Report-styled Multi-Touch “air” display.

Similar to Google-acquired Bump, Airlike uses an iPhone’s various sensors in combination with its own cloud-powered algorithms to let you share photos, videos and contacts with other iPhone users in close proximity, but with one key difference: There’s no need to bump phones or fists. Instead, you flick content through the “air” from one phone to another.

Shunning Bluetooth or WiFi for peer-to-peer networking, the app uses a combination of GPS, and each phone’s gyroscope, compass and accelerometer sensors, and relays that information to its own servers to know when two phones are pointing at each other. You then each confirm a connection and can begin flicking content from phone-to-phone — an experience the company describes in Arthur C. Clarke fashion as “absolutely magic”.

And in our quick testing, the iPhone app works as advertised. 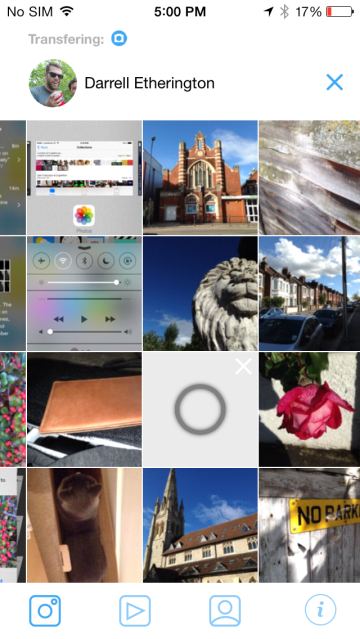 Along with trumping Bump’s need for physical contact, Displair is also talking up Airlike’s functionality over Apple’s own AirDrop phone-to-phone filesharing offering. That’s because AirDrop requires iOS7, whilst Airlike works on iOS 6 and upwards, meaning that it supports a greater number of Apple’s older devices.

In addition, and crucially longterm, Displair plans to release Android and Windows Phone versions of the app, making Airlike, just like Bump before it, truly cross-platform.

One thing lacking for now, however, is an Airlike API that other developers can tap into, though I’m told that this is on the roadmap and could be one way the company hopes to monetize the technology.

Interestingly, the ability to transfer money between contacts peer-to-peer is also currently in development, thus taking another page from the Bump playbook.

Meanwhile, the longer term business model revolves around the way Airlike will tie into the Russian startup’s Displair Digital Signage product to enables users to grab content from advertising displays. So, for example, you could walk into a mall, see interesting ad-related content on Displair (or even a standard LCD screen) and have it sent to your smartphone using a simple gesture, much in the same way as the Airlike app works for phone-to-phone content sharing.