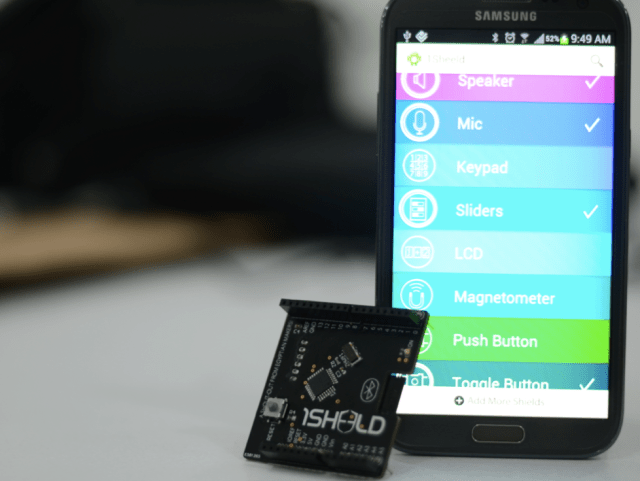 I loves me some Arduino. The only thing I don’t love — and I’m sure many of my fellow Arduino tinkerers would agree with me here — is buying or building a new shield (read: add-on board) every time I need to some functionality that the board doesn’t support out of the box (like internet connectivity, microphone input, or audio playback.)

1sheeld lets your smartphone act as many different shields. It’s the first product built by Integreight, an eight man team out of Cairo, Egypt.

Integreight was voted as the audience choice at Disrupt Europe this evening, plucking them from the dozens of startups exhibiting just outside of the main theater and dropping them right into the flurry that is the Disrupt Battlefield.

Your smartphone is packed with tons of sensors — many of them the same types of sensors that you might want to strap on to an Arduino by way of a shield. It’s got Bluetooth. It’s got WiFi. It’s got gyroscopes, and accelerometers, and a touchscreen that can emulate all sorts of keypads and display types. Why not let your smartphone share those capabilities with your Arduino, effectively allowing it to provide the prototyping functionality of dozens of different shields? That’s the idea behind 1sheeld.

With 1sheeld, you strap just one shield (hence the name) to your Arduino board. That shield acts as a wireless middle-man, piping data between your Arduino and your handset. On your phone, you’ve got an app running that can quickly switch 1sheeld’s behavior from shield to shield. 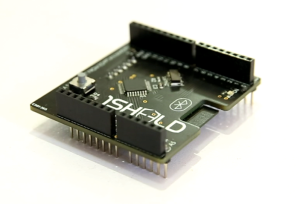 Want to test audio playback, but don’t want to order, wait for, and eventually build an audio shield? 1sheeld lets you pipe audio through your phone’s speaker. Want to integrate internet functionality? It can pull data from your phone’s built-in wireless receivers. Want microphone input? It’ll do it. Magnetometer and gyroscope data? Yep. Hell, it’ll act as an two-color LCD display if you don’t feel like bustin’ out the ol’ breadboard.

The idea isn’t to kill shields, of course — once you get past the early prototyping stages of an Arduino project, you’d probably want to swap in a proper, dedicated shield to do whatever you’re using your smartphone for.

Plus, there are some shields that your phone just couldn’t replace. For example, there’s no straightforward way for your phone to act as a motor shield (for, say, powering the motors of an RC car); for those cases, 1sheeld is hoping community input will tell them what functionality their base board needs. With that said, like any good Arduino shield, 1sheeld is stackable — if there’s something it just can’t do, you can always toss another shield on top.

Integreight is also working on a product they call the “Smart Breadbroad”, which allows you to hook components up to a breadboard and connect them without wires. The user draws the breadboard schematic on their computer, uploads it to the Smart Breadboard, and all the circuits are automatically configured within the breadboard itself.

Integreight plans to launch a Kickstarter campaign for the 1sheeld some time in November. Through the Kickstarter, the 1sheeld will cost just $20; after the campaign, they’re aiming to sell it for around $40 — which, really, seems incredibly cheap to me. If you’re interested in following their progress, they’ve got a sign-up page right over here.

How much will it cost?

What relationship do you have with Arduino?

We’re talking to them, but we have no contract with them. In the opensource world, you don’t really need that.

Are you compatible with the Raspberry Pi?

With an adapter, yes. 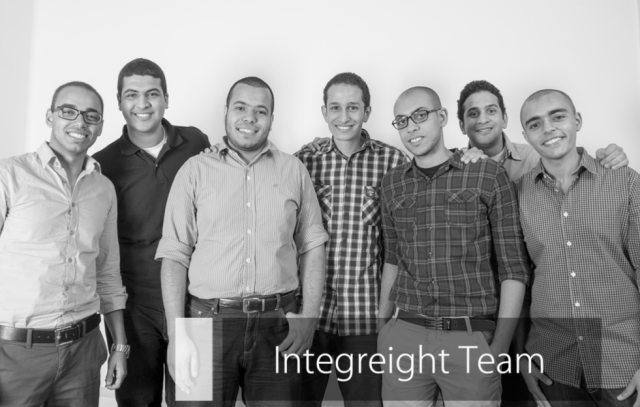