Part of the reason that higher education exists, besides accumulating habits, diets and debts that will haunt you for years to come, is to prepare you for the “real world” — and for the workforce. Of course, with graduation rates around 60 percent and rampant undermployment among recent grads casting a long shadow over college campuses, it’s clear that something is wrong.

The workforce and job market are undergoing significant changes, and there is a pervading sense, whether misguided or not, that college isn’t preparing students for this Brave New Working World. With the Obama Administration considering a plan that would (among other things) tie federal assistance for higher ed institutions to graduates’ outcomes in the job market, it’s clear that many believe that higher education needs to shift to a more open and career-focused model — one that prioritizes career readiness.

While reform is desperately needed, Aaron Michel believes that this shift in priorities comes with a caveat. As the system becomes increasingly focused on the “back-end” of the career search process (helping find you a job), he tells us, it tends to overshadow the “front-end” — or finding the right industry and function for your passion. While finding a job means the ability to put food on the table, the cost of ending up in the wrong job or field can be devastating. Over the long term, it’s a net loss.

Of course, navigating the “front-end” of the career search and finding the “right” job isn’t easy; it takes time. Plus, to have any real shot at success, students need to start the process early. In 2009, Michel and fellow education entrepreneur Alex Li founded PathSource as a way to help students navigate the overwhelming array of career options and reduce a “front-end” search process that usually takes years to something more manageable.

Combining the good will of the public with technology, Pathsource aims to give students direct access to first-hand information about professional opportunities that are available to them based on their skills, interests and background. To do this, the Burlingame-headquartered startup built its career-readiness solutions on top of a data analytics layer, which uses student demographic data to power its recommendation engine.

Similar to how Amazon combines one’s browsing history and interests with purchases made by people who have similar taste profiles to improve the recommendations it makes for say, books, PathSource makes career recommendations for students based on the paths chosen by like-minded people. To enhance its recommendations, the engine incorporates the student’s location, gender, ethnicity, career assessment results and a handful of other signals, while taking into account the industries that are most prominent in the student’s region and which jobs are actually available.

But to separate PathSource from existing services, once its data layer was in place, the team also wanted to address the other half of the career funnel: What to do once they decide which path they want to pursue. Knowing that the questions of how to get hired and how to hold a job or internship once they choose a direction can be just as frustrating, the founders decided to build out a video library, career database and curricular tools that could help them frame and answer these questions.

The library and database also act as an additional source of data that can be used to feed its career engine and help improve recommendations, like pointing students towards educational tracks, majors and programs that can help them move towards their ideal jobs. 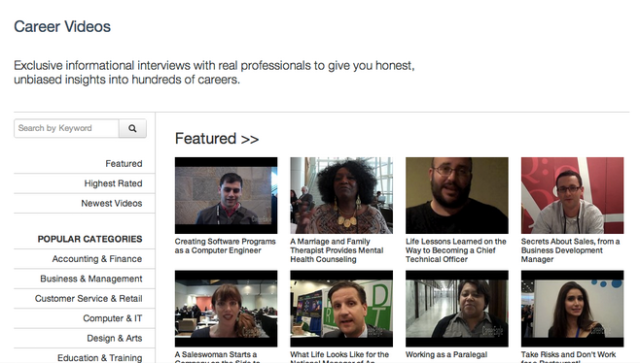 The co-founders tell us that PathSource’s video library is now composed of over 1,100 videos, which are made by two Emmy-winning producers and shot in high-definition — so that teachers can project the videos on a large screen in class and students can actually see them. Each video is three minutes long, and contains a short informational interview and is available on the Web so that they can be accessed via desktop, tablet or smartphone.

Altogether, the library is divided into “16 federally-designed career clusters,” the CEO says, as well as 58 “career pathways” or sub-topics, which align with the system of categorization most schools use in their career technical education classes (CTEs).

Career paths are broken down into multiple videos so that students interested in a particular area, like, say teaching, can watch 20-plus videos of teachers talking about their jobs and what they do on a daily basis. The idea is to give students a more accurate picture and understanding of what their experience of being a real, live, human teacher would be like were they to pursue this path.

Students can then add to a crowdsourced rating of each video based on how helpful or informative they found it, which helps PathSource curate the library and helps students identify content that other students have found helpful. The co-founders also built the platform with diversity in mind, the goal being to bring technology and resources to K-12 schools that lack them, rather than gearing product development towards wealthy private schools, as many others do. The library’s videos, for example, are available in dozens of languages, the CEO says, and all come with subtitles and transcripts.

The third arm of PathSource’s platform is its database, which aims to act as a repository for additional information about each particular job. This includes key statistics about these positions, a written description, educational paths that lead there, related majors, related careers, information about the interviewee and so on.

To help users get started down the right track with its video library and database, PathSource requires students to fill out a 5-minute interest inventory and career assessment, which evaluates their career interests and perceived aptitudes for a range of subjects.

“The assessment really intends to serve as a jumping off point,” Michel explains, “and get students exploring and discovering jobs that they might not have discovered or even knew existed.”

In terms of use cases for its library and database, the CEO tells us that the platform has been designed to be used to inform curriculum, school or district policy. In other words, teachers can use it for reporting, showing the videos in class and then assign one or more assessments to be completed in class or for homework. PathSource can then turn the results of those assessments into a report which they can view or send to the school’s admins or to the district.

On the other hand, teachers can also use the videos as “bell ringers,” Michel says, to help students connect what they’re learning with real world applications, allowing a biology teacher to show a video of a marine biologist talking about her experience of an oil spill and its effects on tidal zones while students are studying “Human Impacts On The Ocean,” for example.

Lastly, the videos can be used by guidance counselors to help students think through their career options and actually envision what working as a professional in that field would be like. Personally, I remember my experience with the school-appointed guidance counselor being slightly to moderately frustrating. It consisted mostly of reminding them who I was and that my name was not in fact “Trip.” I’m also willing to go out on a limb and say that I’m not alone.

Luckily for the overwhelmed and over-worked guidance counselors of the American education system, PathSource offers an assist by allowing teachers to refer students to its video library to watch videos featuring people from a range of professions. If they’re having trouble finding an area to focus their studies, this can help them narrow the range; or if they’re having trouble selecting a college, reducing possible career choices to a manageable number can help the guidance counselor better target their feedback and suggestions.

Then, once students discover what they want to do using the video library and career database, PathSource funnels them second funnel mentioned above — in other words, figuring out how to proceed after they identify their ideal career path. PathSource’s curricular tools provide students with an online, modular curriculum for modern jobs and job skills. According the founders, the modules focus on both modern skills and soft skills, like networking, team-working and entrepreneurship, for example, so that they can learn the basics skills they need to find an internship or a job, and keep it.

The modules are also Common Core-aligned, interactive and include writing assignments, team-based activities and presentations and are designed to be flexible and customizable, so that teachers can assemble the modules into a semester-long curriculum or whatever they want.

Today, the founders believe that they’re finally starting to get close to the kind of end-to-end platform that they envisioned when they set out. Over the last three years or so, PathSource has been flying under the radar trying to get the right pieces in place before ramping up sales. And, since its now largely competing with established, big-budged educational IT companies, it’s worth taking the time. 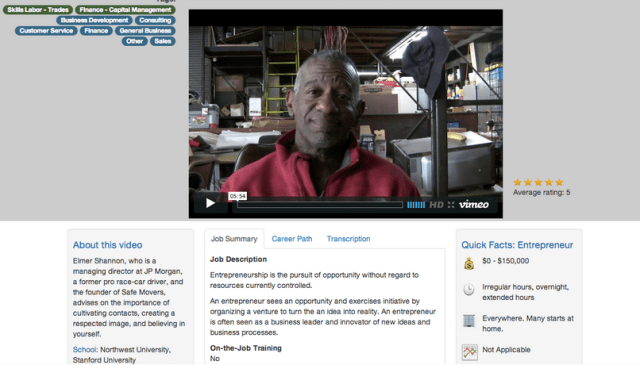 As of now, PathSource is working with 10 K-12 customers, which include San Francisco Public Schools and Alameda County, Youngstown City School District in Ohio, Brooklyn Bridge Academy in New York, Henderson County Schools in Kentucky and Chicago Public Schools (which includes the third largest school district in the country), among a few others.

With its tools in place, and the amount of inbound interest among districts beginning to increase, the CEO tells us, PathSource recently took on its first outside capital, closing a $500K-plus round of seed capital. The contributing investors include Ironfire Capital, Chris Yeh and Wasabi Ventures, Yat Sen Foundation, the Innovation Foundation, Pierre Leroy (who also sits on the board of Capital One) and Boston education accelerator LearnLaunch co-founder, Eileen Rudden, among others.

The new capital in tow, PathSource is looking to expand its team and, in particular, to begin building a more robust sales staff to help raise awareness among K-12 districts and administrators. To do that, the startup has stolen Christine Higgins, Houghton-Mifflin’s VP of Sales, who will be joining the startup as its first Chief Sales Officer.

Looking ahead, the PathSource co-founders see plenty of opportunity in a career navigation and services market that really hasn’t changed much over the last few decades. It’s part of what has led to the disappointing engagement, graduation rates, outcomes and debt default rates that have a chokehold on the American educational system.

The government and the system itself has begun to recognize the extent of the problem and has begun to fund a solution (or the former has, at least). According to Michel, the market that PathSource is looking to tap into is upwards of $5 billion, based on annual recurring recurring funds from sources like the Perkins Act and English Language Learning funding, among others.

The founders also believe that, down the road, the company’s video library, career database and analytics engine can be applied in B2C verticals and a handful of other industry niches as well. How much carryover value it can have remains to be seen, but for now, the startup is showing signs that it has started to crack the K-12 nut, which, thanks to its long sales cycles, archaic infrastructure and shallow pockets, is a (capital-intensive) market that has played grim reaper to many a plucky startup. But maybe PathSource is starting to find the answer. After all, it’s made it this far and without an Edmodo-sized bank account, to boot.