One in 10 Americans have used a dating site or app, including 38% of people who currently describe themselves as “single and looking,” according to Pew Research Center’s first survey on online dating since 2005.

Pew found that over the last eight years, the number of people who went on a date with someone they met online grew to 66%, a significant increase from 43% in 2005. More than half (59%) of Pew’s respondents said they now agree with the statement that “online dating is a good way to meet people,” compared to 44% in 2005. Though 21% of respondents said they think people who use online dating sites are “desperate,” that’s a decrease from the 29% who agreed with the statement eight years ago.

Some of the naysayers, however, are the same people logged onto online sites and apps. About one in 10 of online daters said they think dating site users are “desperate” (though the survey didn’t indicate if they were referring to themselves or just their lackluster prospects on those sites). 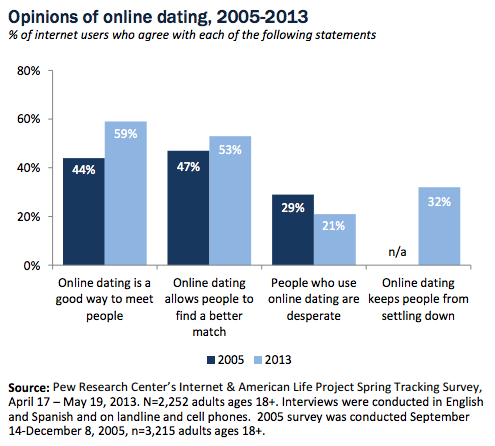 The majority of online daters, however, were much more upbeat. 79% said they felt dating sites and apps are a good way to meet people and their positive attitudes are probably reinforced by seeing success stories. 29% of Pew’s respondents said they know someone who used sites or apps to find a spouse or other long-term relationship, up from just 15% in 2005.

Many online daters prefer to use niche dating sites, with 40% reporting that they use sites or apps designed to connect people with shared interests or backgrounds.

Of course, Internet romance doesn’t just take place on dating sites or apps. 15% of people on a social networking platform (such as Twitter or Facebook) who had dated within the last 10 years said they had asked someone out using the site.

But the growing popularity and acceptance of online dating over the last eight years doesn’t mean that the odds of finding romance have increased dramatically. Though 23% of the people surveyed said they found a spouse or long-term partner online, Pew says that percentage is “statistically similar” to the 17% of online daters who reported success back in 2005.

There are more options now than there were eight years ago, but online dating is still fraught with many of the same difficulties. 54% of online daters said they felt someone had “seriously misrepresented themselves in their profile.” More alarmingly, 28% of online daters said they had been contacted by someone through a dating site or app in a way that made them feel harassed or uncomfortable. Women were much more likely than men to have these experiences, 42% compared to 17%. 27% of all social networking site users said they had unfriended or blocked someone who was flirting in a way that made them feel uncomfortable.

Not surprisingly, many people use the Internet to perform due diligence on romantic prospects. 29% of Internet users who have what Pew dubs “recent dating experience” (i.e. people who are currently single and looking or have been in their current relationship for less than 10 years) have looked for information about someone they were currently dating or about to meet for a first date. That is more than double the 13% of people who said they researched their dates online back in 2005.

Once people do find someone they click with, they are eager to share the good news with everyone they know. 17% of respondents said they had posted details from a date, but 18 to 29 year olds are especially keen to broadcast their romances online–31% had shared photos and details of their dates online. Once those relationships went south, 48% of people in that age range also used social networking sites to look up their exes. 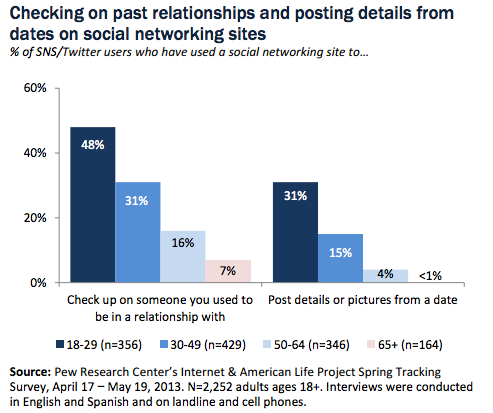 While younger people are more likely to use the Internet to keep tabs on former flames, 24% of all Internet users have searched for information about someone they dated in the past, up 11% in 2005. This includes 21% of Internet users aged 45 to 54 and 15% aged 55 to 64. Despite the extra stalking opportunities presented by having access to your ex’s profile, 22% of respondents said they eventually unfriended or blocked someone they were once in a relationship with.

Though meeting romantic partners over the Internet is becoming increasingly mainstream, the vast majority of people who are married or in a long-term relationship met their partners offline. Only 5% of Pew’s respondents said they met their partner online.

The study also found, however, that many people don’t believe that the goal of Internet dating is to find a long-term partner. 32% of people agreed that “online dating keeps people from settling down because they always have options for people to date,” but Pew’s survey didn’t indicate if they thought that was a good or bad thing. Based on the high profile of hookup apps like Down (formerly Bang With Friends), Tinder and Grindr, however, many online daters may prefer “happily for the next few hours” to “happily ever after.”