Word-prediction Android keyboard maker SwiftKey, which closed a $17.5 million Series B led by Index Ventures last month and whose keyboard software runs on millions of mobile devices, has launched a new version, SwiftKey 4.3, that let’s users customise the size and position of the on-screen keyboard — with the idea being to ensure a more comfortable typing position, regardless of device size and typing posture preference.

SwiftKey 4.3 (available to download as a public beta) also merges SwiftKey’s tablet and phone apps into a single version (although people who previously bought the tablet version will continue to be supported).

Why the single app going forward? As phones have got bigger and tablets smaller, keyboard layout requirements aren’t so clear-cut between the two device types — so it no longer makes sense to silo the software in separate versions, SwiftKey tells TechCrunch.

The launch of SwiftKey Cloud in v4.2 underpins that version convergence, allowing the user’s language profile to follow them across different devices.

On the custom keyboard layout front, the diversity of the Android ecosystem — where SwiftKey (predominantly) plays — means Droid-flavoured devices come in all shapes and sizes, from phones to phablets to mini and maxi tablets, so it makes sense for SwiftKey to adapt its keyboard to successfully mesh with more devices.

Of course, offering more layout customisation also effectively removes the need for a separate app for phones and one for tablets. “If you can customise it so the  keyboard can live anywhere you want, then there isn’t a need to distinguish between the phone and the tablet,” says SwiftKey co-founder and CTO, Dr Ben Medlock.

In SwiftKey v4.3, the keyboard can now be undocked from the bottom of the screen and moved to another position, such as the middle — likely a more comfortable typing position on a tablet being as people tend to hold a slate about half way up to keep it balanced, argues Medlock.

SwiftKey says its UX team spent a lot of time looking at people’s typing postures to determine what additional keyboard modes to add. Keyboard layouts can be switched by pressing the SwiftKey button at the bottom left of the keyboard to summon the settings menu. 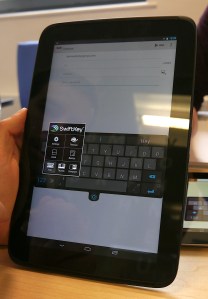 Medlock demoed the various configurations to TechCrunch at the startup’s London HQ, including an undocked layout, as seen on a tablet (left), and an undocked thumb keyboard (below, right), on a phone. Keyboard layouts can still be used in the docked position, if preferred.

One neat feature of the undocked keyboard is an element of transparency while the keyboard is being moved/positioned, to allow the user to quickly check on-screen contents that’s underneath it and/or align it in relation to something on the screen.

While SwiftKey offered a split form factor before, for tablet use, that keyboard remained locked to the base of the device. Now there’s a the fully split form-factor option (below, right) where the two compact halves can be moved to custom but mirrored positions where thumbs can peck at them.

The compact keyboard form can be used for typing with a single thumb on a tablet, or to shrink the keyboard on a phone so that it fits around other on-screen elements (such as side-bars). While the full-width keyboard layout is designed to support a traditional two-handed tying stance on a tablet, making room for left/right cursor keys, and a backspace key above the enter key.

The compact keyboard option also works for people wanting to use SwiftKey’s finger-dragging input method, Flow, on a larger device — such as a tablet — by reducing the distance between keys, thereby making it quicker to spell words. v4.3 also improves the accuracy of word prediction when Flow users miss the space bar, according to Medlock. 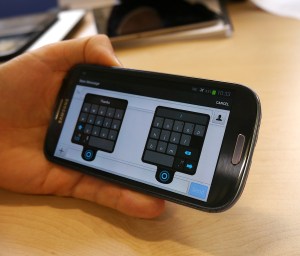 SwiftKey 4.3 launches in beta today, for testing by the startup’s 100,000+ VIP tester community, with a beta period likely to last “weeks”, rather than months.

SwiftKey rival Swype has had different keyboard layouts in its arsenal for a while — including a split keyboard layout for two-handed tablet typing, and a compact keyboard that sits in the corner to allow Swyping with a single digit. But SwiftKey’s custom layouts go further towards liberating the keyboard — by giving users more options for customising the position and layout of the keys.

That said, SwiftKey has not gone as far as some startups in the keyboard space when it comes to breaking down the layout.  For example, Disrupt alum Dryft has built a tablet keyboard where the keys follow the users’ fingers, positioning themselves at the point of typing impact.

Medlock described Dryft’s technology as interesting but reckons it’s a way off being ready for the mass market. “What they’ve done is to use the accelerometer to track keystrokes… When you tap it’s actually not the touchscreen that’s making the keystroke, it’s the accelerometer.

“The problem with that — at the moment — is that it relies on the accelerometer being tuned across all these different devices to work properly. So it won’t work in general at the moment but I do think that that’s the kind of thing that I think — looking a stage beyond what we’ve done now — at some point that will become mass market,” he says. 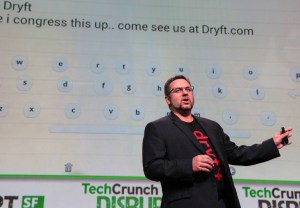 But even Dryft’s innovative typing input method would still need to be underpinned by “a core prediction engine” — which is exactly what SwiftKey provides via the licensing portion of its business. So the rise of more radical input alternatives to its own keyboard software is potentially another supplement to SwiftKey’s licensing business.

In keeping with its own mass market focus — via the consumer-facing SwiftKey Android apps (and now the one unified app) — SwiftKey hasn’t opted to make more disruptive/radical changes to its keyboard. Such as the ability to make all the letters invisible, for instance — as some other keyboard makers have (such as Fleksy and SnapKeys). Medlock argues that the benefit to the user of doing that is too incremental in screen real-estate gains to be worthwhile since it’s also disruptive to the interface, and likely that typing accuracy suffers.

That’s not to say SwiftKey, which was founded way back in 2008, hasn’t experimented with some radical layouts itself over the years. One such “eccentric” layout (Medlock’s own words) from the early years — called TouchType (pictured below, right)  — positioned letters either side of a central word window and did away with the Qwerty layout.  Inevitably it proved too radically different to convince users to take to it. 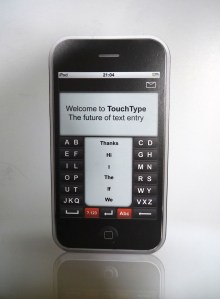 Not the future of SwiftKey

And so — on the surface — the SwiftKey of today retains a familiar Qwerty look. Intentionally so. After all, the keyboard is one of the most used — if not the most used — apps on mobile devices, opened an average of 40 to 50 times per day, according to Medlock, with people spending an average of 45 minutes daily typing away.

In other words: with great usage, comes great responsibility.

“We always have to get back to what’s this like when somebody comes to use it for the first time? Is it intuitive, is it clear what they need to do?” he adds.

What’s next after v4.3? SwiftKey has more developments in the works but is keeping a lid on exactly what’s coming for the moment. One likely area for it to attack is speech-to-text dictation — something Swype has covered via its parent Nuance’s Dragon Dictation technology. Dictation input methods arguably make alternative keyboards more attractive to certain languages that have thousands of characters, such as Chinese.

SwiftKey did say Japanese and Chinese are the two big languages it is working to support. Its full number of supported languages is 72 — across both its own app, and via its licensing business (the app on its own supports more than 60).

“We have at least 12 more languages in the pipeline,” the company adds.

Another area that SwiftKey hasn’t yet tackled but which others in the keyboard space are starting to think about is how to enable typing on very small, wearable devices such as smart watches. Keyboard startup Minnum, which squashes the Qwerty keyboard into a small sausage at the base of the screen, has put a few of its ideas on record — namely that tilting gestures, combined with its squashed keyboard layout, could be used to input text.

SwiftKey isn’t commenting on whether it’s working on anything for the wearable space but it seems likely the company is at least considering how best to address diminutive screens in future, assuming they take off as predicted.

As for its core prediction engine — the special sauce that makes a pretty unremarkable-looking keyboard act remarkable — it’s investing more energy and resources in continuing to develop those algorithms. “We’ve got more people working on it full time than we’ve ever had,” says Medlock.

The company tripled its headcount last year — ramping up from around 35 people to around 120, and now has offices in London, San Francisco and Seoul. This year, fuelled by its Index-led Series B, SwiftKey estimates its word-predicting keyboard technology will land on more than 100 million devices globally. And not one of them an iPhone.