Apple is cutting its orders for the iPhone 5c ahead of the fourth quarter, a new report from the Wall Street Journal claims. Citing people familiar with the situation, the WSJ says that Apple asked its two iPhone assembly partners Pegatron and Hon Hai to reduce the volume of orders for it lower-cost smartphone going into the end of the year, by under 20 percent and around one-third respectively.

The iPhone 5c reduction also comes alongside an iPhone 5s production increase, however, according to two Hon Hai executives speaking to the WSJ. Apple saw much higher than anticipated demand for the new gold-colored version especially, the report says, leading to an uptick in volume output for those devices. Still, the cuts for iPhone 5c orders seem to also include a 50 percent decrease in parts from at least one supplier, indicating Apple is possibly preparing to reduce volumes even further.

The new information from the Wall Street Journal backs up claims made earlier this week from analyst firm Consumer Intelligence Research Partners, which said that the iPHone 5s was outselling the iPhone 5c by a ratio of two to one. That also lines up with the live data being tracked by mobile analytics firm Mixpanel, which sees iPhone 5s adoption at just over double that of the iPhone 5c, a little over a month after launch. 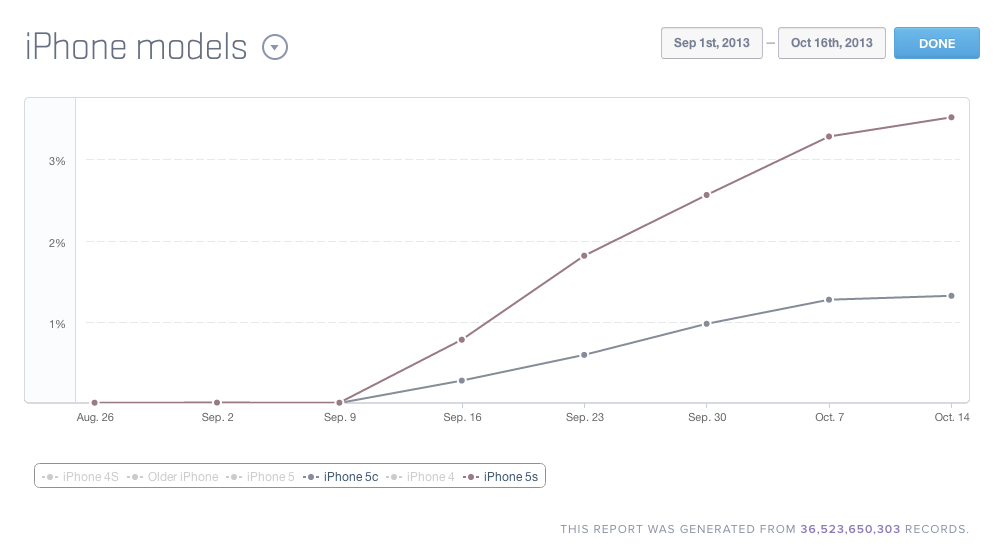 The above lines up with anecdotal reports we’ve heard from various Apple Store and carrier retail employees that the iPhone 5s is hard to keep in stock, while the iPhone 5c remains readily available. At first, it was unclear whether or not this might be attributable simply to an abundance of supply of the lower cost device, but increasingly, it seems demand plays a role, too.

Apple still managed to sell 9 million iPhones in total during its launch weekend, however, and the iPhone 5c isn’t designed as a marquee or flagship seller. What’s more likely is that interest in the iPhone 5c burns more slowly, but perhaps more consistently – its target shoppers aren’t the type to rush out to a launch day celebration, and are much more likely to be swayed by in-store specials and carrier/retailer discounts as time goes on and their contracts run out.

We’ve reached out to Apple for comment on the matter, and will update if we hear more.