Android plays host to some impressive tablet apps — I’m partial to IMDb and Flipboard to name just a few — but I’ve all too often downloaded an app only to discover that it’s a regular phone app scaled to fit a larger display. Needless to say, the experience was less than ideal. Now Google is pushing to shine more light on Android apps that are optimized for tablets with a pair of modifications that will go live starting on November 21.

The first change may be the more visually shocking of the two — Android apps that don’t fit Google’s tablet criteria will be marked as “Designed for phones” so users know exactly what they’re getting into before they download.

Meanwhile, the second deals with a feature Google rolled out earlier this year, a “Designed for Tablets” view that highlights (what else?) apps that have been crafted with specific tablet experiences in mind. Users will who scour the Play Store on their tablets will soon discover that those top app lists — think Top Paid, Top Free, Top Grossing, etc. — will show off those tablet-tailored apps by default (though users can reconfigure it to show all apps just like before).

Those Play Store modifications won’t go live for a few weeks yet, but the timing has me wondering whether or not Google is planning to push a new tablet at around the same time. I know, I know, past performance isn’t a guarantee of future results, but the Nexus 10 was originally revealed back in October 2012 and started hitting the Play Store’s digital shelves in November. And now that we’re hearing Google is preparing to officially out the Nexus 5 and Android KitKat and a revamped Nexus 10 sometime next week, it’s starting to seem like we’ll see a similar timeline unfold shortly.

And really, what better way to welcome a new raft of Android tablet owners than by showing them apps that really allow those devices to strut their stuff? It’s a win-win too — while those users get easier access to the best Android tablet apps, developers who spend the extra time to make sure their tablet experiences are more than just stretched-out phone interfaces can score some much-needed exposure. 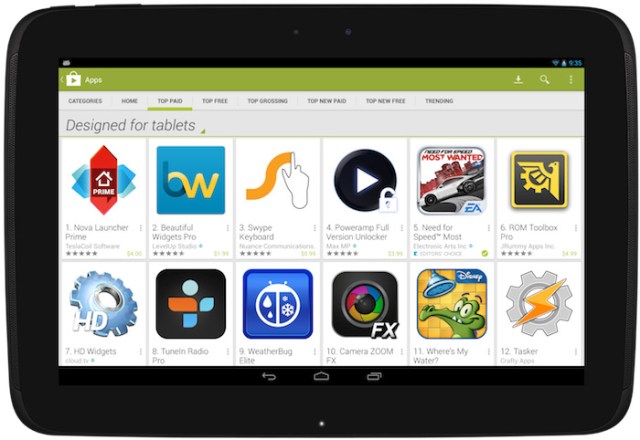