Despite the best efforts of vigilant parents, small children are like magicians with their ability to slip away unnoticed. BeLuvv, a startup in Taiwan, has created Guardian, a small wearable device that can be combined with a smartphone app to track your kid’s movements and prevent them from going into stealth mode. Guardian is currently available for pre-order and scheduled to start shipping at the end of November.

There are already several child safety devices and apps on the market (ones covered by TechCrunch include Alert.Us and Filip). Guardian hopes to stand out by using bluetooth low energy (BLE) tech, which has the advantage of being smaller, lighter and consuming much less power than GPS devices. BeLuvv CEO Johnny Fong says the Guardian tracker’s battery can last for four months to a year, compared to about 24 hours for most GPS trackers. The device’s $29.95 retail price ($24.95 for pre-orders) also make it considerably less expensive than most GPS trackers. 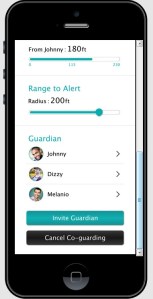 The Guardian device is paired with an iOS app (an Android version is in the works) that can be used to set a perimeter for each child, as well as a network of “co-guardians” ranging from one or two people to a wider group of family and friends. If a child goes missing, an emergency notification can be sent out to everyone who has downloaded the app.

The the device isn’t just for worse case scenarios, Fong says. Parents can use it to make sure their kids don’t wander too far away while playing in parks or at birthday parties. The Guardian tracker also works indoors. Fong was inspired to create the device after losing track of his child in a department store.

“I’m the father of two sons and I’m always concerned that my children will get lost in a public space. I’ve been thinking about this for a long time. The bluetooth technology is mature now and that’s the reason I wanted to enter this market,” says Fong.

He adds that BeLuvv will continue to focus on creating wearable device that take advantage of the hardware manufacturing capabilities in Taiwan. The next product in the Guardian series is a tracker for cats and dogs that uses the same combination of BLE tech and smartphone apps.