Founded by WeLab, a finance startup, WeLend is the first social lending platform based in Hong Kong. Since launching in early July, WeLab says it has received US$6 million in loan applications.

The social, or peer-to-peer, lending industry in the U.S. has existed since 2006, when Prosper and Lending Club were both founded. In mainland China, prominent peer-to-peer lending platforms include Creditease, SinoLending and PPDai. Despite Hong Kong’s status as an international financial center, however, there were no peer-to-peer lending platforms before WeLab launched. Simon Loong, founder and CEO, says the startup is currently focused on educating potential borrowers about WeLab’s services. Loong hopes his fifteen years in the banking industry, including a position as North East Asia Regional Head of Unsecured Lending at Standard Chartered Bank, will help WeLab gain credibility and grow.

Though informal lending clubs are common in Hong Kong, barriers to entry for peer-to-peer platforms include stringent financial regulations and competition from dominant players in the banking industry such as HSBC, Standard Chartered and Citicorp.

“In the past when you resided in the same village, you’d lend money to one another. That’s the essential concept behind the peer-to-peer model,” says Loong. “It’s an interesting fact that we hear often when we do user education. People say that their grandfather’s generation did this in their village. Now we are looking at how we can scale that model by using our banking experience.” 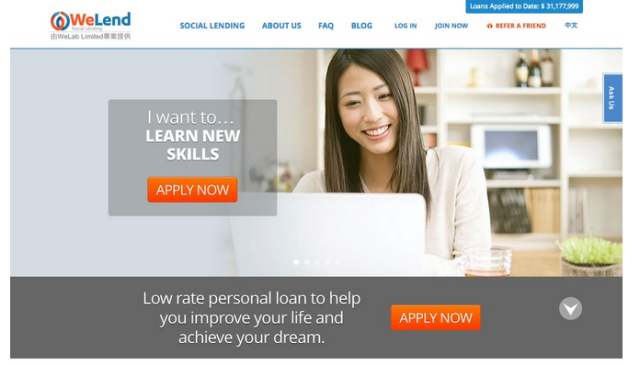 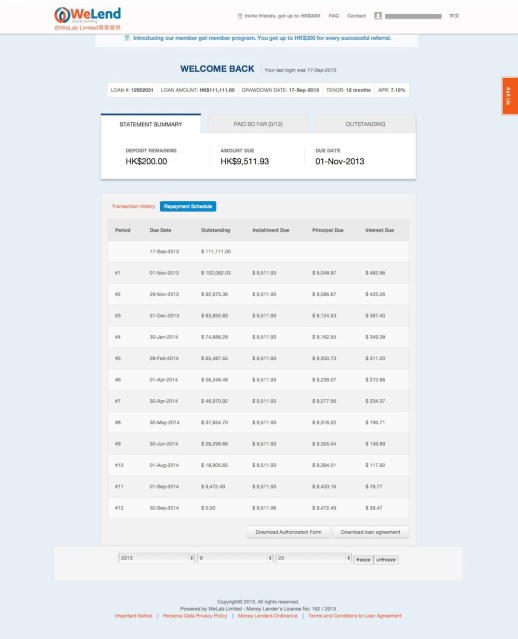 WeLab holds a money lenders license in Hong Kong and currently only accepts loans from lenders in the company’s private network. It assesses potential borrowers based their credit rating, as well as information such as income, occupation and property ownership. To optimize returns on its portfolio, WeLab currently only approves 20% of loan applicants.

Many of WeLab’s applicants want to consolidate debt and the platform also targets small-to-medium businesses seeking to borrow money. Its typical loan amount is currently US$10,000 to US$20,000 for a 24-month term.

Like Prosper and LendingClub, WeLab entices borrowers by offering lower interest rates than banks and other traditional financial institutions. The platform says its annual percentage rate (APR) ranges from 3% to 25%, compared to 7% to 35% offered by banks or 10% to 60% offered by consumer finance companies. Another attraction for borrowers is WeLab’s one-day application process, compared to the five to seven days required by many banks.

“So far we have US$6 million in loan applications, and momentum is good,” says Loong. “It took us 45 days to reach the first million, and 15 days to get to the second million in applications.”

WeLab’s next step is exploring how to scale up by understanding regulations and borrowing behaviors in different Asian countries. Loong says by targeting smaller, mature markets, WeLend has an advantage over peer-to-peer lending platforms in larger countries like U.S., China and UK.

“There are few mature Asian markets and knowing how to do one market doesn’t give you scalability. It’s still a relatively new concept for the U.S., China and UK,” says Loong. “They still have a long way to go domestically before international expansion, but we know the local, mature Asian markets.”

In addition to its peer-to-peer lending platform, WeLab will focus on building other online products that “democratize finance.” The startup has already raised a round of seed funding from private investors and is planning to raise a Series A in the first half of 2014.