Pinterest has made a point of discouraging the many social media companies that riff on Pinterest in their own brand names, with some of the more prominent of these going so far as to rebrand their services. And as for the rest? Get ready to go to court.

Today Pinterest filed a suit against Pintrips, a personal travel planning startup, accusing it of trademark infringement, false designation of origin, unfair competition and trademark dilution. “This action arises from Pintrips’ decision to adopt a social media brand that is confusingly similar to Pinterest’s, and its refusal to recognize, discuss or remediate the confusion it causes among consumers,” lawyers for Pinterest write in the complaint.

This comes in the same week that Pinterest won a $7.2 million case and an injunction against a cybersquatter called Qian Jin, who had registered more than 100 names that sounded a bit like Pinterest. (This is the same person who has also filed for trademarks that sound a lot like Quora.) And these are not the only trademark scuffles Pinterest is involved in: Path has filed for an extension of time to oppose Pinterest’s U.S. trademark application as it relates to its scripted P — the issue here is that it looks too much like Path’s “P.” We understand that this could get resolved without any court actions, however.

We wrote about Pintrips back in April of this year, when it launched a “collaborative trip-planning dashboard for tracking flights and prices across destinations in real-time.”

To be fair, if you look at the functionality of Pintrips, there is a lot there specific to planning travel that is not related to what Pinterest currently does.

Pinterest’s Pinboards are essentially image-led collections of links from around the web that users can share with each other, with the ability to follow specific Pinners or particular topics. Pintrips, meanwhile, is an online dashboard where users can track price changes for flights they may be interested in taking. Users collate flights by way of a browser plug-in. When installed, a “Pin” button appears next to different flight offers (those who support the service so far include American, Delta, JetBlue, Southwest, United, U.S. Air, Virgin America, as well as searches on Google, Expedia, Kayak, and Orbitz). By clicking the button they get added to your Pintrips dashboard.

Indeed, for Pinterest it is less about the functionality and more about the name attached to it. The full complaint, filed in the U.S. District Court for the Northern District of California (and embedded below), appears to rest on a few key points:

First and foremost, there is the issue of the names. Pintrips just sounds too much like Pinterest to the plaintiff’s mind. If you say both names out loud, they really do sound a lot alike. But more specifically, Pinterest has outlined rules against companies that use names that sound too much like its own. And it has already gone after companies that are trading under such names. “When Pintrips launched its own social media service, it could have adopted any number of trademarks. Instead it chose PINTRIPS, which is similar in appearance, sound, and commercial impression to PINTEREST,” the company writes in the complaint. “In doing so, Pintrips has chosen a brand that causes confusion among consumer and implies a connection, affiliation or sponsorship that does not exist.” 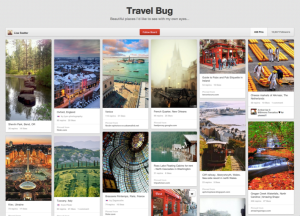 There is also the issue that Pinterest has a lot of content on its social network that is related to travel. “Pinterest has made a particularly big splash when it comes to travel,” the complaint notes. “Pinterest users have posted more than 660 million PINS in Pinterest’s ‘Travel’ category to date. Many people use Pinterest as a travel-planning tool.”

It goes on to note how many airlines and hotels, among others, use Pinterest as a marketing platform for their services. (A platform that, incidentally, will soon start to generate money with the introduction of paid ads, which is another reason why sitting alongside a similar sounding service is not sitting right with Pinterest.)

Perhaps most-eye-catching is the fact that certain mechanics on the sites are similar, and have similar names. Specifically, Pinterest believes that Pintrips’ “Pin” button is “confusingly similar” to Pinterest’s “Pin it” button. (They’re pictured up above)

In some regards, the buttons could be one of the more damaging aspects of the case. It is the “Pin it” button that Pinterest relies on to disseminate its service all around the web and to get people to keep using it from whatever other site they visit. Those little buttons also effectively act like little bits of advertising for the service. Pintrips is very much a David to Pinterest’s Goliath in this story, but the worry if it grows, its Pin button on travel sites may be mistaken for a Pin-it button. Moreover, if Pintrips is allowed to keep its button, what’s stopping others from following in that path? All of that spells brand dilution for Pinterest.

We are reaching out to Pintrips for a response and will update this as we learn more. Pinterest is not commenting for this story.