Meet the new Kindle, which is (almost) the same as the old Kindle. Amazon has been building LCD tablets – called Kindle Fires – for a mere 24 months and they’ve far surpassed the first clunky Fire with its BlackBerry Playbook-styling and fuzzy screen. This new model, called the HDX, aims to be a paradigm-shifting device for pure media consumption, as well as a tool for the worker on the go. With improved screen resolution and clarity alongside enterprise-grade security and support, the HDX is the avatar of Amazon’s retail prowess. It combines reading, watching and customer support into a package about as thin as a Reader’s Digest. Is it a great general-purpose tablet? No. But if you use it as directed, you’re going to be very pleased.

Amazon has updated their Kindle tablets almost yearly, and this year’s model amps up the Kindle Fire HD’s high-res screen and faster processor. Amazon has also slimmed down the tablet considerably, making it more on par with offerings from Apple and Samsung. The device is clad in black rubber with a band of shiny plastic along the top edge, and the screen has a half-inch bezel. There is a camera on the long side of the device which means video chats and photos are done mostly in landscape mode. 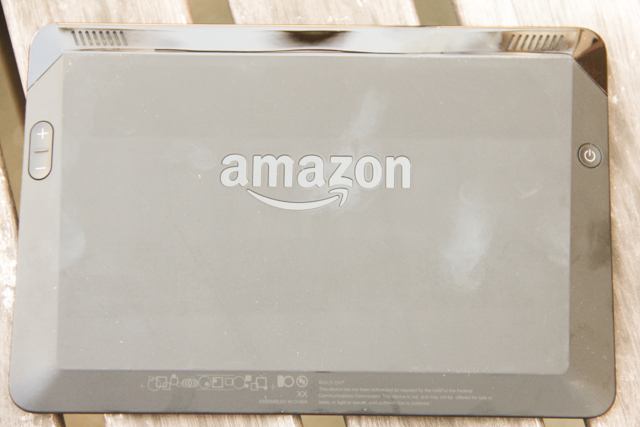 The Fire HDX is a locked-down device that runs Amazon’s own version of Android. Many of the same apps available for Android tablets are available in the Amazon store, but, it should be noted, not everything has been ported over. All of your favorites are there – Angry Birds and the like – and, given this is a reader first and an app machine second, you probably won’t miss what’s missing. You can also side-load audio and video using a USB cable and download MP3s and various video files from the Internet.

If you’re familiar with the Kindle Fire HD you’ll find little different in the way of user interface tweaks or usability. Fire OS, as Amazon calls it, has menus on the top and bottom and a persistent “home” and “back” button that gets you back to the main screens. You select books and media by sliding through the home screen – your favorites and popular/new items appear here – and then you can visit your apps, books, and movies by tapping the right button. Amazon also prides itself on Kindle FreeTime, an app that measures screen time for kids and kicks them off if they’re watching too many movies or playing too many games. It’s a boon for parents and means the Kindle is a great choice for the wee ones.

There is a front-facing HD camera for video chats via Skype and other supported applications, and there is a “quiet time” button that turns off your network so you’ll stop checking Twitter when you should be reading a novel. These are ancillary but helpful features to be sure. 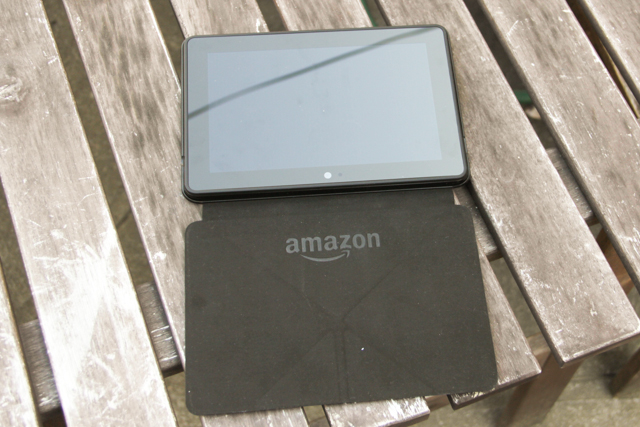 Also updated is enterprise support, allowing you to carry the tablet to work and connect to local VPNs and secure websites. Why did Amazon add these features? It’s estimated that the Kindle Fire is the second most popular tablet in the U.S. after the iPad. That said, the low price and bright screen make it a perfect work device – you can bring and leave it at the office and, given its ereader pedigree, the CEO and IT can use it to read business books and manuals. Amazon is definitely talking up its enterprise support and they’ve added certificate management, as well as secure browsing. The new OS also supports remote management via services like Citrix and Airwatch, giving IT managers complete control over the devices in the office and in the field. It’s not particularly amazing if you’re not in charge of an IT department, but it’s a boon if you are.

Overall the new HDX is far different – and far more interesting – than the original Kindle Fire HD. However, older devices will receive the updates available to the HDX, although some features – like Mayday – may not work.

The screen is the real draw on the HDX. At 1920×1200 pixels, images pop, movies look great, and text looks completely solid without a jaggie or pixellation in site. Although hi-res screens aren’t new, the HDX’s is nicely tuned and offers similar performance to the OLED screens on Samsung Galaxy Tabs. While impressive, I fear we’ve reached “peak pixel” and the color fidelity and smoothness of the on-screen images and text are on par with other tablets I’ve seen. While Amazon is right to crow about how great the screen is, I don’t think it will be a primary reason to buy the device. 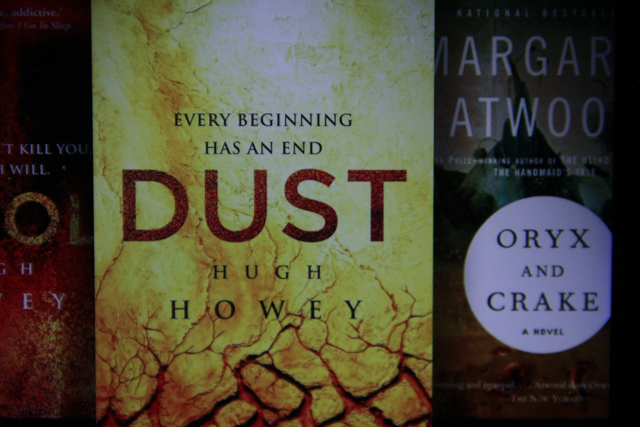 How does it work in bright light? Very well, but I still prefer e-ink devices in full sunlight. Because the HDX can sense and respond to ambient light, the entire screen remains visible in sunlight and can dim itself a bit when you’re in a dark room. I tried it on the back patio in fairly direct Brooklyn light and it worked fine. Your results may vary.

The 2.2-GHz, four-core Qualcomm Snapdragon 800 processor that powers this tablet also powers tablets from Sony, Nokia, HTC, and even the upcoming Nexus 5. What does that mean, in practice? There are no clear lags between button presses – a problem I noticed on the original Fire HD – and excellent gaming performance. As I point out, you’re also not buying this tablet for the processor. Although Amazon may tout the specs and performance in its marketing materials, the processor helps mostly to add a bit of realism to games and make page turns smoother. The graphics benchmarks I ran saw impressive performance – 60 fps for some HD demos and some truly striking rendering times – but I’m loath to talk up the processor very much. Rest assured that if you play Asphalt or a similar driving game, you will see a noticeable difference. The tablet scored 19,571 in the Quadrant Standard benchmark vs. 6068 for the HTC One X and 18,500 for the Sony Xperia Z. The Galaxy S4 hit 12,200 in the same test. This doesn’t prove much – just that the processor is very fast – but it does back up Amazon’s processor claims.

X-Ray for Music deserves special mention because of its simplicity and utility. Basically the service offers a live “follow the bouncing ball”-style display of music lyrics, something that helps if you’re, say, trying to decipher One Week by the Barenaked Ladies. It also provides artist and album information. 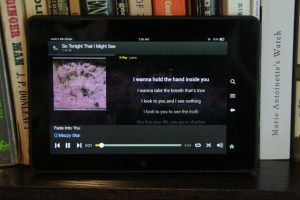 X-Ray also works on videos, adding context as well as cast lists and soundtrack information to movies and TV. These allow you to turn the Fire into a second screen and even find bloopers and mistakes in video content thanks to IMDb integration.

Mayday may be Amazon’s biggest innovation in this new version of the hardware. It is, in short, an amazing idea well-implemented. While, obviously, the most pressing problems a user could have with the Kindle is getting online, we can only assume they have some grasp of Wi-Fi passwords and can clear that hurdle. After that, nearly anything could “go wrong,” and Mayday is there to fix it. The Mayday button essentially calls up a dedicated customer service specialist on your screen who can view your settings, modify and control the UI, and draw, virtually, right on your device. It’s a 24/7 service and Amazon hopes to have a 15-second response time. Given that support is 90 percent of customer satisfaction, I’m almost positive this feature will reduce returns and improve the popularity of these devices. 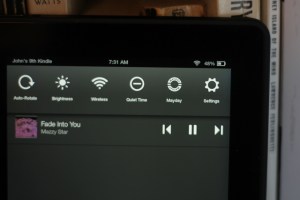 You can read a bit more about Mayday here, but given the ease of use and simplicity, it’s a great and very useful feature. I can imagine giving a Kindle to my mom now and trusting she’ll be able to call Amazon for quick support questions, something that would be impossible with an iPad or Android device — at least on the scale proposed by Amazon. Sure there are remote control apps out there, but Mayday has turned the entire tech support idea on its head. Rather than bringing your device to a store, you bring the tech to your home. It is ingenious.

The powerful processor does shine, and the Kindle’s image-editing software is, in a word, cute. It features a number of filters and tools for fine-tuning images, but it also lets you create “memes” – basically by adding text to the top and bottom of your image – and add stickers to your images. 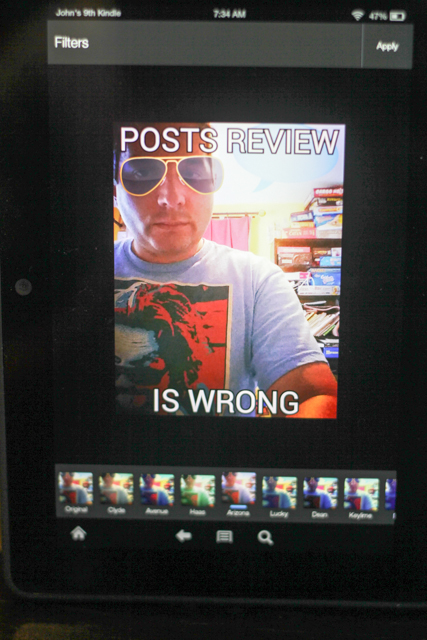 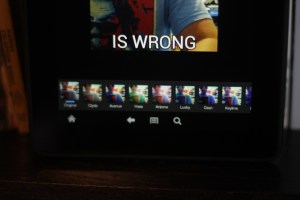 However, it is important to note that this is one of Amazon’s first forays into content creation and could mean the beginning of further improvements to the platform as a creation engine rather than a simple consumption system. Again, I’ve seen far better cameras and far better image editors on iOS and Android devices so I’ll just say this is an excellent start and it’s one of the few points where the high-powered processor helps the product hum.

If you’ve followed the travails of Barnes & Noble and the Nook, it doesn’t look like the Kindle Fire will have many competitors in the dedicated reader space in a year or so. That’s why I’m impressed with this new iteration – it assumes that competition is still hot on Amazon’s heels, and it shows that they “still have it” when it comes to hardware design. Even at a starting price of $229, it’s clear that Amazon isn’t making much on this hardware but rather depends on the value of its content to boost revenue.

If your aim is to run the gamut of Android apps or experience the ecosystem completeness of iOS, then the Kindle Fire isn’t for you. It’s best for folks who have been looking at a tablet as an ereader first and who will slowly discover the other features. It’s not a productivity tablet or particularly good at email or personal information management (although Amazon has improved the mail app to a degree). It’s not particularly good at remote management of servers or giving you access to a command line or even allowing you to update the OS with homebrew mods. It is good at being a versatile media machine with a few tricks of its own to ensure user lock-in and popularity. 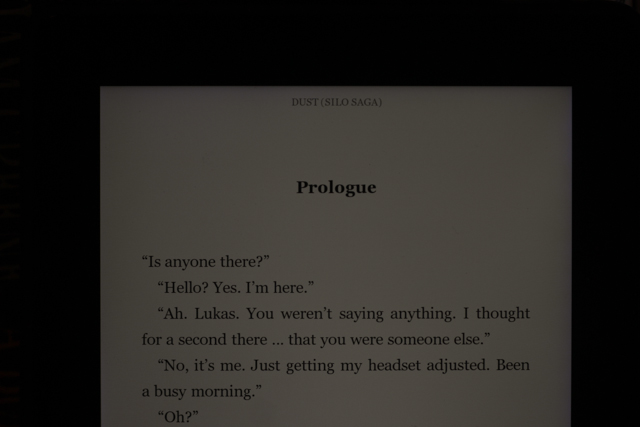 There isn’t much to complain about regarding Amazon’s latest tablet except for the fact that it is an Amazon-only product. Sure you can side-load content and mess around with document conversions, but at its core, you’re expected to stay firmly in the walled garden of Amazon’s Prime content system. If you already have a large library of Amazon content then a device like the Fire HDX is the perfect device to consume it on. It is built, from the ground up, as an extension of Amazon’s retail might and acts as a lens through which you can see and gain access to your Amazon content. It is not open in any real sense (but I would argue that even Android is a walled garden these days) and is not conducive to active hacking.

Otherwise, there’s little to discourage folks who just want to read a few good books and watch a few movies on a great screen from picking this up. 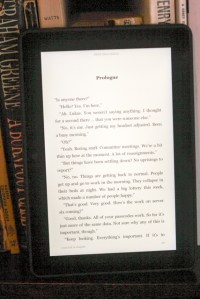 Amazon is now a major player in the tablet wars, and this is one of their strongest weapons. The price, features, screen, and software work in concert to offer one of the best media experiences. The Kindle is obviously not for everyone – it’s not even a great distraction-less ereader (that crown would go to the e-ink Kindle Paperwhite) – but as a general-purpose media device, it’s great. It is Amazon incarnate.

Who should get the HDX? I’d recommend it to people who are looking for a second screen and may not treat their tablet as a primary personal information management or email machine. While these features are available on the Kindle, they are not the software’s strong point. Like a reversed mullet, the Kindle HDX is party up front and business in the back.