Is it over for paid mobile apps? That’s the general thinking these days, as the App Stores fill up with “good enough” alternatives to paid apps, while major publishers game the charts with free offerings that make millions which can then be used for their ongoing user acquisition efforts. That’s one of the reasons why the top charts of the App Store have gotten so difficult to break into for new publishers today, in fact.

The evidence for the trend toward free apps was rehashed again in a series of blog posts and other online discussions over this past weekend, written by those in the know – app developers themselves who are today still trying to make things work. But the data presented was largely anecdotal. App developer David Smith and his wife spoke spoke it. Elsewhere, Instapaper founder Marco Arment wrote about his struggles to determine the appropriate business model for his own new app, Overcast.

These were more personal tellings of the same story which has been reported through harder data for months on end. But that data contains some nuances which shouldn’t be ignored, especially for paid app developers trying to squeeze out profits from a less competitive niche. Yes, apps overall are trending toward free, and a majority of the App Store is composed of free apps – but there are a few areas where a paid app might still work…at least, for now.

THE SHIFT TO FREE

Going back a few months, analytics firm Flurry reported this July what the shift toward free applications looked like at the time. From 2010 to 2012, the proportion of free apps on the App Store ranged from 80% to 84%, but by early 2013, that had grown to 90%. And 6% of paid apps fell into the 99 cents price point. 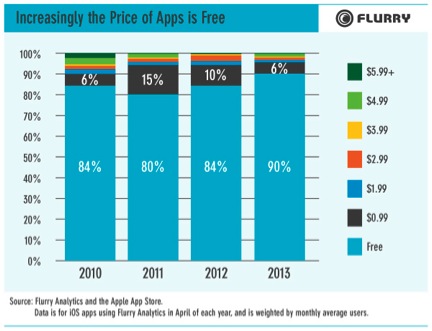 At the time of the original report, Flurry noted that it seemed like people wanted free content more than they wanted to avoid ads, or have the highest quality experience possible.

According to Flurry’s Director of Research, Mary Ellen Gordon, PhD., the most compelling piece of evidence to support the shift to free was Flurry’s observations of developer A/B testing. They watched as developers experimented with different price points over the past months, finally resolving themselves to free apps, often supported by in-app purchases.

“It suggests that developers are not just moving to free apps because everyone else is or it seems like the thing to do. Many of them have actually tested different price points,” she tells TechCrunch. “Based on the trends, I would guess that by next year the (weighted) percentage of apps that are free will be somewhere between 91% and 93% — greater than it is now, but not 100% because there will probably always be certain specialized apps that are able to charge for downloads.” 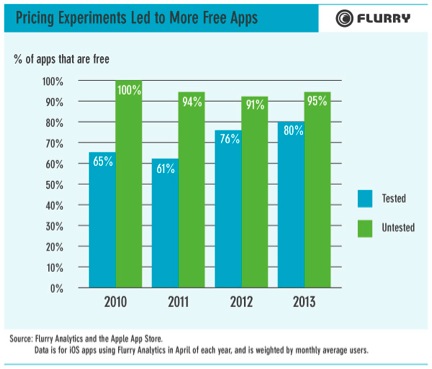 So where might paid apps still have a shot? In other words, are there categories where those specialized apps are selling? We spoke to app analytics firm Distimo, which examined grossing data on the App Store’s leaderboards to determine where paid apps are doing well.

In the following categories, the firm found that at least half, if not more of the top ten apps are currently paid: Productivity, Medical, Business, Healthcare & Fitness, Navigation, Catalogs, Lifestyle, Photo & Video, Travel, and Weather. In some cases, paid apps also use in-app purchases to drive up revenue even further. 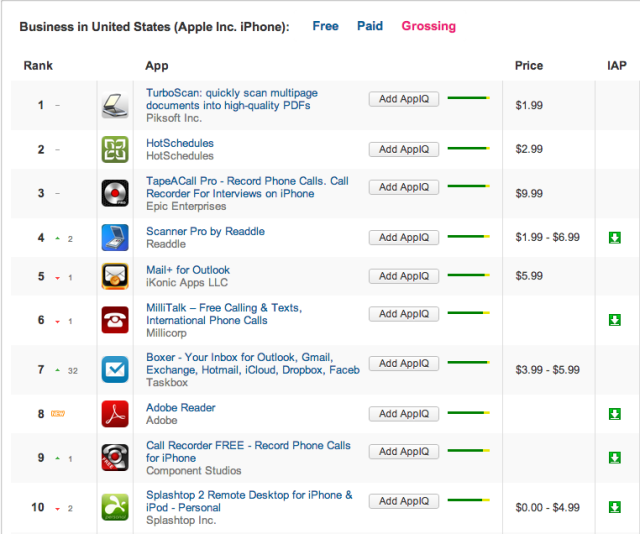 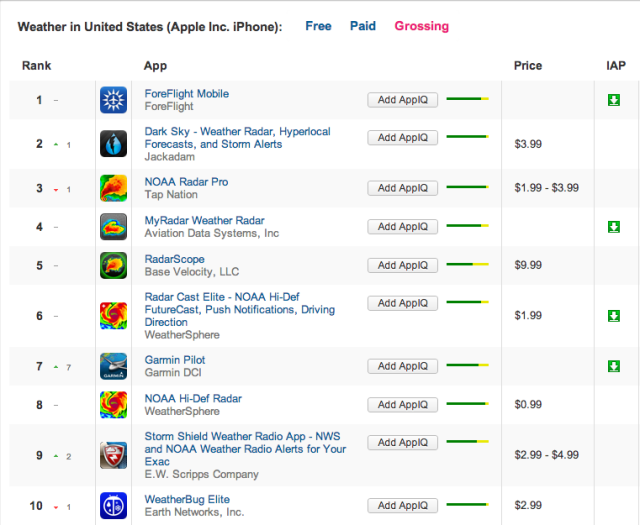 What’s interesting about this list is that it’s very utilitarian, for the most part. These apps about are about getting something done – booking travel, dealing with your health, checking the weather, working, photo editing – things users do often enough to make it worth paying for the upgraded experience or additional features beyond what you could get in a free version.

Notably absent, of course, are several of the larger App Store categories, like Games and Social Networking. Minecraft was the only top grossing game that was also paid, and Grindr Xtra was the only top grossing social app that was paid. In addition, highly grossing applications in Books and Newsstand categories also tended to be free applications to start.

In general, however, Distimo’s data confirmed Flurry’s in that it found free applications led most categories, with in-app purchases as a main driver of monetization, and this was especially true in the Games category. In addition, 67 percent of the current top 10 apps across all categories combined use in-app purchasing today.

Paid apps aren’t going away entirely, says Distimo, but getting traction for a paid application will depend on a number of things, including target audience, category, competition, and more – just like in any business.

Still, Distimo’s analysis focused on the top of the charts, so it doesn’t necessarily paint the most accurate picture for what it’s like for a smaller or medium-sized developer competing today. Breaking into the top charts is often a function of marketing dollars, and money spent on user acquisition strategies, as well as a combination of more subjective things, like app quality, social impression, utility, and of course, luck.

The window for paid apps is definitely getting smaller, but there are still a few success stories out there to analyze, for developers determined to try the paid upfront business model. Yet even then, developers have to make sure they don’t alienate their current user base, if launching an upgraded experience as the new paid app, like Clear just did before having to change its course.

In the long run, unless a paid app doing something unique and notably better in a less competitive niche, consumers are looking for the free apps first.

Developers lament this trend, noting that most paid apps are worth less than a cup of coffee, and that’s a “hard pill to swallow,” as developer Florian Kugler recently put it in a widely circulated post on Hacker News.

From a user’s standpoint, though, it’s not about whether that app is worth the money, it’s about how that money adds up over time. There are nearly a million apps to choose from now – who can afford to buy a new one every day or every few days, the way you do a cup of coffee? Come to think of it, if you’re buying a fancy latte every day instead of snagging the free stuff from the break room on occasion, then you might have some other financial management issues, too.