The U.S. government is a complete mess. Congress could not even perform its basic constitutional duty to fund the government and had to shut down most of the public system. Amid the partisan spectacle, the White House promised that the shutdown would not interfere with a new website for comparing health insurance prices, which is now mandatory under the Affordable Care Act, or Obamacare.

Unfortunately, the comparison site, the Insurance Marketplace, is a rash of glitches and delays: parts of the website intermittently crash, some states don’t have the promised calculator for comparing prices, and at least a few states and demographics don’t even have access to the marketplace.

Regardless whether you’re a libertarian, it is exceedingly difficult right now to have faith that government can follow through on its promises.

Since the summer, the Obama administration has been prepping the American people for the introduction of the new healthcare law. A major part of getting everyone to sign up for (mandatory) health coverage is a new website that, for the first time, permits Americans to easily compare prices and plans.

Yet, starting a month ago, the plan started to unravel. The exchange for small businesses has no launch date. The entirety of Washington, D.C. is also delayed. Last night, I couldn’t access Oregon’s Internet Marketplace, which, ironically, was a White House case study in how transparency could lead to more competitive pricing. 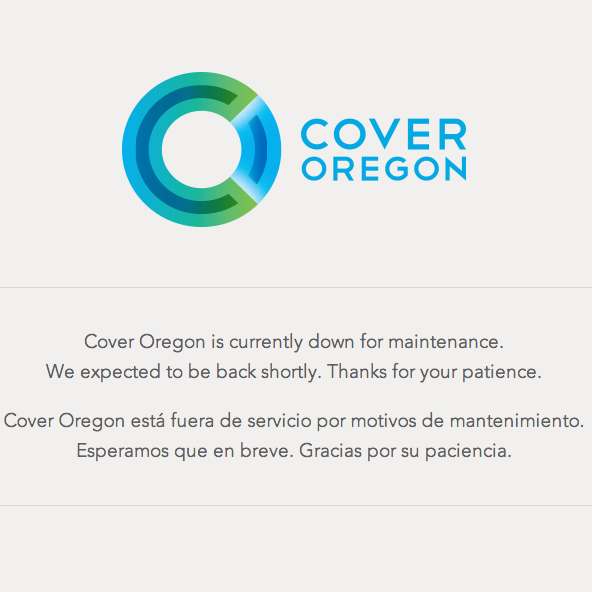 Today, the website appears functional, but the most important part, the insurance calculator, has crashed.

Oregon isn’t the only failed website: For at least part of the morning, the main site, healthcare.gov, was down; Florida residents couldn’t finish the login process; Nevada’s Spanish-language site isn’t ready; Healthcare.gov’s live help chat system was down; Maryland residents were reportedly unable to sign up; and Colorado’s website can’t properly calculate subsidies.

“These problems can have costly consequences. At least a half-dozen states, including Colorado and Oregon, have said that they won’t offer full online enrollment through their exchanges because the federal hub that is supposed to link to help them determine the subsidies people are eligible for isn’t working properly,” writes American Enterprise Institute fellow Scott Gottlieb, for the Wall Street Journal.

“If the hub can’t verify this, the individual will get booted from the ObamaCare enrollment system and shifted to a call center for confirmation by an ObamaCare agent who is likely to be fielding a deluge of complaints. Some people will end up getting subsidies they weren’t qualified for. Washington eventually will have to try to claw back the money. This will create a massive pay-and-chase challenge as people move in and out of the exchanges and get subsidies that many of them won’t even know they didn’t deserve.”

Now, President Obama is warning of months of glitches.

Yet, even under the best scenario, where the government can maintain a website, the pricing information is misleading.

“People may be totally motivated by the cost of the policy and spend not an adequate amount of time looking at the deductibles and the co-pays and what is covered,” Kenneth Davis, CEO of Mount Sinai hospital, tells me.

Consumers, especially those who have never had health insurance, lack the knowledge to properly understand all the potential costs down the road. A high deductible may mean poverty-threatening costs for those who choose the cheapest plan. When the health insurance exchange eventually rolls out, the average consumer will be inundated with 52 options. Under that combinatorial nightmare, many will select on price alone, potentially under covering themselves.

Ezekiel Emanuel, President Obama’s former healthcare advisor, told me that he expects a cottage industry of private comparison sites that better tailor a consumer’s options to their individual needs. But, he predicts they won’t be around until the end of 2014.

Why wait till 2015? For some inexplicable reason, the comparison websites are run entirely by the states. I reached out to Health And Human Services a week ago to explain why they didn’t open up the pricing data to individual entrepreneurs, and have yet to receive a response.

In short, my government is a colossal failure right now.