Last month Google finally rolled out an invite-only Beta of its real-time API for Analytics that will allow developers to programmatically take action based on the real-time data they get from Google’s service. However, competitor GoSquared, backed by London’s Passion Capital and Fred Destin’s Atlas Venture, has had an API of sorts out in the wild for over 2 years.

Today the feisty old but young UK startup has released a supercharged version of that API, essentially providing developers with the nuts and bolts to build their own analytics service, dashboards, and make automatic data-driven changes to their sites, all powered by the GoSquared platform.

“The old API was a basic way of accessing real-time ‘how many people are online?’ style figures,” says GoSquared co-founder James Gill. In contrast, his says the new API is written from the ground up and introduces 10 entirely new API functions, including months of historical data.

“[It’s] unarguably the easiest to use analytics API available. To anyone who’s tried using the Google Analytics API, the GoSquared API is like a breath of fresh air,” says Gill.

Fighting words, indeed. But then GoSquared perhaps has reason to be bullish, having grown the paid-for service to 40,000 sites powered by its real-time analytics, as well as rolling out an entirely new version, including an updated Dashboard, and relaunch of Trends to include new metrics around growth stats. “We’re tracking billions of page views per-month month, huge amounts of data, [and] we’re now handling analytics for some of the largest sites around,” Gill adds.

It should be noted, however, that alongside Google the company has another heavily funded competitor in Chartbeat. 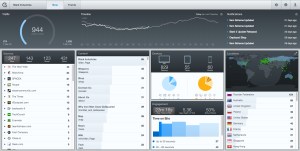 Returning to the new GoSquared API, it lines up as follows:

Use-case examples for the API cited by GoSquared include a “trending articles” widget on a publisher’s site, a real-time analytics dashboard for internal use (GoSquared is eating its own dog food here by using the API to power its own offering), a 3D visualisation of where in the world visitors are coming from, or an e-commerce site offering visitors discounts on popular items in real-time.

More ambitiously, a service could provide analytics for its own user-base, letting GoSquared do the heavy lifting instead of building their own analytics engine. “Ultimately, if you can think of it, and it’s data-driven, you’ll likely be able to build it with the GoSquared API,” says the company.