While most mobile applications today are heavily concerned with getting users to remember to open them regularly, mobile deal-finding application Shopular has been content to run in the background, alerting consumers to sales and discounts when they’re in a store or mall. Now, its focus on practicality over spammy behavior has paid off, in the form of a $6.4 million Series A round, led by Sequoia Capital. Sequoia’s Tim Lee will also join Shopular’s board of directors.

The startup had previously raised a seed round from Y Combinator and other angel investors, including Adam D’Angelo. 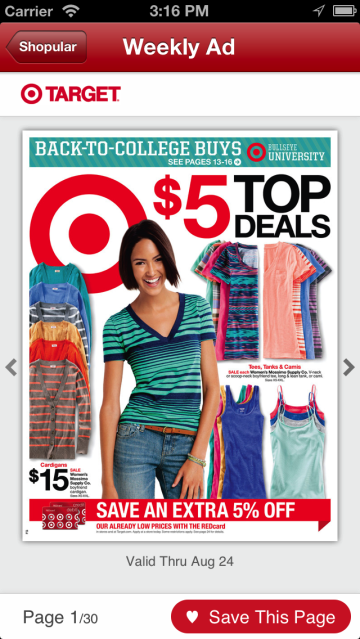 “We have a lot of respect for Shopkick for showing the world mobile can be used in novel ways for physical retail,” says Loiwal. However, the team wanted to build something that was more intuitive and logical for consumers. Where Shopkick rewards users for walking into stores and making purchases, Shopular is a tap on the shoulder letting you know why you should walk into a store.

The company uses its own proprietary technology to source deals, grabbing everything posted online, emailed offers, and even items posted to retailers’ Facebook Pages. It combines these into a deals database, which today includes deal info for a majority of retailers here in the U.S., from big names like Walmart, Target, Home Depot and others, down to speciality women’s clothing retailers, beauty brands, jewelry stores, kids’ shops, and more.

Consumers, meanwhile, can configure the app further by selecting their favorite stores, or opting in to hear about upcoming sales, but as Loiwal had previously explained, “the minimum you need to do is put the app on your phone. Forget about the app, and you’ll start saving money every time you go out shopping.”

Today Shopular works in 40,000 store locations across all 50 U.S. states, giving it coverage on nearly every mall, strip mall, or standalone big box store. Loiwal declined to provide user numbers or engagement metrics, however, only pointing at the app’s 10,000-some ratings on iTunes and Google Play, where it has a 5-star and 4.8-star rating, respectively. He also noted that Shopular’s demographics are 80 percent female, with two distinct groups – teenagers who spend a lot of time in malls, and younger, budget-conscious moms ages 25 to 35. 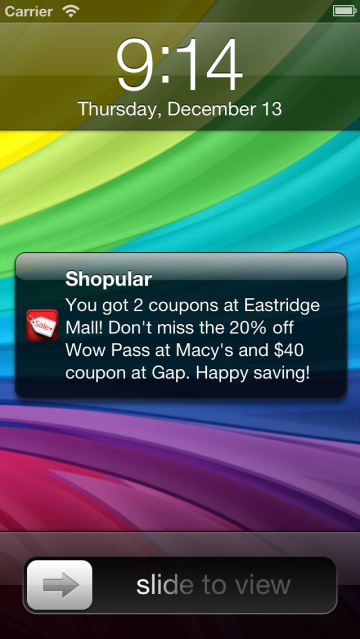 Until now, the focus for Shopular has been on growing its customer base and store coverage, not revenue, but with the new funding, the company plans to take the next step which involves working with retailers directly. Loiwal says they’ve already begun running tests with select retailers on a feature that would allow the brands to communicate with shoppers via the app.

“Retailers have two main problems: getting foot traffic to their stores, and second, communicating with the consumer when they’re walking into the store rather than checking out,” Loiwal explains. Shopular will serve as middleman for those messages. The question the company is trying to answer now is how many conversions it can make for a business when it has the ability to reach out to the people around you. “We saw metrics that were on par on some of the big networks that were used to run the same promotion and the same time,” adds Loiwal of these early experiments.

Other things Shopular is keeping its eye on include retailer adoption of Apple’s iBeacon technology and user demand for an iPad-optimized version of the Shopular app. But the bigger focus will be on increasing the app’s personalization aspects by taking advantage of all the data it has built up on consumer behavior over the course of the year.

“We’re trying to understand you better through your use of the app, but also understand how similar you are to other users,” explains Loiwal. “And we’re working on something that could provide you value that goes on beyond the coupon,” he teases, but declining to provide details.

The startup has been running fairly lean with just a four-person team, but with the infusion of capital from Sequoia, it plans to hire at least nine people over the next few months, split between engineers and those in product design, marketing and sales.

Broadly speaking, the app competes with not only Shopkick, but also other mobile deal finders including RetailMeNot, Jifiti (to some extent), couponing apps like SnipSnap, daily deals apps, and others.

An updated, more iOS 7-friendly version of the app is also poised to ship, but in the meantime, you can check out either the iOS or Android app here.