Something magical is happening: Indie bookstores are coming back for a few very interesting reasons. While the rise of digital books has definitely put a dent into the fortunes of bookstores – you can read all about it at your local Borders store – it seems something else is at play here.

The chart below is a bit misleading but it’s a useful signpost to understand the concept. Over the past decade, Indie bookstores closed at an alarming rate until about 2005. Then, over time, the numbers slowly started creeping up leading to positive growth in 2012. While this data represents that growth visually, it is taken from American Booksellers Association membership rolls which might not reflect the true number of indie bookstores. 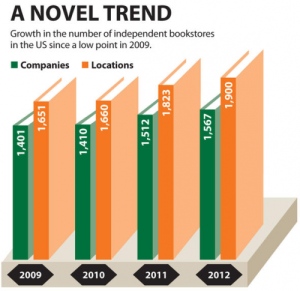 Given this data, it’s clear that Amazon wasn’t the one that killed the bookstores – it was the rise of the big box players. After all, the first Kindle launched in 2007, a few years after the decline peaked. As Nate Hoffelder of The Digital Reader writes:

The thing is, Amazon wasn’t nearly big enough in the 1995-2002 period to be responsible for killing indie bookstores. No, that honor goes to the big box bookstore chains like B&N and Borders.

I don’t think paper booksellers are out of the swamps yet but there is one good reason they can stay alive: they act as a community hub and a place for authors to read and sell books. Just as recorded music didn’t kill concert halls, authors need a place to show up in person. If there were some way – and I’m sure there is – for bookstores to get a cut of ebook sales sold in store I think that could reduce some of the doldrums. Booksellers are now mostly coffee shops that happen to sell books. That’s definitely a noble profession and it’s definitely an important part of the bookselling ecosystem. And, thanks to the death of the Big Bookstore we’re almost guaranteed better selection, curation, and intelligence from the indies.