The largest mobile messaging apps are increasingly social platforms in their own right. There is more evidence of that today as Line Corporation‘s Line — which had around 250 million registered users at last count — has added yet another feature to its platform play in a v3.9.0 update to its iPhone app (Android users will get the update “in future”).

Snap Movie allows for Vine-style short video sharing, which gives Line users yet another way to communicate with each other without having to leave its social, entertainment playground.

Or, as Line puts it:

Now LINE users can participate in the global trend of sharing their own original video clip and BGM arrangements.

As with Twitter-owned Vine, Snap Movie lets iPhone users of Line create a short video for sharing that’s composed of one or more scenes by recording footage by holding their fingers down on the screen. Line’s videos have a little more flexibility in length than Vine’s, which caps footage at six seconds and ties them into an automatic loop. Line Snap Movie videos can be between four and 10 seconds long.

Line also lets users add background music (that’s BGM in Line-speak) to accompany their footage. Or it lets users stick with the plain recorded audio. Snap Movies can be posted in Line chatrooms, to individual or group chats, to your Line home, or saved to your phone (but the latter option appears to only be available after you’ve posted the video somewhere within Line first).

Here’s a quick 10-second test video I shot using the new feature, adding BGM (‘Where is my cookie’) for comic effect:

The v3.9.0 update also adds a video calls feature to Line’s iPhone app — bringing it in line with rival messaging apps that were already offering video calling, such as WeChat and Viber (and indeed Apple’s own FaceTime iMessage offering). 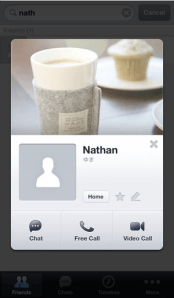 Other new features in the updated Line iPhone app include a collaborative group photo album feature; privacy post tweaks so users can set the privacy level of individual Line Home posts; the ability to delete users from blocked/hidden lists; and iOS 7 updates.