Google is reportedly making a change to its homepage and other online services that will see it dropping its horizontal, black navigational bar containing links to social, search, Gmail, images, news, and more, in favor of a new menu that more closely resembles the app launcher icon found on Android smartphones. The new square-shaped button, which instead launches an app grid containing colorful icons pointing to Google’s various properties, will appear at the top of Google websites, next to the notifications button and links to users’ profiles.

This design has been in testing for the better part of 2013, with some seeing the then-experimental interface as early as February, according to the unofficial Google-watching blog, Google Operating System, which was also among the first to spot what appears to be official confirmation of the new design’s ETA by a Google employee.

On a Google+ post where a user was sharing a screenshot of the updated look-and-feel, Google+ Community Manager Justine Rivero commented, “Glad you noticed! We’ll be rolling out this new feature in the next few weeks…stay tuned!” Before today, Google has only been showing the updated navigation menu to portions of its user base as an experiment. It had not yet announced that the menu would be more broadly rolled out.[Update: Google announced the news publicly after we posted.]

Searches on Google+ this morning indicate that a number of users are beginning to receive the changes, and are posting screenshots with comments like “gone is the black bar,” “no black bar,” and so on. Twitter users are seeing the same thing.

Other sites are also reporting that the new navigation menu will appear across Google properties beyond Google+, including Search, Gmail, Blogger, YouTube and more. The same “app launcher” interface has been seen on Chrome’s new tab page, where it can currently be enabled as an experiment, too. 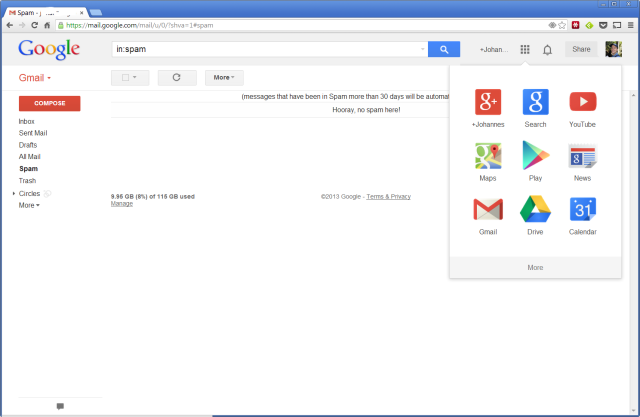 The launcher currently shows icons for top Google services like Google+, Search, YouTube, Maps, Play, News, Gmail, Drive and Calendar, but allows you to access others by clicking “More.” This reveals Translate, Books, Offers, Wallet, Shopping, Blogger, Finance and Google+ photos. Three services found on the black nav bar, but not in the new menu, are Images, Videos and Google Mobile.

The updated menu makes sense for Google, as it’s trying to streamline its properties across platforms, including Chrome OS, Android, desktop web, mobile web, mobile apps and other online services. The new navigation menu looks like the Chrome OS app launcher, while also recalling Android’s app launcher and app grid. And the lighter design fits in better with Google’s preference for card-style user interfaces and the move away from the darker tones in its designs.

Though the confirmation about the nav menu was posted by a Google employee, we have not yet heard back from Google’s communications team to re-confirm the news, or the ETA. There’s always a chance that the menu will still only be rolling out to select users or Google+ members, or that it will co-exist with the black navigation bar, before a final switch. Stay tuned.

Update: Google responded by pointing us to a blog post they published after we did. More details here: “Google Makes Its New Flat Logo And “App Launcher” Style Nav Menu Official, Will Roll Out Over The Next Few Weeks.”

[View the story “Google’s Black Bar Is Gone” on Storify]