PayByGroup, a 500 Startups-backed payments platform that lets friends split the cost of purchase on bigger items like vacation rentals, parties, trips, sports tickets and more, is now making its service available internationally. The San Francisco-based startup has partnered with 53 payment gateways in 71 countries, including France, Brazil, Germany, India, and others, in response to what CEO Camilo Acosta ascribes to merchant demand for the service overseas.

The company first launched into beta around year ago to fill in a missing piece within the online payments ecosystem, where today it’s still somewhat difficult for a group of people to easily split large transactions. While a number of apps like PayPal, Google Wallet, Dwolla, Braintree’s Venmo and others let users send peer-to-peer payments, which works well for paying friends back after they pick up the lunch tab or other smaller purchases, PayByGroup instead inserts itself at the beginning of the transaction process, allowing a group to raise funds in advance of a larger purchase.

This puts it more in line with crowdfunding sites like Kickstarter or Crowdtilt, in terms of structure, but those tend to be used for bigger, more public-facing money-raising campaigns. In Kickstarter’s case, that’s often new startups looking for crowdsourced funding. Crowdtilt, meanwhile, is more on par with what PayByGroup does, as it highlights purchases as one of its use cases.

But while consumers can use PayByGroup directly to raise money among a group of friends, the startup’s bigger revenue push is in gaining merchant adoption. Today, merchants pay the credit card fees associated with their own processor (or PayByGroup’s, if they choose), and then their customers pay a 2.5 percent fee if the purchase hits the minimum needed to “tip.” That is, a minimum threshold must first be met before a transaction is kicked off on the consumer’s behalf. Acosta says that 85 percent of group purchases reach this point. There’s also a ceiling of $25 per person for the fees, so very large purchases don’t overburden users. 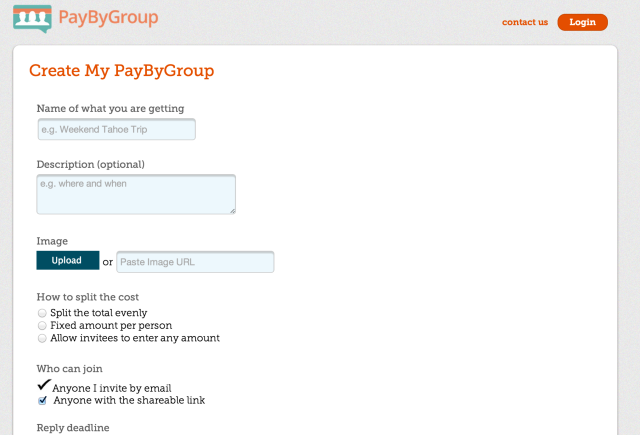 Domestically, PayByGroup works with gateways like Braintree, PayPal, Dwolla and Stripe, as Acosta explains his company is “processor-agnostic.”

“Our value-add is in making group sales happen,” he says, “not processing.”

Current PayByGroup merchant customers include pro sports teams in the NBA, WNBA, and Major League Soccer, but Acosta says the majority of its transaction volume comes from those in the travel and lodging space. The company is working on integrations with two of the largest lodging companies in the world at present, but is not yet allowed to publicly disclose those businesses by name. (The company’s website features logos for HomeAway and FlipKey by TripAdvisor, however).

Also new for merchant partners are APIs, which will allow them to more easily integrate the service into their own websites and applications going forward. Before, they had been using JavaScript integrations.

Acosta declined to provide exact figures indicating customer base or revenue, but said that transaction volume is increasing by 20 to 40 percent every month, and is now in the millions. 500 Startups has re-upped its investment three times, as well, but Acosta also declined to detail PayByGroup’s total funding.