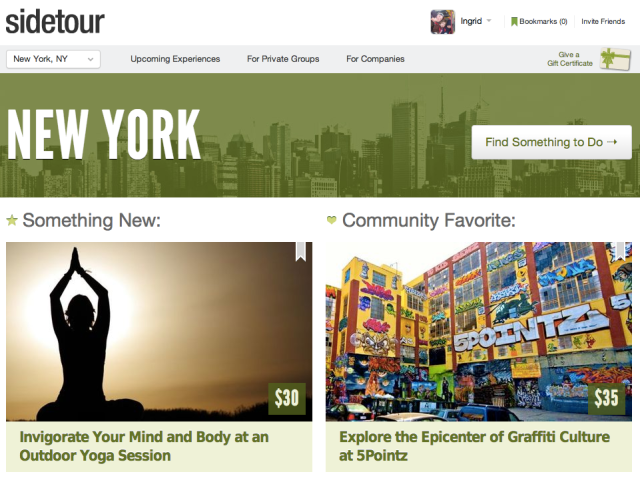 A little over a week after Groupon announced the acquisition of hotel booking service Blink, today comes one more purchase that moves Groupon further yet out of the realm of daily deals. Groupon has bought SideTour, a marketplace where people can book places for small-scale, bespoke activities, and post their own events, too.

Groupon says that SideTour will continue to operate as a separate entity “for some time” as its activity listings start to get distributed via Groupon’s email, web and mobile channels.

The SideTour team, as led by CEO Vipin Goyal, will work out of Groupon’s New York offices, reporting to Greg Rudin, GM of GrouponLive. This is the JV between Groupon and Live Nation, which first opened for business in 2011 focused on live event ticket deals, but appears to be diversifying into other kinds of events within Groupon’s wider deals database, which stood at a whopping 54,000 events as of Q2.

“The addition of SideTour’s curated local experiences furthers our vision of Groupon as the go-to place for consumers to find just about anything, anywhere, anytime,” said Rudin in a statement.

Groupon is not disclosing the value of the deal. Prior to this exit, Techstars alum SideTour had raised around $4 million from VCs including RRE Ventures and the Foundry Group.

SideTour has made a name for itself as a platform where people seek out special events that typically have no more than around a dozen other people in attendance. Activities include meals, wine tasting and cocktail-making tutorials in private homes, walking tours, and so on.

The idea here is to move away from cookie-cutter offers to appeal to those consumers who are willing to pay a premium for more unique events. If Groupon can convert more users to these more interesting offerings and away from at-cost discounts, that should help Groupon with its margins. It’s a trend we are seeing with other deals sites, too: just yesterday LivingSocial announced its own slate of new services that de-emphasized “daily” deals in favor of extended offers, including those in categories like travel and online coupons for different goods and services.

Competing with other sites that let users discover activities, such as Peek, SideTour differentiates itself by focusing on events led by experts (such as this ‘rom-com walk’ on the Upper West Side of New York led by two comedy writers; or this dinner cooked by a former chef from restaurant Aquavit).

Right now, SideTour offers some 500 activities across Chicago, New York, Philadelphia and Washington D.C. The plan, Groupon tells me, is to extend this to other cities where Groupon is active in the next few months.

Groupon should be able to use the SideTour platform in a couple of ways: first to offer more events for its users to buy; and second to connect with more local people (the smallest of the small merchants that Groupon targets) to do business on Groupon’s platform.

SideTour appears to have already a few events posted on Groupon, but this deal will likely see that number grow. Groupon has some 43 million active users, giving SideTour an obvious route to scaling up much faster than it would have done on its own, both in terms of people buying places at SideTour events, and experts posting activities to the platform.

“We’re thrilled with the opportunity to showcase our fantastic events to a huge audience with a demonstrated appetite for great local experiences,” said Goyal in a statement. “Groupon will extend our ability to find compelling and unique local experts and give them a platform to reach even more customers.”