Mozilla today launched the latest version of Firefox for Android. Version 24 introduces a number of new features, including tools for easier link sharing and support for WebRTC.

With the introduction of WebRTC on mobile Firefox, Mozilla has now caught up with Chrome for Android. Chrome users – both on the desktop and mobile – have had access to WebRTC in their mobile browsers for a while now. While most users won’t immediately get to use this new real-time communication protocol in their browsers, the fact that it’s now available in Chrome and Firefox on both desktop and mobile will likely give more developers the confidence to start writing applications for it. Firefox for Android will support all three WebRTC components to provide developers access to the webcam and microphone, as well as the ability to call other browsers and transfer data between them. 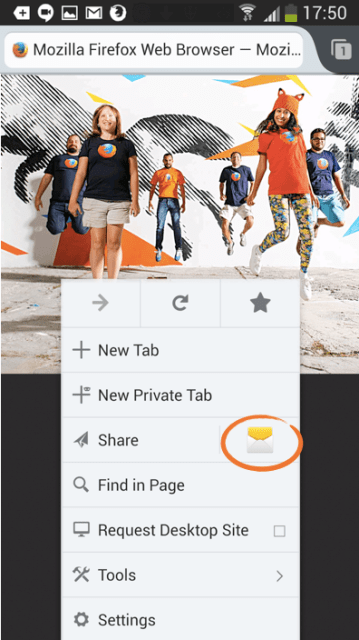 For sharing links, the Firefox for Android team introduces a new “quickshare” feature in the Firefox Share menu. If you regularly share links to Twitter, Facebook or through email or text messages, Firefox now lets you automate this. The browser will now automatically add your most frequent sharing service to the Share menu button, so sending your latest online discovery to your Twitter friends is just a click away.

Firefox for Android now also supports sharing over NFC. You can now just “bump” your Android phone with your friend’s, the company says, and share an open tab in just a few seconds.

The other Firefox for Android feature that’s getting an overhaul with this release is Reader, Mozilla’s relatively unknown distraction-free reading service with offline storage. Reader can now automatically switch between night and day mode, depending on the level of light in the room, and allows users to quickly switch between serif and sans serif fonts.

Other new features in today’s update include the switch to Baidu as the default search engine for China, as well Braille support and a number of improvements for TalkBack and alternative Android screen readers.