Apple’s Cupertino keynote is finally over, but the ensuing sea of stories that emerged from the event can still be a little tricky to navigate. We’ve written plenty of full-length stories discussing what exactly Apple has just revealed today (with more to come, I’m sure), but for your reading pleasure here’s a quick primer for everything Apple announced or unveiled over the past few hours — think of it as a TechCrunch TL;DR for the day’s Apple happenings. 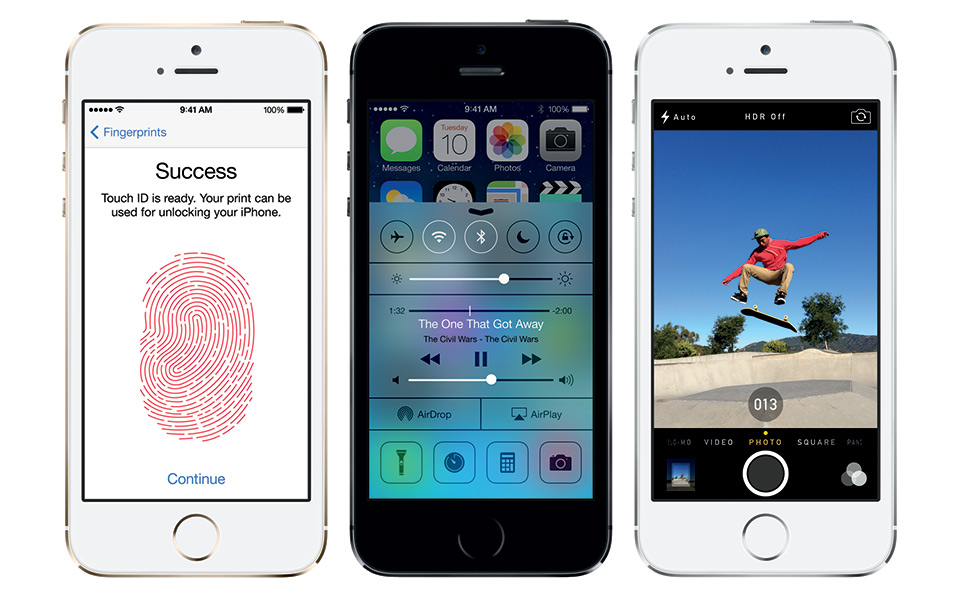 Apple finally revealed its two new iPhones, the iPhone 5s and the iPhone 5c. As the naming scheme implies, the 5s is the high-end successor to the iPhone 5 and it features (among other things) a snappy new 64-bit A7 processor, an M7 co-processor for tracking motion (you know, for fitness apps), and a Touch ID fingerprint sensor built into the home button. If it weren’t apparent at first glance, the 5s looks nearly identical to the original iPhone 5, though the black and white (sorry, silver) versions are joined by a gold model that was the subject of many a rumor in the weeks leading up to the event.

Also onboard is a much-improved camera — the 5s still technically has an 8-megapixel shooter, but it’s capable of capturing more image data thanks to a significantly larger sensor. That camera is also capable of shooting 120fps slow motion video at 720p, another feature that was teased in advance of the official announcement. Throw in the True Tone dual-LED flash for more accurate lighting and a 10 shot per second burst mode, and you’ve got yourself one heck of a mobile point-and-shoot camera.

All things considered it’s a pretty comprehensive upgrade to Apple’s venerable iPhone 5, but at this point it’s tough to see what sort of impact additions like the Touch ID will have down the road.

Curiously enough, it’s not the 4s that’s being removed from Apple’s lineup, it’s the year-old iPhone 5. It seems like a strange move considering it’s usually the oldest iPhone in the portfolio that gets the boot, but I suspect Apple didn’t want to split sales between the iPhone 5 and its slightly upgraded brother. You’ll be able to pick up a 16GB iPhone 5s for $199 on-contract, and the 32GB and 64GB models will cost $299 and $399 respectively with contracts on September 20. 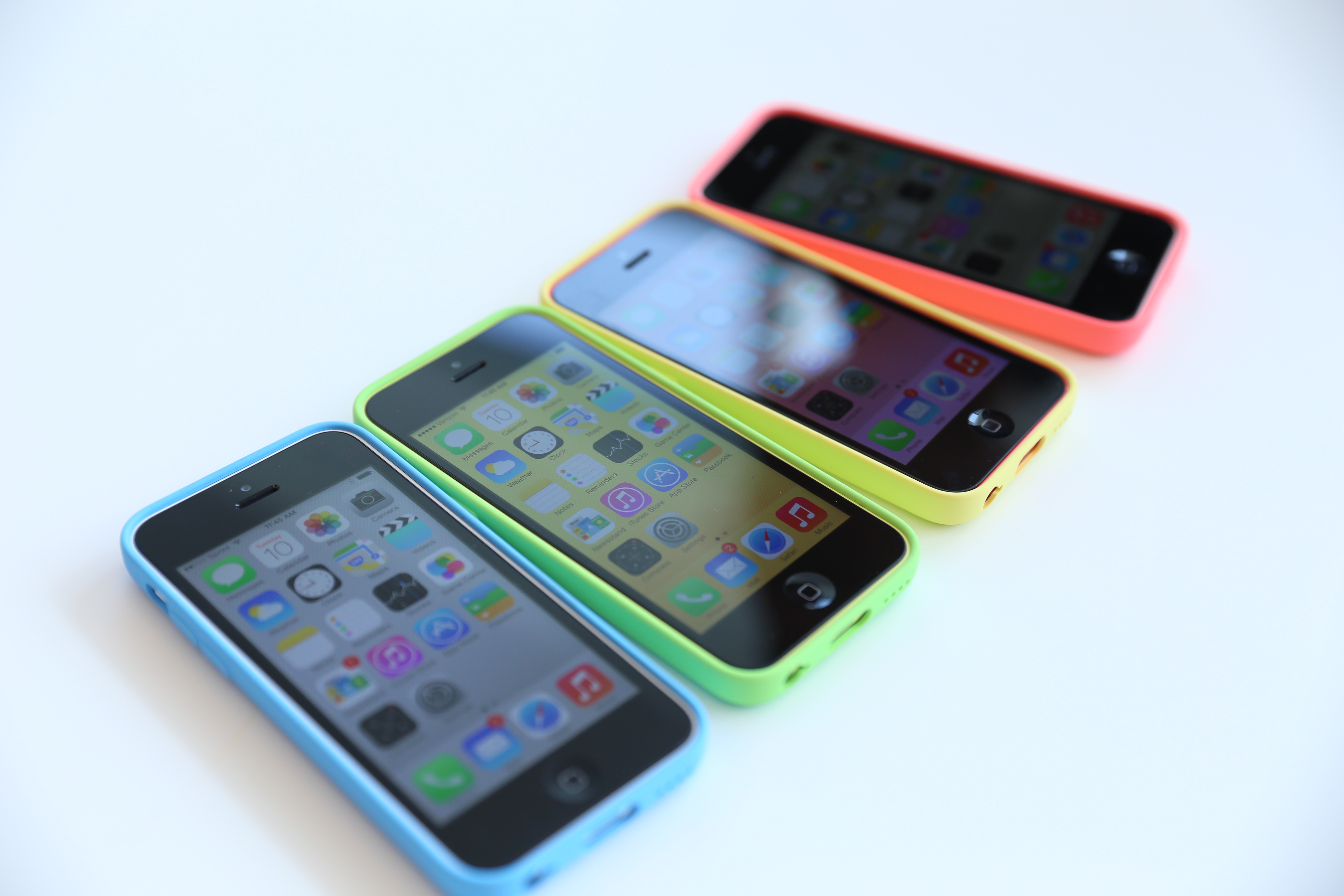 The 5c on the other hand is the budget model that was the star of innumerable rumors and leaks over the past few months (and even years). As most of us expected, the 5c is clad mostly in colorful plastic, but Apple played up a steel frame that’s hidden beneath the surface that helps with the device’s durability and acts as an antenna. While the 5c looks awfully different from the iPhones of years past, its innards are all pretty familiar. It shares the same 4-inch Retina display as the iPhone 5, as well as the same A6 processor, so it’s hard not to look at the thing as an iPhone 5 replacement — Apple essentially decided to split the iPhone 5 in twain and take those resulting devices in divergent directions.

It’s pretty cheap if you’re looking to sign a multi-year contract, but it’s considerably less so if you’re trying to buy one outright: the 16GB 5c will cost $549 sans contract and the 32GB version will cost $649. More reasonable than other models, sure, but it may not be the sort of developing market buster many of us were expecting before the thing was actually revealed.

Our very Darrell Etherington was on hand in Cupertino to get a feel for these new devices, and he seems understandably pleased with both. If anything though, he sees good things for the future of the 5c.

Based on my first impressions, I imagine the iPhone 5c will have plenty of fans when it goes up for pre-order on September 13 – this is a phone that offers a lot of value at its price point, and improves upon the iPhone 5, which is a first for Apple’s smartphone lineup mid-tier device. 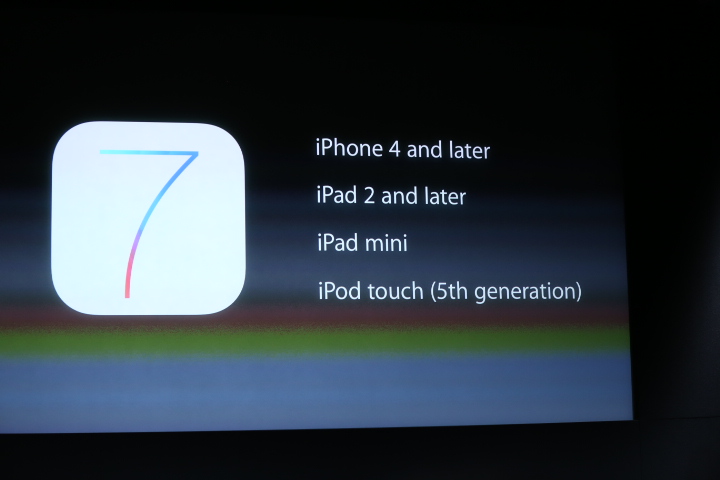 Today wasn’t just about iPhones. Apple also confirmed that the software that powers these new devices, iOS 7, will be available for the masses to download starting on September 18. Naturally, not every Apple iDevice will be able to run this new update, but a majority of the devices out there now can. If you have an iPhone or newer, an iPad 2 or newer, the iPad mini, or the 5th-gen iPod touch, you should keep your eyes peeled for an update notice in the coming days. We took a deeper look at what Apple had planned for iOS 7 when it was first unveiled at WWDC, but it’ll be interesting to see how the general public takes to the update.

If you’re a developer though (or friends with a developer who connected you to their account), you can taste a near-final version of iOS 7 right now — Apple had made the iOS 7 GM available to anyone brave enough to install it. As always, this new iOS update will be free for all, but that’s not the only freebie Apple announced today. Those who purchase a new iPhone, iPad or 5th-gen iPod Touch will also get free copies of iWork, iPhoto & iMovie applications (sorry, GarageBand will still cost you).