Today at TechCrunch Disrupt SF, Naval Ravikant of AngelList, Balaji Srinivasan of genomics startup Counsyl, and Cameron and Tyler Winklevoss took to the stage to discuss all things Bitcoin with TechCrunch’s own Kim-Mai Cutler.

Bitcoin is a topic that most don’t fully grok. That’s because when it comes up, blockchains, mining, algorithms and other sorts of words crops up. Don’t worry: Bitcoin is just “programmable currency,” as Ravikant put it. Essentially, think of Bitcoin as a form of currency that is digital, flexible and all but off the grid.

This means that Bitcoin can fit into places where normal currency has never managed to squeeze into. It opens new horizons. Srinivasan posited the following example as indicative of what Bitcoin can become: Imagine it’s a few years in the future, and you are driving down the road in an Uber, built by Tesla and auto-driven by Google software. You are in a hurry, so you decide to accelerate and pass the other cars. Your vehicle could then interface with the other cars, and pay them a sliver of Bitcoin to let you pass. You get where you are going faster, and everyone is happy. Programmable currency.

“People think about Bitcoin incorrectly,” said Ravikant. “They think about it as currency or about gold or hoarding, speculation, about how much money do you make. When really what it is is an API for programmable cash transactions. For the first time, the hackers in the audience have access to a protocol that allows them to program escrow and notaries and payouts and dividends… This idea of programmable, universal cash is what is really, really fascinating.”

Bitcoin has other advantages, as Srinivasan also noted: You can cross the border with $1 billion in Bitcoin in just your head, and no one can sniff it out. No number of meddling TSA agents or cash-sniffing dogs can stop you.

The main risk with Bitcoin, according to the panel, is governmental regulation leading to the demise of the currency as a whole. The Winklevoss twins were not opposed to regulation, provided that it remains fair, but Bitcoin, in its bid to wrest some control of the financial world from nation-states, could hit stiff regulatory headwinds. Who wants to give up power?

That said, Bitcoin, it was agreed, will have something of a binary outcome: Worth something, or worth nothing. So unmoored from other financial instruments as it is — which is usually considered to be to its credit, not debit — Bitcoin is inherently more risky than other forms of investment. That freedom and flexibility, however, is the ball game.

But provided that Bitcoin does become the de facto programmable currency of the Internet, transaction volume and sheer interest alone will keep its value above zero.

Turning to more fundamental security and the theft-related risks that continue to affect the cryptocurrent (or at least its reputation), Srinivasan was bullish, describing Bitcoin as safer than gold — in other words: “You’ve got to break into a bank and then break a password.” Ravikant rowed back on that a little, pointing out that the security of your Bitcoin savings is of course only as robust as your password. “If you use a bad password, your Bitcoin will get stolen,” he said.

Ravikant also discussed the overall security of the Bitcoin protocol/blockchain. His view? “It’s probably easier and cheaper to counterfeit hundred-dollar bills than it is to counterfeit Bitcoin.” 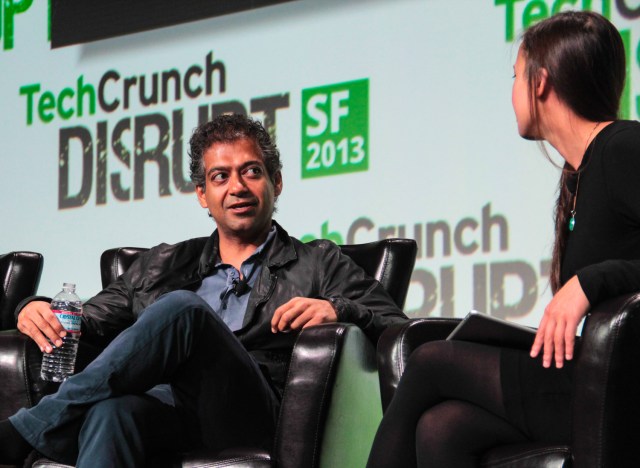 How To Invest In Bitcoin: Build Or Buy?

There are three ways to invest in Bitcoin, according to the group: Directly into the currency; into mining new Bitcoin; or setting up exchanges to help others trade in Bitcoin.

The first is the purest play into betting that a sheer price increase per coin is coming. The second is a wager that the efficiency of your computing setup can make the process worth your investment. And the final is a wager that more can be made selling shovels to gold miners than from mining gold yourself.

This becomes more interesting when one’s portfolio increases in size: If you had, say, $1 billion to invest into Bitcoin — a ludicrous sum given that all Bitcoin is currently worth around $1.5 billion — it would probably pay off most handsomely to invest in each segment: Mining to ensure new supply, as well as direct purchase to ensure a meaningful stake and in exchanges to ensure market liquidity. The market as a whole is doing that in pieces, surely, but perhaps not as quickly as it would like.

Why is that? As Ravikant noted, investing into Bitcoin is hard for certain classes of investors. Venture capitalists, for example, can’t use LP funds to buy currencies. That’s not what the money was provided for. So, cynically, the panel joked, we have venture capitalists buying Bitcoin with their own money that are also using LP cash to invest into companies that are helping to build and grow Bitcoin (exchanges). Thus their former bet might be born of the latter. Nice work if you can get it.

The average person can only mine or buy, but if you have the proper sums, the possibilities are interesting.

Where Is The Price Going?

Bitcoin is interesting because there is a hard cap of how many there can be: (roughly) 21 million. Therefore we can estimate the total value of all Bitcoin possible by simple multiplication: 21 million times Bitcoin price equals the entire ecosystem value.

Not all Bitcoins are yet mined. But let’s assume for now that they are. Srinivasan noted that, at a price of $1,000 per coin, there are about $21 billion in total Bitcoin value. At $100,000 per coin, Bitcoin is worth more than all gold. $1 million per coin, and Bitcoin is equal to the United States GDP. Staggering sums.

Bitcoin’s current price is $133. It’s been higher, it’s been lower. Buying into Bitcoin now is a bet that it will rise again. That will likely hinge on the ability of the currency to become functional in a number of settings. Can it be integrated?

The panel agreed: For now, Bitcoin remains too hard to purchase and use. The twins have a partial solution, in that they want to launch a tracking fund for Bitcoin to allow retail investors to have their slice of the currency sans the need to grok the technical fundamentals. Albeit they’ve run into some, you guessed it, regulatory headaches.